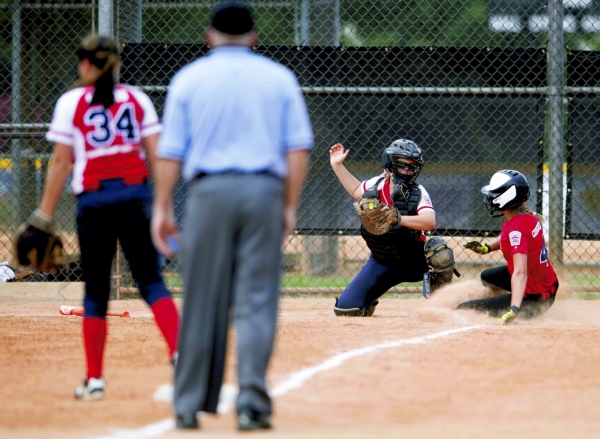 JON C. LAKEY / SALISBURY POST Rowan 14U Junior Little League’s Lauren Coughenour slides into the plate before the catcher can make the tag during a game against Virginia on July 23. Rowan 14U lost to Ohio, 13-4, Monday.

Rowan Little League’s undefeated 12U softball team repeated as Southeast Regional champs on Monday morning, and the team now will get a chance to defend the World Series title that captured the imagination of area sports fans last summer.
The 12U World Series again will be held in Portland, Ore. The event starts on Aug. 8.
Rowan, which had earlier topped West Virginia, South Carolina and Tennessee, beat the Virginia champs, Atlee/Ashland, 6-2, in the regional final played in Warner-Robins, Ga.
Virginia got off to a quick start and scored two runs with three consecutive hits to open the game. But Rowan pitcher Taylor Walton struck out the next two batters and caught a line drive to end the inning.
Virginia wouldn’t score again, and Walton would allow only hit the rest of the way.
Rowan scored three runs in the bottom of the first. Allison Ennis walked and scored on an error. Walton drove in Kary Hales with a hit, and Brooke Kennerly put Rowan ahead, 3-2, with a single.
Ellen Yang’s single, Tate Barger’s triple and Ellie Wilhelm’s single pushed Rowan’s lead to 5-2 in the third.
Rowan made it 6-2 in the fifth, executing on a double steal with runners at first and third.
Rowan outscored four opponents, 41-6, in the regional. Walton was the winning pitcher in all four games. She allowed four earned runs.

14U World Series
In the 14U Junior League World Series in Kirkland, Wash., Rowan Little League fell behind, 5-0, in the first inning against the Central USA champs from Ohio, and lost 13-4.
Rowan got back as close as 5-3, but Ohio’s four-run fourth put the game out of reach.
It wasn’t a disastrous loss in pool play. Four of the five teams from each of the two pools will advance to the next round. Rowan won against the Philippines on Sunday and is 1-1 in pool play.
Hailey Lane had three of Rowan’s nine hits on Monday. Lucia Barbon drove in two runs.
Aubrey Tuell and Annisten Christensen pitched three innings each.
Ohio pitcher Brooke Bobbey pitched a complete game and struck out six. Lauren Sienkiewicz drove in three runs.
Rowan takes on the host team, Kirkland, Wash., today at 2 p.m. (Eastern). Kirkland also is 1-1, beating the Philippines but losing to Canada.
Rowan plays its final pool game at 1:45 p.m. on Wednesday against Canada (1-1).