Hardly unconstitutional: Trump’s ideas may be bad, but not illegal 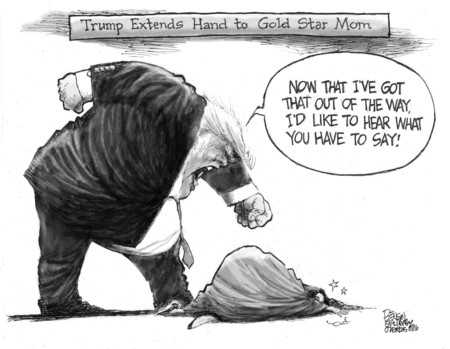 There’s a sensation building over the Democratic convention speech of Khizr Khan, a Pakistani-born Virginia lawyer whose son Humayun was killed in action while serving as a captain in the U.S. Army in Iraq in 2004.

In seven minutes on the national stage, Khan, a naturalized U.S. citizen who came to this country in 1980, excoriated Trump for proposals to build a wall along the Mexican border and to temporarily ban the entry of foreign Muslims into the U.S.

“Let me ask you: Have you even read the United States Constitution?” Khan said to Trump. “I will gladly lend you my copy. In this document, look for the words ‘liberty’ and ‘equal protection of law.’”

Even before Khan’s speech ended, Democrats and anti-Trump Republicans began to issue rhapsodic praise on social media and elsewhere. Video of the speech went viral, along with commentary that it was the best of the convention, the most moving, the most powerful, the most devastating to Trump, and so on. Khan, who ended with an exhortation to vote for Hillary Clinton, became an instant star of the campaign.

At the same time, some Trump supporters stirred outrage with foolish attacks on Khan. Ann Coulter tweeted, “You know what this convention really needed? An angry Muslim with a thick accent like Fareed Zakaria.” The American Family Association’s Sandy Rios said Khan’s loyalty to the U.S. is in question. Then Trump himself downplayed the Khans’ sacrifice in an interview with ABC News.

With a few obvious differences, the uproar bears some resemblance to a white-hot controversy more than a decade ago involving Cindy Sheehan, a California woman whose son Casey was killed in 2004 while serving in the U.S. Army in Iraq.

Now, with Khan, the parents of another son killed in Iraq are in the middle of a national storm. But this one is over immigration. Like Cindy Sheehan, as the father of an American soldier killed in action, Khizr Khan has standing to do what he is doing. Those who disagree with him should never belittle his sacrifice or impugn his motives. But they can challenge his argument.

It’s hard to know what Khan meant by suggesting a wall on the Mexican border would be unconstitutional. Perhaps it would be a bad idea, or it wouldn’t work as Trump claims it would, but there’s simply no sense in which a border wall violates the Constitution.

As far as a Muslim ban is concerned, Trump has recently amended his proposal to focus on immigration from countries “compromised by terrorism.” But assume that Khan was addressing Trump’s original, more extensive, proposal: a temporary ban on foreign Muslims from entering the United States. By telling Trump to “look for the words ‘liberty’ and ‘equal protection of law’” in the Constitution, Khan was suggesting that the ban would violate the 14th Amendment. This is the relevant portion of that amendment:

The text makes clear that its protections apply to “all persons born or naturalized” in the U.S.; persons “subject to the jurisdiction thereof”; and persons “within its jurisdiction.” None refers to foreign persons in foreign countries.

It may be that building a wall, deporting illegal immigrants, and temporarily banning the entry of foreign Muslims are all terrible policies. But among the Democrats and anti-Trump Republicans touting Khan’s performance there appears to be a belief that if something is a terrible policy, it must also be unconstitutional. That’s not necessarily so.

It should be noted, though, that Trump’s proposals are not unconstitutional according to the way the Supreme Court has interpreted the law for the last 225 years. If a President Trump acted on his proposals and was challenged in court ­— as he certainly would be — there would always be the possibility that the justices might make up some new reading of the Constitutional to invalidate the president’s actions.

Humayun Khan was one of just 14 Muslim-Americans (the number was compiled by the House Homeland Security Committee) among the 6,885 U.S. troops who have died in Iraq and Afghanistan. But his parents’ anguish is very real and their story very powerful. And it will undoubtedly be used against Trump many times between now and November.

Requiem for the VCR