County wants new signs at I-85 entrance to Rowan 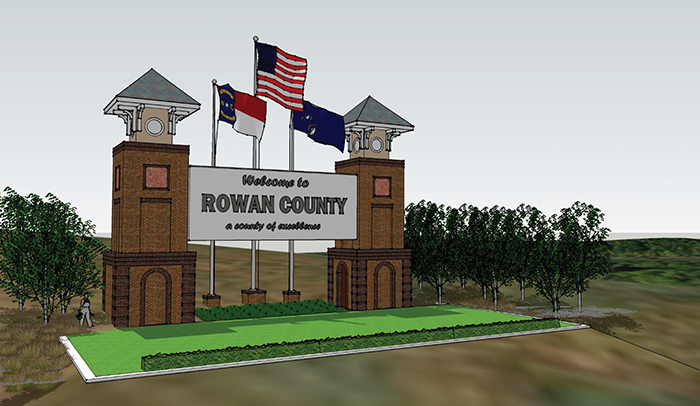 Tying the idea to the county’s ongoing rebranding, Edds on Monday presented renderings of proposed entrance signs to Rowan County on Interstate 85. One would sit adjacent to the interstate at each end of the county.

Drawn by local architect Bill Burgin, the signs would be identical and contain two brick towers with U.S., state and local flags and elements symbolizing the county. Burgin used stone from local granite quarries as an example.

“You won’t miss the sign,” Burgin said. “It will make an impression. No question. And, honestly, I believe that this county and this community are not really taking advantage of the exposure we get from (Interstate) 85, which is the biggest artery in the state.”

As inspiration for the sign, Edds said he brought Burgin a picture of an entrance sign on Interstate 77 near Rock Hill.

“I basically brought him the picture and told him to double it,” Edds said about the design.

Edds said he didn’t get input from local residents about the sign’s design. However, he stressed the potential local elements that might be included. Exact details of the entrance sign may change as the county wraps up its rebranding.

He said motorists and businesses “may be intrigued” by the sign and stop in Rowan County.

“Holy cow, who are these people?” Edds said, imagining what a business or motorists might say in response to the sign.

He cited recent survey results from the rebranding as evidence that Rowan County could make an impression with its sign. The survey showed that 40 percent of people surveyed from Charlotte to Raleigh think positively, 10 percent think negatively and 50 percent have no opinion.

He used the Peachoid in Gaffney, S.C. as an example of the impression Rowan County’s sign could make.

“If we’re talking about branding and getting folks to remembers Rowan County, I don’t know anything about Gaffney but that they have a peach,” he said.

Edds estimates the cost of the signs to be $325,000 each. However, he and commissioners Vice Chairman Jim Greene have solicited and secured $171,000 in donations from local businesses to help lower the cost of construction. Instead of money, some businesses have agreed to make an in-kind contribution.

For example, local company Taylor Clay Products has agreed to provide any bricks necessary for the structure, Edds said. KMD construction has volunteered to pay for contractor fees, Edds said. The N.C. Department of Transportation has committed to do landscaping for the signs.

Any costs not covered by donations from private businesses would be paid for using economic development money generated through a recently implemented tax on services such as car repairs.

During their meeting on Monday, Rowan County commissioners voted to continue with the sign project. Specifically, they unanimously voted to direct County Manager Aaron Church to begin the process of building the sign and send a design to the N.C. Department of Transportation for approval.

Edds hinted that an interstate sign at the northern end of I-85 would likely be completed before one in south Rowan because of an interstate widening project in the area.