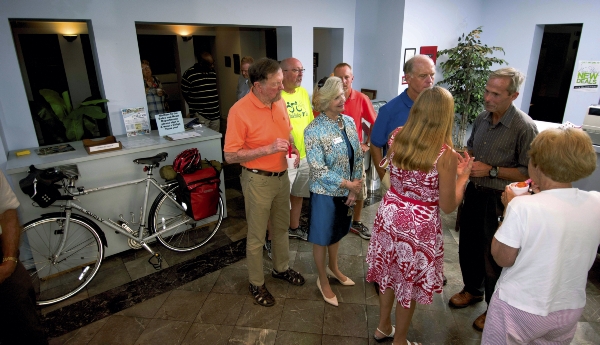 JON C. LAKEY / SALISBURY POST A reception was held for David Freeze (right) at the Salisbury Post on Monday evening after his most recent cross country solo bicycle trip. The latest trip traversed the United States along the famed Route 66. Monday, August 1, 2016, in Salisbury, N.C.

Why? Because he’s already conquered Route 66.

Back in Rowan County after riding the famed “Mother Road” from California to Chicago, Freeze greeted dozens of local residents at a reception Monday at the Salisbury Post.

In what has become an annual tradition, this was Freeze’s fourth summer cycling adventure. Previously, he’s ridden from the West Coast the East Coast, along the Eastern Seaboard from Maine to Key West, Fla., and the route of the Underground Railroad.

This year’s route took 38 days to complete. Freeze crossed the Mojave Desert, rode through 117-degree heat, took in a multitude of the well-known attractions along Route 66 and, as always, made a lot of new friends.

Over the course of the four trips, Freeze has pedaled nearly 13,000 miles. And for Post readers, his dispatches from the road have become a favorite summer treat — just like the ice cream he loves to eat along the way.