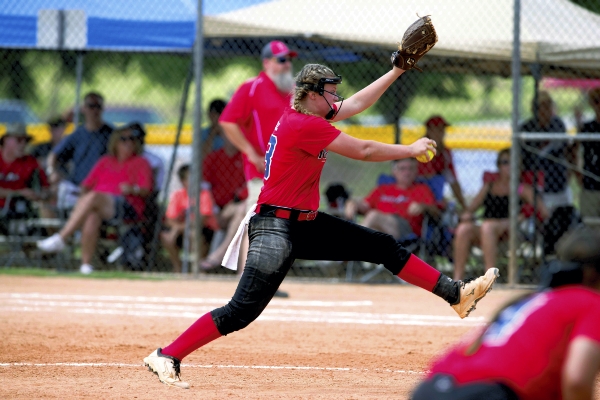 Rowan Little League’s softball teams stayed on a roll on Sunday.
The 12U team, that’s the Steve Yang-managed team with many World Series veterans, battered Tennessee, 9-2, and advanced to the Southeast Region championship game that will be played Monday morning at 10 a.m. in Warner-Robins, Ga.
Rowan’s opponent will be Virginia, a 5-4 winner over Tennessee on Sunday night. It will a single game for the regional championship. The winner goes on to the World Series to be played in Portland, Ore., on Aug. 8-17.
Taylor Walton did a lot of the damage for Rowan on Sunday, pitching a complete game and delivering the key hit.
The game was still scoreless in the third when Walton’s two-out, two-run double drove in Kaylin Dowling and Caylie Keller. Ellen Yang followed with a hit for 3-0 lead.
It stayed 3-0 until Rowan put together a six-run fifth. The inning started with a walk to Kary Hales. A double by Walton put two runners in scoring position, and Yang knocked in her second and third runs of the game for a 5-0 lead. Ellie Wilhelm, Dowling and Keller had hits as the lead swelled.
Tennessee got two runs in the sixth.
Both teams had nine hits, but Rowan’s hits were more timely, and Rowan played errorless defense, while Tennessee had four miscues.

14U World Series
Rowan Little League is playing in a five-team pool and won its opener on Sunday evening, beating the Far East/Pacific champs from the Philippines, 6-1.
Wearing gold uniforms and representing the Southeast USA, Rowan got a strong pitching performance from Aubrey Tuell. She held the Philippines to two hits and fanned nine in six innings. Annisten Christensen pitched the seventh and struck out two more.
Tuell had a no-hitter until the fourth.
“There were some jitters for the first game, no doubt about that, and the pitcher (Alexandria Romero-Salas) we were facing might be as good as anyone we’ll see out here,” Rowan manager Johnny Meadows said. “I haven’t seen many pitchers who could move the ball around like she did. She put a lot of pitches just above our hands, and she had a great changeup.”
Rowan scored three runs in the first inning. Olivia Marshall walked and a solid hit by Hailey Lane put two on. With runners at second and third, Jentri Meadows slapped a roller to third and a throw home was wild, allowing Marshall and Lane to score. Amara Harrell’s sac fly made it 3-0.
Rowan made it 6-0 with a three-run fourth. Kali Morton reached on an error to start the inning. After pinch-runner Christensen stole second, Ally Young singled up the middle for a 4-0 lead. Marshall then lined a single that got past the left fielder, allowing Young to score from first and Marshall to reach third. Another sac fly by Harrell scored the final run of the inning.
Marshall made the key defensive play in the sixth when the Philippines scored its only run. The second baseman fielded a groundball, tagged a runner and threw to first to complete a double play.
“That inning was the only scare we had,” Meadows said.
Marshall, the leadoff batter, keyed Rowan’s offense with two hits and two walks in her four trips to the plate.
“We’re excited about getting the first World Series win for Rowan Little League in this age group,” Meadows said.
Rowan plays against the Central Region champs from Ohio today in a game that starts at 4:45 p.m. (Eastern). Ohio won against Canada, 7-6, in the first round.