DART: Here’s a story of Pauline and George Blalock 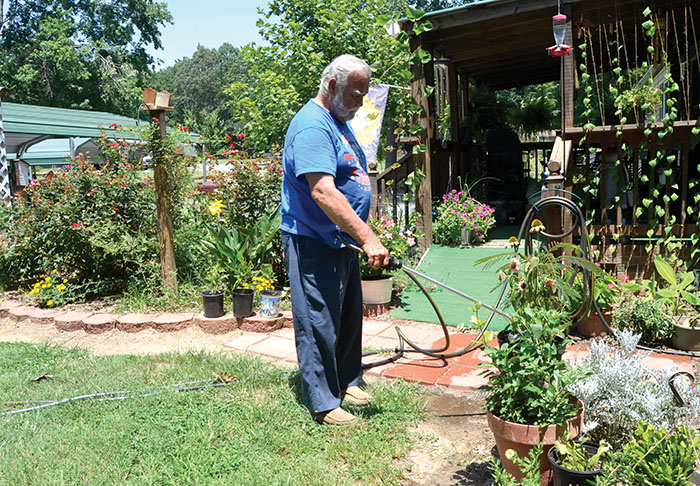 George Blalock waters some plants in his backyard where he and his wife, Pauline, spend a lot of their time. The couple's backyard had no flowers until they moved in and made it into a garden and place for family gatherings. Shavonne Walker/Salisbury Post

GOLD HILL — These days, Pauline and George Blalock can be found tending to various plants in their front and back yard because Pauline finds it enjoyable. When it’s hot like it was a week ago, her husband gives her a much-needed hand.

The couple, originally from Stanly County, have lived in Gold Hill for four years. They moved from Holden Beach, where they had a house, after being there a number of years.

“We had a nice little place. It was right off the inlet,” Pauline said.

Although the two loved living at the beach, they missed family and wanted to move back to the area. A friend found the home they presently live in, on Liberty Road.

George said he’s known Pauline practically all of his life.

After Pauline separated from her first husband, she raised her children on her own. Eventually she had a reconnection with George Blalock, who separated from his wife. George had graduated from North Stanly High and gotten married right after.

The marriage didn’t work out, but it allowed him to meet Pauline. He entered into the U.S. Marine Corps for several years, serving in the Reserves, but was discharged after he was diagnosed with thyroid disease.

Both are now retired, but recall fondly what it was like in the working world — Pauline was a typist for the CIA and George traveled over 80 miles a day to work at Duff Norton in Wadesboro.

He eventually went to work at Metal Forge in Albemarle.

Pauline’s sister passed a Civil Service test at then Pfeiffer College, got a job in Washington, D.C., and then encouraged Pauline to also take the test. Both women worked in Washington.

“I just typed what they gave me,” Pauline said.

She had to go to a session that included instructions on what she could say outside the CIA walls.

In recent years, Pauline has worked on and off, and most recently, she has been washing dishes at Wink’s Barbecue.

“We stay busy,” Pauline said. “We really do. We got a little garden out back. We just have a good time planting.”

When the Blalocks moved to their property, there was nothing but stumps in the front yard. They’ve since removed them and planted flowers.

Pauline is always planting flowers. She goes to the nursery often to buy new plants. She promises herself she won’t buy anything new, but then comes home with plants.

“He helps me water them. He keeps me out of trouble,” Pauline joked.

The back yard is a flower lover’s dream and a place where the Blalocks have lots of family gatherings.

Pauline removes the flower pots on their three picnic tables and the family eats their meals together.

Sometimes at family gatherings when it’s cool outside, the family will sit on the swing around the fire pit.