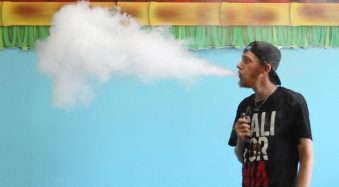 SALISBURY — Jeff Rogers started smoking when he was 12 years old. After some health problems, including a stroke, Rogers’ neurologist suggested switching to vaping to help him quit.

He started out vaping one of the highest nicotine levels he could get. Now he is down to a 1.5 milligram level.

In 2014, about 3.7 percent of adults used an e-cigarette daily or some days, according to the U.S. Food and Drug Administration. In that same year, more than 3 million middle and high school students were vaping, an increase from about 2.46 million the previous year.

In Salisbury alone, there are at least four different places where a person could buy vaping products.

Electronic cigarettes and vaporizers are becoming more and more popular every day. There isn’t enough research currently to determine whether they are a good way for people to stop smoking, but anecdotal stories are out there.

Now, the FDA is proposing new regulations on e-cigarettes and vaporizers to go into effect on Aug. 8. The new regulations don’t bother some vape shop owners but they are making others a little nervous.

The term vaping is used to describe the act of inhaling vapor from a battery-operated electronic cigarette, or e-cigarette, or vaporizer device. Customers can choose from a wide variety of e-liquid flavors to use in the devices, which contains propylene glycol, glycerin and other ingredients, according to the FDA. The battery heats up the e-liquid and turns it into a vapor, which the user then inhales.

E-liquids may or not contain nicotine. Paul Radziewicz, owner of Rolling Fog Vapor Co. at 1945 Jake Alexander Blvd. W. which opened in May, sells e-liquids with nicotine levels of zero to 24 milligrams.

Vape shop owners and employees cannot sell e-cigarettes or vaporizers to their customers as smoking cessation devices. For those who do use them to help them stop smoking, Radziewicz said he starts customers on a higher nicotine level of e-liquid and then sells them lower nicotine levels to wean them off slowly.

“The main reason we opened up was to help people stop smoking,” he said.

Most of his customers are from the older generation of smokers trying to quit, but he does get younger customers. Under North Carolina law, e-cigarettes and vapor products are included with other tobacco products and cannot be sold to customers under 18 years old.

Harrison Bryan, manager of MadVapes at 255 Faith Rd. which opened in June of last year, said e-cigarettes are good for those looking for nicotine without the other chemicals in cigarettes.

“It’s a way to get your nicotine without killing yourself,” he said.

According to How Stuff Works, e-cigarettes don’t have the harmful chemicals that cigarettes have, and they also don’t leave the lingering cigarette odor.

Jeff Rogers, owner of Beach ‘N Vapes at 1810 E. Innes St. which opened in January of 2014, said switching to vaping changed his life. He breathes and sleeps better.

His wife JoAnn is not a smoker and started the business to help her husband and other customers quit. She said there have been customers who they have lost because they were able to kick the habit.

She said they actually sell more e-liquids with no nicotine in them now than when they started. Their No. 1 seller is 3-milligram nicotine content e-liquids.

E-liquids or juices come in a variety of flavors, including fruit and cereal flavors. The sweet flavors lead some to believe the products may appeal to children and serve as a gateway into cigarette smoking.

JoAnn Rogers said the different flavors are made for adults to enjoy.

“We looked at it as an escape from (cigarette smoking) rather than a gateway into it,” she said.

Many of the vaporizers have locking mechanisms on them and e-liquids have child-proof caps.

There have also been instances where vaporizers have exploded because of overheated lithium-ion batteries.

Jeff Rogers said issues occur when consumers are not properly educated about the products or when they try to make or modify them.

For consumer protection, the FDA is adding e-cigarettes and vaporizers to its list of regulated products. Shops will not be able to sell to people under 18 years old and require customers to show photo ID for verification, which shops in North Carolina are already required to do. Other requirements include not giving away free samples of e-liquids, reporting ingredients, including those that are or may be harmful, registering manufacturing establishments and giving product listings to the FDA and putting health warning labels on packages.

The regulations go into effect on Aug. 8.

“I think the regulations coming about are a good thing,” he said.

JoAnn Rogers said the regulations will give customers the comfort of knowing the products they are buying are safe, especially since without regulations sellers can make their own e-liquids.

“I think this will clean up the legitimate businesses,” she said.

Both Jeff and JoAnn said they believe vaping can be a good alternative to smoking if the person is committed to quitting. All of their employees were previous smokers and now they only vape. That includes employee Jason Memon, who smoked for 10 years. He has been vaping for three months and has only fallen off the wagon one time.

Memon said it hasn’t been easy and he has gone through some withdrawal symptoms, but he is close to being on a nicotine-free e-liquid.

JoAnn Rogers said creating life-long customers is not her goal. She wants people to be able to quit smoking and stay away from nicotine for good.

“I hate to see them go but I’m so happy for them,” she said.