Red and blue, me and you: Two-party couples find ways to cope 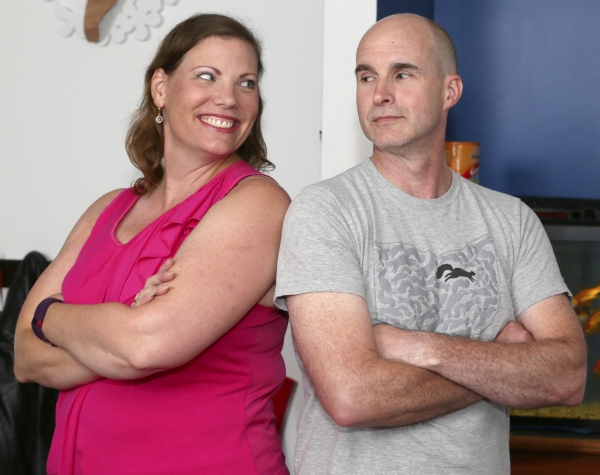 Wife and husband Laurie Herington and Rick Reese are at opposite ends of the political spectrum: she’s a liberal Democrat and he’s a conservative Republican. Michael Chritton/Akron Beacon Journal/TNS

(TNS) Laurie Herington is a liberal Democrat, offering her electric car as evidence. Her husband, Rick Reese, leans the other way — saying he isn’t exactly pro-Republican but he is definitely anti-Democrat. Their four children from previous marriages are also split evenly between Democrats and Republicans. The tiebreaker would be their daughter Veronica. But she’s 6.

Politically divided couples are at times viewed as novelties, with James Carville and Mary Matalin held up as a rare example. Yet families like Herington and Reese’s, though far from the majority, are not uncommon. A recent study of “mixed partisan” households — where couples divide into Democrat and Republican, or one spouse is the member of a political party and the other is independent — concluded that about 3 in 10 married pairs fit that category.

Emotions in those couples may run high. The political-analysis site Sabato’s Crystal Ball has observed that, in this volatile presidential campaign, “we could see the largest gender gap in modern history.” Turning down an interview request, one woman said her husband “gets too irate over political subjects” and they seldom talk about them.

‘It’s not a priority’

Indeed, the study — by Eitan D. Hersh of Yale University and Yair Ghitza of Catalist, which manages a national database about voting-age people — found that 60 percent of Americans don’t talk politics regularly.

During a chat in their Ravenna, Ohio, home, Herington and Reese said that politics did not come up when they first met. Still, he had to navigate Herington’s family — her father is veteran Democratic politician Leigh Herington — and dryly noted, “He tried to indoctrinate me in whatever cult they’re in.”

They do disagree. Reese said Donald Trump “is going to be a better leader than Clinton,” while Herington called Hillary Clinton the best qualified candidate based on her long governmental experience. And they are well aware of how the other will vote; Reese referred to his voting as playing defense, to cancel out Herington. (Hersh and Ghitza, in contrast, said mixed partisanship can lead to lower voter turnout than in relationships where couples agree politically.)

Still, Reese said, “It’s really not a conflict. … It’s not a priority in our relationship.”

“At the end of the day we know we care about each other, (and) we’re here for each other,” Herington said.

Besides, politics is very fluid, especially these days. Hersh and Ghitza said that “80 percent of Americans … do not have consistent ideological beliefs.”

‘Try to make an effort’

John Semilia of Stow, Ohio, embodies that. He was “never very political” when he and Lisa Craig met. A self-described independent, he described a journey that involved voting for Democrat John Kerry in 2004 because he despised George W. Bush, then elections that took him to the Libertarian Party, followed by interest in Republican candidate Ron Paul, who ran for president in 2008 and 2012.

“I never considered myself a Republican,” said Semilia, but this year he plans to vote for Trump. “The more I heard him speak … I felt like he was very genuine and sincere. He was speaking to what I really thought were the problems in this country.”

Craig, meanwhile, has consistently been a Democrat, and this year is backing Clinton. When Semilia wants to watch a Trump speech on TV, she’ll go to another room. “I’m definitely the more emotional of the two,” she said.

At the same time, in calmer moments, she asks her husband what he is thinking. “To this day, that’s one of our secrets. I really want to know why. John is very thoughtful. He researches. He listens. When John has an opinion, there’s reasons for it, and I am open to those reasons.”

“We’ve been on the same side a lot of times,” Semilia said. Besides, he added, “We have so many other things in common. We love sports. We love animals. … I try to make an effort, and she does, to do things that we enjoy doing together.”

And sometimes couples end up in the same place. Katie Singleton of Ellet is a longtime Republican, more conservative than Shawn Singleton, her “Democratic liberal” husband.

“Initially when we were dating, (politics) wasn’t talked about as much,” Katie said. But Shawn has moved closer to her views and, she said, “After he ‘saw the light’ things were more agreeable.” Now they watch the news together and discuss how events will affect their family, Shawn said.

But the current campaigns distress them, and they said they’re more likely to vote for the Libertarian candidate, Gary Johnson, this year.

“At this point, I feel like both parties are broken,” Shawn said. Katie added: “Trump is petty and disgusting. Hillary is a criminal. Neither are candidates I’d choose.”

So families can find ways to work out, or around, political differences.