When the next generation chooses to keep the family business going 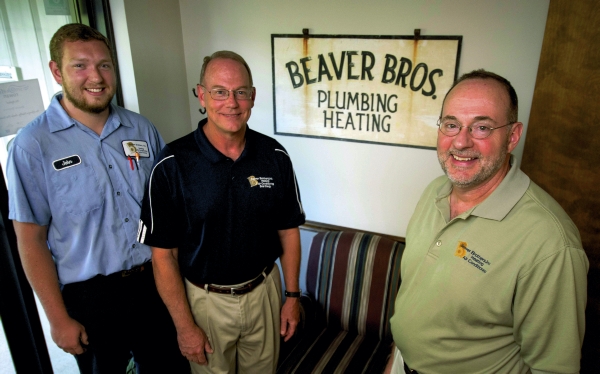 JON C. LAKEY / SALISBURY POST John, Mike and Trip Beaver pose for a photo in the lobby of the company office on Corporate Circle. Beaver Brothers Inc. has been operating in Salisbury since 1919 in the heating and air conditioning business. Brothers Trip and Mike Beaver have worked for the company for many years. Mike's son John has grown up in the business and says he has done a little bit of everything.

SALISBURY — John Beaver wasn’t sure at first, but when he graduated from college in May, he was ready to join his family’s business, Beaver Brothers heating and air conditioning.

John spent a lot of time at the office as a child and worked there during the summers. As he grew up, he went back and forth on whether to work with his family.

“I’ve gone through different phases and different things I’ve wanted to do,” he said, “but I’ve always just seemed to come back to this.”

There are several businesses in Salisbury and around the county that have been passed down through the generations. As children and young adults, not all family members are sure that following in their ancestors’ footsteps is the right path for them, but for some it ends up being the right move.

Back in 1919, Beaver Brothers was just starting out as a plumbing and hydronic heating company. Clarence Beaver Sr. and H. Clifford Beaver started the business, and it has continued to stay in the family for 97 years. John Beaver is the fourth generation of Beavers to join the company and carry on the family legacy.

Getting in the business

Like John, his father Mike Beaver finally decided on joining the family business when he was in college.

“It’s kind of funny because I always said I wasn’t going to go back and work in the family business,” he said.

Mike went to North Carolina State University and started taking classes in nuclear engineering, but soon realized he did not like it.

Like his own son, Mike worked at Beaver Brothers with his father Clarence Beaver during the summers. He became interested in a solar energy system Clarence was installing during one of those summers.

Mike stuck with engineering, but added on architecture and business courses to prepare himself for Beaver Brothers. He officially started with the company in 1978 and is now the president of the company.

Mike’s brother Trip Beaver, who is now president of sales, started with the company in 1979. He also went to N.C. State and graduated with a degree in physics.

Trip’s original plan was to get his doctorate in physics, but he changed his mind and got into the business instead. Trip said the science and math part of the business appealed to him.

“…I was very attracted to starting our air conditioning part of our business here in 1979,” he said.

It wasn’t just the Beavers who hesitated when it came to the family business. William “Summie” Summersett Carter did not originally want to work for his family’s business either. Instead of going right into working for Summersett Funeral Home, Summie said he worked in finance for seven years.

It was only when Summie and his wife Debbie decided to move back to Salisbury from South Carolina to raise their family that he changed his mind.

“My father wanted me to come back and help him run the business, so that’s how I kind of ended up in it,” he said.

William Benjamin Summersett started the business. His son Thomas Walter Summersett Sr. separated the funeral business from the furniture business in 1907. When the business was incorporated in 1930 as Summersett Funeral Home, Inc., it also served as an ambulance service for the county.

In 1926, Thomas Walter Summersett Jr. and brother-in-law John Rusher joined the staff. Summersett’s son-in-law, Donald Carter, joined the business in 1941, and Carter’s youngest son, Summie, is now the owner of the business.

Summie’s children, Kristen Carter Barber and Staton Summersett Carter, are the fifth generation of the family to work at the funeral home.

The last family member with the Summersett surname, Libby Summersett, passed away recently.

Kristen Carter Barber joined her father and became a funeral director in 1999.

Staton Summersett Carter joined after his sister did, but his first choice of careers was not funeral directing. After he graduated from Appalachian State University, he did other things like real estate appraising.

“Much like dad, the opportunity presented itself to join into the family business, so I went back to school once again to get my funeral directing license and joined the business in October of 2005,” he said.

Before Don Carter passed away, Staton was able to work with his grandfather, father and sister at the same time.

“Not many families can say that they do that and appreciate it and are able to do that on a daily basis,” he said.

Victor Wallace said he had to reach a different level of maturity before he was ready to become a part of his family’s business, Wallace Realty.

“Going through college, I really didn’t want to go into the family business. I’m not sure I had a higher ambition, I just didn’t think that’s what I wanted to do,” he said.

Wallace stayed in Chapel Hill for two years after graduating from the University of North Carolina at Chapel Hill. While he was running a restaurant in Durham, his father called and offered him a job in property management.

“What he said made some sense. It was a job and he outlined the scope of it and I said, ‘You know, I can see myself doing that,’” he said.

By 1950, the dry goods store had closed and Wallace Realty Co. held its grand opening with Leo Wallace Jr. as president.

Now Victor Wallace, the fourth generation of Wallaces in the business, holds the position as president. His brother, Lee Wallace, is president of Belle Realty Development Co. and son Jason is a sales executive.

The position was not exactly handed to Victor. He started at the bottom, using the experience he gained working maintenance during the summers, and worked his way to the top.

“It wasn’t preordained by any means. I think I had to prove to (my father) at some point that I was mature enough to have a job and be serious,” he said.

Kimberly Kelsey knew she did not want to join Noble and Kelsey Funeral Home, her family’s business.

“I fought it for as long as I could,” she said.

Kimberly’s grandmother, Lula Spaulding Kelsey, was also involved with the business. She became the first female embalmer in the state.

Kimberly’s father, A.R. Kelsey, took over the business after William and Lula passed away. After A.R. died in 1994, Kimberly became the third generation of Kelseys to own the funeral home.

Her father wanted Kimberly and her brother to manage the funeral home together, but her brother did not want to get involved. So when her father started to get sick, Kimberly decided to move back to Salisbury from Virginia in 1992 and go back to school to keep the business going.

Kimberly Kelsey said she and her brother spent a lot of time at the funeral home when they were kids, but it caused her to develop negative feelings towards the business.

“The reason I didn’t want to do it is because I was here practically every day when I was growing up,” she said. “And I always promised myself that when and if I did have children I wouldn’t do them the same way.”

Kimberly said she felt pressure from her father to join the business. He even asked her to drop out of school and work for the business while she was attending Winston-Salem State University.

But once her father got sick, she realized that she did not want the business to die with him.

It took her a while to get used to the position, but Kimberly said she doesn’t regret taking the job.

“I really like my job because I enjoy meeting people and being able to help,” she said.

No pressure for Beaver

John Beaver said if he felt pushed, he would not have wanted to join because it wouldn’t have been his choice. Luckily, neither his father nor his uncle ever pushed him to work for them.

“I feel no pressure at all,” John said. “The only pressure I feel is from myself, that I feel like I want to make everybody happy.”

John said his father did ask him what his plans were for the future so that he could start thinking about succession plans. But even that conversation did not feel pushy.

“It was always, ‘Find your own way, do whatever you want. It’s here if you would like it,’” he said.

“I purposefully said that there was no pressure whatsoever because in a small business you have to definitely want to do it because it will kill you otherwise. It will either kill the business or kill the person,” he said.

Trip Beaver agreed. His own children decided to take different career paths, but he said he was OK with that.

Neither William nor Staton Carter felt any pressure from family to take over the business. A lot of the interest in the business was fostered when Staton and Kristen spent time at the funeral home as kids.

“When dad was up here working, we would come up to visit with him or pick him up for dinner and drop him back off for nighttime visitation. That was just kind of a usual thing for us to do as kids,” Staton said.

Mike Beaver said it would be sad if he and his brother were the last of the Beaver family to run the business, but keeping the business in the family is not vital for him. The only thing that really matters is having a passion for the business.

“That passion doesn’t really have to be family-oriented. It’s kind of interesting when it is, from a pride standpoint,” he said.

Summie Carter said he is working on succession planning.

“My plan is to pass it onto my children. There’s no reason to look at it any other way unless they make the decision that this is not what they want to do,” he said.

Victor Wallace’s son Jason has been working at Wallace Realty for six years and his niece Lane seems like she is gaining interest, but Victor said he isn’t “obsessed” about the business staying in the family.

“I think some form of this (business) will always be here…,” he said.

Kimberly Kelsey said her daughter Adrianna Kelsey wants to become an anesthesiologist, but she still wants to stay involved with the business. Kimberly also has a nephew, Christopher Robbins, who wants to become a licensed funeral director and embalmer and now works at the funeral home part-time.

She said keeping the business in the family is a way of honoring the work of the family members who came before her.

“My grandparents and my parents worked so hard to leave something and have a legacy for our family. I feel like it was so important for them, first of all, to start their own business and for it to continue to be so successful,” she said.

John Beaver knows that because of his family’s work, the Beaver name is now associated with quality, and he wants to be able to continue that tradition.

“I hope I can make as big of a name as my family has,” he said. “Hopefully expand that name.”