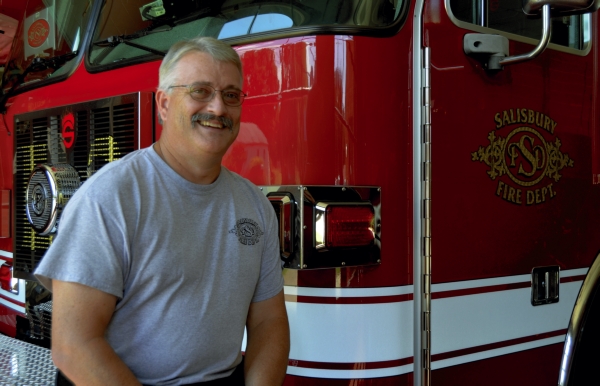 SALISBURY  — The choice to go into fire service was a simple one for longtime firefighter Bobby Fox.

He had just graduated from East Rowan High school and two weeks later thought it would be something that he could handle.

Fox had grown up on a farm, riding in rodeos and breaking horses, and he ran cross country at school. At first he thought he’d join the U.S. Coast Guard, but then he had a conversation with friend Scott Lineberger.

Lineberger, a firefighter with the Kannapolis Fire Department, told him the job involved a hard entry process. Always up for a challenge, Fox knew he could pass the required agility test and believed firefighting was possible for him.

He began with the Salisbury Fire Department Aug. 25, 1986. He’s currently the chief at Miller’s Ferry Fire Department, where he will remain. He has also been a volunteer with Spencer and Granite Quarry fire departments.

Throughout the 30 years, Fox has served on just about every committee in the fire service including the apparatus committee and the training with volunteer fire department committee. He’s also the founder of the Rowan County Honor Guard.

“Thirty years is a long time in the fire service. It takes a lot out of you,” Fox said.

He said he loves his job and the city, but it’s time to see what the future holds.

As to what he’ll do post-retirement, Fox said he will continue to be chief at Miller’s Ferry and spend some time riding his motorcycle. He’ll also take care of the horses on his farm.

The thing he’ll miss the most is the firefighters — the brotherhood.

He said Fox was a good community servant.

“Half of my career I’ve spent with Bobby fighting fires,” said Battalion Chief David Morris. He said a lot of the techniques he learned were from Fox.

Morris joked later that he wanted to be promoted to get away from Fox. The two reminisced about things that happened at the station when they worked alongside each other.

“It’s a blessing anytime someone can retire from this profession,” Morris said.

Josh Martin has been with the fire department for four years and said Fox was his captain for the first year.

“I was green to the fire service. Everything I’ve learned over the years, he taught me,” Martin said.

He said Fox called to check on firefighters outside of work to make sure they were OK.

Eric Bost has been with the fire department for 10 years. Fox helped develop him as a driver. Bost said Fox encouraged him to apply for a higher position.

“How he treated me is how I treat my guys,” Bost said. “He’s good at instilling in others all the stuff that he knew.”

Ronald Alston said no matter how stressful work could get, Fox made it enjoyable to come to work. Alston has been with the fire department for 15 years.

“If you can make 30 years, then you’ve done well,” said retired Fire Chief Rick Fesperman. He was part of the group who hired Fox and said, “we made a good choice in Bobby Fox.”

The men attended a recent retirement reception for Fox at the East Innes Street fire station. Fox was surrounded by his family, including son Josh, a captain at Miller’s Ferry; his daughter and parents. He was also able to talk to some retired firefighters and officers he’s not talked to in some time.

Those gathered shared funny stories about their time serving alongside Fox and paused to take pictures with him.