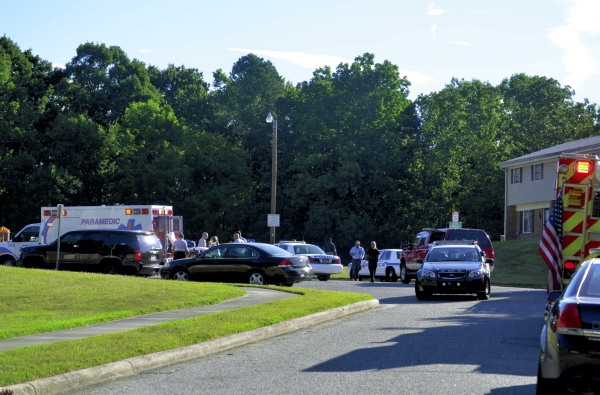 Salisbury Police investigate a shooting at Zion Hills Apartment complex, located on Standish Street. Officers responded to a shots fired call Friday morning and found a male dead behind one of the units. Shavonne Walker/Salisbury Post

Reggie Jasmond Burke, 30, of Salisbury, was found dead when officers responded to a call of shots fired in the area.

Police Chief Jerry Stokes said while at the scene that the shooting happened at the complex. The call came in before 8:30 a.m. Burke was found between the complex’s playground and a wooded area.

It’s not clear if Burke cut through the wooded area, which neighbors said is a path that lots of people use. The path leads to another apartment complex on Linn Lane, off Old Wilkesboro Road.

Neighbors say Burke would have had to get past lots of trees and a creek before emerging on the other side.

One neighbor, Ambria Hawkins, said she was shocked to learn someone was killed at her apartment complex. She said there could have been children at the playground, any of whom could have been shot as well.

Slowly, small crowds began to gather as more and more police arrived on the scene. Investigators went door-to-door asking residents for any information. Some residents said they didn’t hear anything.

One man who lives at Brenner Crossing, located across the street from of Zion Hills, said he heard a gunshot and stopped at the complex before work just to see what was happening.

Former South Rowan High Principal Dr. Ron Turbyfill said he was saddened to hear about the murder of Burke, who was one of his students at North Rowan Elementary when Turbyfill was an assistant principal.

“Every time I hear of a shooting, I think of them. I hold my breath thinking, “is he one of mine?’ ” he said.

“Reggie was ‘one of mine.’  I don’t remember Reggie as being a ‘bad kid’,” Turbyfill said.

He said Burke was a man who “lost his life far too soon.”

No arrest has been made and police have not identified a suspect.

Anyone with information regarding this matter is encouraged to call the Salisbury Police Department at 704-638-5333 or Crime stoppers at 1-866-639-5245 or http://tips.salisburyrowancrimestoppers.org/

All calls can be made anonymously.