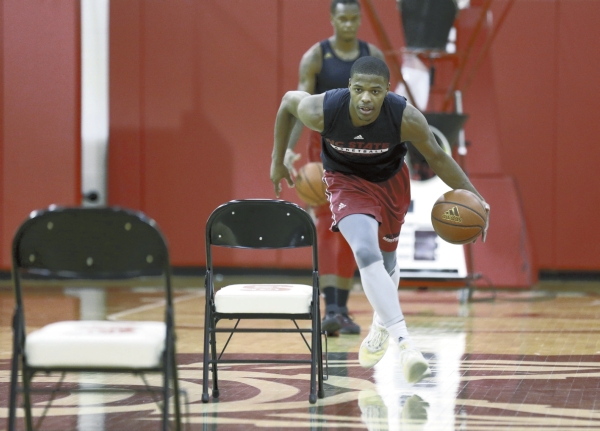 In this photo taken Tuesday, July 26, 2016 North Carolina State freshman Dennis Smith Jr. participates in an NCAA basketball drill on campus in Raleigh, N.C. Smith suffered a serious knee injury in August 2015 and enrolled at N.C. State in January as he focused on rehabbing and learning the Wolfpack's offense. (AP Photo/Gerry Broome)

North Carolina State’s prized freshman point guard is pushing through a workout in the practice gym on a hot July afternoon, and there’s no sign of the knee injury that defined his past year.

He’s sprinting along the baseline to bury a catch-and-shoot corner 3-pointer. He’s dribbling between chairs and stutter-stepping his way to a pull-up jumper. He’s launching himself at the rim for a dunk off the dribble.

“I don’t expect to be rusty at all,” Smith said in an interview with The Associated Press. “I was feeling kind of nervous at one point, but I went in and did a workout and then I was thinking, ‘I’m putting in all this work so all the nervousness should be out of my mind.’ I had no reason to be timid.

“I just have to go out there and perform, no excuses.”

A lot has happened for Smith in 12 months. The Fayetteville native suffered a torn left anterior cruciate ligament in a game during the Adidas Nations event featuring top prospects. He had surgery, picked N.C. State, graduated from high school early and enrolled in college in January to rehab and learn the Wolfpack’s system before his debut later this year.

Tuesday marks one year since the injury for the 6-foot-3 Smith, ranked by ESPN as the nation’s No. 1 point guard when he signed last fall.

“We’ve tried to be real conservative with him as far as not letting him do too much too fast,” coach Mark Gottfried said. “At his age, he can’t wait. He’s dying to play every day.”

Smith started earning his leadership role as soon as he arrived in Raleigh, pointing out instructions to teammates or calling them to the gym for extra work even though he couldn’t play. He figures that time observing from the sideline has prepared him to replace high-scoring floor leader Anthony “Cat” Barber.

The physical work to get back has been tougher.

Roughly a year ago, Smith was lying in a bed after surgery trying to stay positive. He asked trainer Ja-Rell Bailey to bring him some free weights for upper-body exercises even if he couldn’t do much else, an example of why Bailey described Smith as “a man determined.”

Smith’s father said the rehab emphasized building leg strength to protect and stabilize the injured knee, something his son said he will keep doing in both legs for years to come. Smith’s work has helped him go from 180 pounds to a college-ready 192-pound frame.

“He’s got his bounce back, so he can dunk and everything,” Dennis Smith Sr. said. “But what Junior has got, God gave it to him. . A lot of times you run into kids who are built off of hype because they do a fancy move or have a good game. Junior ain’t hype. He’s the real deal.”

Regardless, Gottfried expects Smith to have “a learning curve.”

The Wolfpack will look much different, too, after missing the NCAA Tournament for the first time in five seasons. N.C. State welcomes Scout.com’s No. 6-ranked recruiting class that includes five-star Turkish big man Omer Yurtseven. Senior guard Terry Henderson returns from an ankle injury that sidelined him 7 minutes into last season. Charlotte transfer and former Conference USA freshman of the year Torin Dorn Jr. will play after sitting out last year.

Still, Smith is the guy stirring the most buzz for Wolfpack fans — something he has no trouble embracing.

“I really don’t feel that pressure though,” Smith said. “I feel like if you come in and you expect to play well, then you should have those expectations of people talking. It’s just playing basketball to me. I’ve been doing it my whole life.”