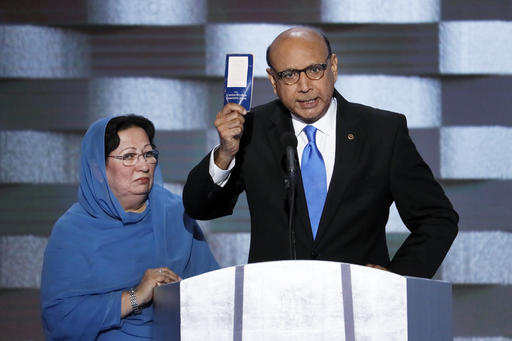 Khizr Khan, father of fallen US Army Capt. Humayun S. M. Khan holds up a copy of the Constitution of the United States as his wife listens during the final day of the 2016 Democratic National Convention in Philadelphia. AP photo

Leonard Pitts: Democrats remind us of us

On the convention floor Delegates hold up Hillary signs at the convention.

In the end, it wasn’t even close.

After a GOP gathering in Cleveland that had all the incandescent joy of a biblical plague, the Democratic Convention in Philadelphia was as bracing as snow down your back on the most scalding day in August. In terms of star power (Meryl Streep versus Chachi from “Happy Days”) production value and substance, there was no contest. One was a sixth-grade talent show, the other a matinee of “Hamilton.”

If you doubt the difference could have been that stark, perhaps you’ll take the word of disaffected Republicans like former Jeb Bush strategist Tim Miller, who asked on Twitter “why an 18-year-old watching the conventions would want to be a Republican?” Or conservative blogger Erick Erickson, who tweeted: “I’m so angry at my own party right now.”

Their pessimism was understandable in the wake of powerful, conscience-calling speeches by the president, the vice president, the first lady and the Rev. William Barber II, an organizer of the Moral Mondays movement in North Carolina. Even Hillary Clinton, whose oratorical skills are not formidable, rose to the occasion. The history-making first woman to win a major party presidential nomination issued a stinging rebuke of her thin-skinned opponent, Donald Trump.

“A man you can bait with a tweet,” she observed acidly, “is not a man we can trust with nuclear weapons.”

For all that, though, the emotional center of the convention might have been someone who wasn’t much of an orator at all, whose first language isn’t even English. With his wife at his side, Khizr Khan, a Pakistan-born immigrant, addressed the crowd. “Tonight,” he said, “we are honored to stand here as parents of Capt. Humayun Khan and as patriotic American Muslims with undivided loyalty to our country.”

Humayun, a soldier, was killed in Iraq in 2004, running toward a suicide bomber to save his men. Yet, as his father noted, if it were up to Trump, he of the hateful rhetoric, the Mexican wall and the Muslim ban, Humayun would never even have been in this country.

“Donald Trump,” said Khan, engaging the bully directly, “you are asking Americans to trust you with their future. Let me ask you: have you even read the United States Constitution?” In the thunderous ovation that followed, he produced a booklet from his pocket and held it up, saying, “I will gladly lend you my copy. In this document, look for the words liberty and equal protection of law.

“Have you ever been to Arlington Cemetery?” demanded the grieving father. “Go look at the graves of brave patriots who died defending United States of America. You will see all faiths, genders and ethnicities. You have sacrificed nothing, and no one!” he cried, voice rising with barely suppressed outrage. “We cannot solve our problems by building walls, sowing division.”

And one is reminded that no one believes in America’s promises — liberty and justice for all — quite as fiercely as the immigrant does. Trump’s thesis is that we can no longer afford to strive for those promises in a world he says is more threatening and scary than ever before.

The Democrats’ response was to remind us of us. “America is great,” quoted Clinton, “because America is good.”

November, then, is not just an election, but a moment of truth. We are called to decide whether to affirm our nation’s promises, and thus validate the faith and sacrifice of families like the Khans, or whether to burn it all to ash in the fire of our own anger and fear.

And that’s something else that shouldn’t even be close.

Leonard Pitts is a columnist for The Miami Herald. Readers may contact him via e-mail at lpitts@miamiherald.com.

Darts & laurels: Rustin liked to give folks a chance