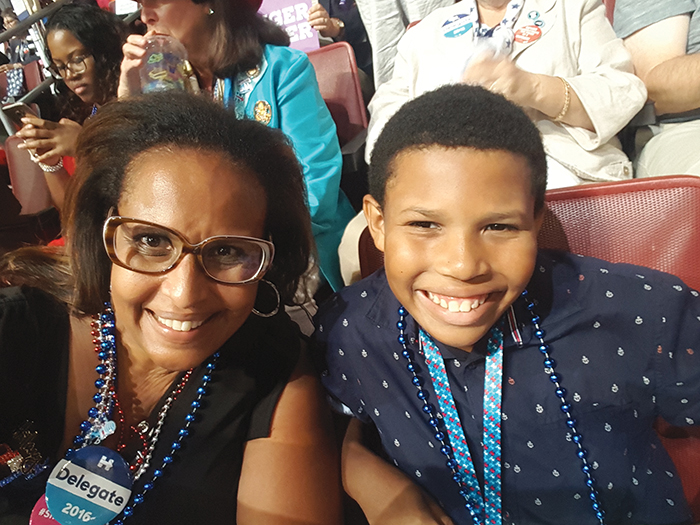 SALISBURY — The Democratic Party emerged from their 2016 convention as a reflection of American society, according to delegate and Kannapolis resident Veleria Levy.

Levy, the state party’s second vice chair, attended the convention with her son Joseph. She was a “delegate whip,” responsible for a group of 10 or so other North Carolina delegates. Her son tagged along for the experience.

“I’m more excited about the unity of our party coming out of this convention,” Levy said in an interview with the Salisbury Post. “Everyone watching this convention should be able to see America in our convention. You see your neighbor. You see the gentleman down the street who may own a business. You see your friends.”

Levy also attended the 2012 Democratic Party Convention in Charlotte as a delegate, but said this year’s event topped 2012.

“It was all just really unbelievable,” she said about this year’s convention.

As a delegate, Levy had a hand in nominating presidential candidate Hillary Clinton. She was interviewed by national and international news outlets. Her son appeared in a video produced by and shown at the Democratic National Convention. Levy also listened to a parade of speakers and attended various panels.

She said her favorite speech was one delivered by Rev. William Barber, the N.C. NAACP president. In part, Barber said some issues are not “liberal versus conservative, they are right versus wrong.”

“The reason I’m picking his speech as my favorite is because you hear from the right so much about conservative Christianity, where you’re really blurring the lines of politics when you draw church and state together,” Levy said. “When you think about Christian beliefs and what those beliefs are, it’s very difficult to look at the Republican Party and their platform and then marry that with Christian beliefs. When we talk about helping the least of us in Christianity, those are not the things that the Republican Party stands for.”

When asked about Clinton’s speech on Thursday evening, Levy focused on two, specific parts of the presidential candidates address. Citing Clinton’s statement “when there’s no ceilings, the sky is the limit,” Levy said Clinton reiterated the importance of the fact that Clinton is the first female presidential nominee of a major political party.

Levy also mentioned a statement by Clinton about the importance of science.

“I believe that climate change is real and that we can save our planet while creating millions of good-paying clean energy jobs,” Clinton said on Thursday.

Levy noted that in Rowan County dozens of people are dealing with environmental issues stemming from potential coal ash contamination.

With the end of the Democratic Party’s convention, the general election begins. Levy said one important goal will be to get people of all political persuasions to read party platforms and be open to listening.

“You many not be a Democrat but, if you believe in these core principles that we believe in, then you should vote Democratic,” she said.