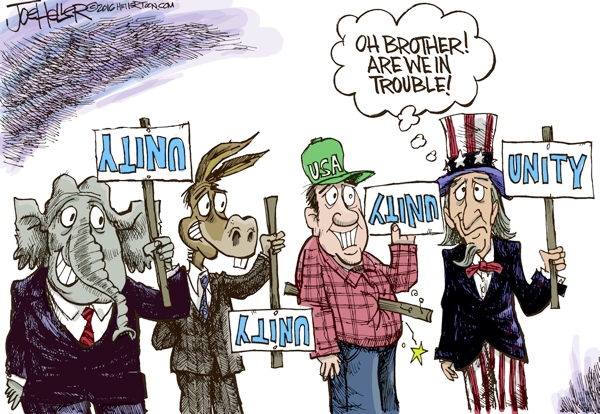 Hillary Clinton will be the most qualified president this country has seen in a long time. She has proven that no matter what negative people throw at you, you can endure.

She has proven her ability to get things done, and is respected by people all over the world. I am so proud of her, and proud as a woman to see her make history.

I hope they can look at some other successful cities and towns to see that things like a parking deck and accessibility would improve downtown greatly. Businesses need high volumes of shoppers, restaurants need high volumes of customers, etc. You need something that allows people to get out of their cars, and then give them something to get out of their cars for. What are we waiting for?

You need to include plans for the youth to reduce the gang involvement and crime rate. There is no programming for children. There is nothing for the children and youth today. They are the future of Salisbury. Fix the community’s level of concern for them; give them a reason to want to do better in school.

The statistics are distressing, but there is much opportunity for leadership to turn things around here. Hard facts. But the truth shall make you free.

I’m sure there are myriad reasons some conditions in Salisbury have gone on a downward spiral. It is my hope that the work by local groups and government entities will continue to find ways to improve the economic future of Salisbury as well as the rest of the county.

Even with these negative findings, I am still optimistic that this area will achieve some growth due to its position between the Triad and Charlotte with the widening of lanes along I-85.

I did not grow up in Rowan County, but I really enjoy living here.

There are specific impediments to development and growth that can/must be removed. For a start, Downtown Salisbury and (RowanWorks) should be defunded, and governmental units should take over their jobs. These quasi-governmental organs have failed. The money … could be better spent on hiring a respected, world-class industrial recruitment firm.

Kudos to the city of Salisbury for deploying a local artist for this wonderful project. How wonderful to see the Main Street evolving into such a pleasant place to be. Thank you, Salisbury and Josh Canup.

… Controversial Dollar General proposal gets OK from planning board

It would be nice if the editors of this paper checked out the rumors letter writers are trying to spread before printing said letters. Ms. Wasserman-Schultz was given an honorary position to get her to quit. She has no role and no pay.

… Trump takes aim at Clinton, Democrats in speech to veterans

Individuals can follow their own ideological direction, but a partisan vets group breaks the oaths we all took. … VFW still can’t figure out why so many vets of Vietnam on never joined them.

Make America Great Again? What “again” are they talking about?

When he left for work, John McCain climbed into an A-6 fighter-bomber and went from zero to 200 knots on his way to attack the biggest air defense system in the world. Donald Trump got into an elevator and pushed the down button.

John McCain’s job was defending America’s interests, whether he agreed with them or not. Trump’s job was putting together schemes to make much money for himself. See Trump University, golf courses or whatever made money.

John McCain spent five years at the Hanoi Hilton when he could have gotten out by making a few speeches. Donald Trump spent the same five years in his three-story luxury suite doing who knows what.

Who’s the hero serving America, and who’s the loser, serving himself?

Wonderful news for our community. Food Lion is a huge part of Rowan County and so happy to read that they plan to remain here in their headquarters.

Mr. Koontz, a false equivalency was made when you stated that marching behind the Pan African flag was just as bad as white supremacists parading behind the Confederate battle flag.

One is a symbol resurrected at the dawn of the civil rights era as a banner of bigotry and segregation. The other was created in the 1920s as a symbol of pride and identity of a people stripped of their African heritage. It is not a battle flag and is not meant to replace the stars and stripes.

Old Glory stands for a nation of laws.

The red, black and green standard signifies the unity and the desired wellbeing of the black African diaspora.

… Wade Rouzer: God in the riptide

We are all glad you both came out of this scary adventure safe and sound.

We would never make it if God didn’t send angels in many forms to protect us.

Oh, Wade, so glad you two are safe and sound. I really enjoyed this article. Best wishes for your granddaughter in her college career. Stay safe. God bless!

Nice story, Wade. We are a family of paddlers(mostly rivers and inland waterway) so I can relate. Thanks for sharing.

Great story. You have inspired me. I lost my son a few years ago . I often wonder how old he would be now. I know that I will know him when I see him. Thank you so much. Keep your faith. God is still on His throne. He’s coming back soon to take us all home to be with Him. What a day that will be.

See what God can do! This is an amazing testimony to His healing power. You go, Chase

Wow! Thank you so much for sharing your story. What am inspiration you are, Chase. Continuing to pray for you.

I was relatively new to law enforcement when I was called to respond with my bloodhound, Droopy, to track down a dangerous felon. I did and when I arrived he declined the assistance of the other officers saying that he did not want to “excite” the one that we were looking for.

We picked up the trail and after a short chase we were able to apprehend him. He surrendered his weapon saying that he would never hurt his friend, John L. This could have had a much different outcome if the respect was not there.

One memorable thing about this was the arrestee said that he had not eaten in two days. John L. treated both of us to Waffle House before we took the man to jail. What a friend to all and a true example of what made him a wonderful friend and respected police chief.

John L. was a good man. He truly cared about people and had many funny stories to tell. He made my time with East Spencer Police Department enjoyable.

To the family, my sincere condolences. I know he will be missed by many.

Mr. Rustin was a real leader of the East Spencer community. He spent his time trying to make this town a neighborhood for family and a place to live.

This is the second leader we have lost this year. Mrs. Essie Foxx has left the town and now Mr. Rustin has left some big shoes to fill.

Thanks to you both for dedicating your lives to the town and its citizens.

I remember when my brother Phillip Miller would say to me, “I talked to Mr. John L. today and we sat and talked for a long time.”

Mr. Rustin is remembered for having a special tree in East Spencer where the kids could come and talk to him about anything. I am sure he helped my brother many times.

May he rest in peace.

Champ! You have your wings now.

I remember John L. from many years ago when I first wanted to get into law enforcement and he gave me the chance. I also served on the town board when he was mayor. He was a good man who looked for the best in people. He will be missed and my prayers are with the family.

I also just thought of a funny story we (myself and James Milton and many others) remember about John L. When he talked to someone, he would always refer to them as”Jimmy” if he could not remember their name at the moment. We all resigned ourselves to the fact that our name was Jimmy.

He was an incredibly good man.