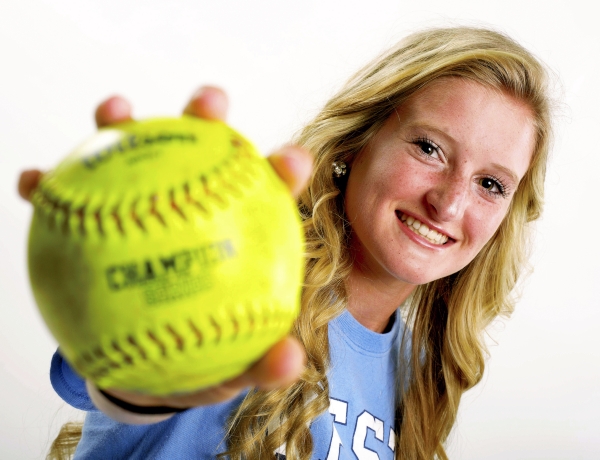 JON C. LAKEY / SALISBURY POST West Rowan High School standout athletes Taylor Martin and J.T. Sanders are the Salisbury Post’s Athletes of the Year for the school year 2015-16. Martin was voted All-Rowan County and All-South Piedmont Conference in three sports — volleyball, basketball and softball. Sanders was a state champion and record setter in indoor track and earned all-county honors in track and football. Martin plans to play softball at Catawba while Sanders has decided to play football at Winston-Salem State.

SALISBURY — Taylor Martin played baseball with the boys in the China Grove youth leagues, but when she turned 11, her parents, Clai and Rhonda, broke the news to her that it was time to switch from baseball to fast-pitch softball.
“I remember crying my eyes out,” Martin said. “Because it was a lot of fun striking the boys out. They didn’t like getting struck out by a girl, especially the short girl.”
Martin never stopped being the short girl — she graduated from West Rowan High as a 5-footer — but the fun didn’t stop either. She was an annual member of the All-South Piedmont Conference and All-Rowan County teams in softball and basketball.
Then she had a breakout senior year on the volleyball court where her sensational digging and passing made it three sports in which she was all-county and all-conference.
“What a spectacular kid and athlete,” West Rowan basketball coach Ashley Poole said. “Taylor is every coach’s dream. Five feet of pure energy who is ready and willing to sacrifice anything for her team. She is relentless, she works hard — even through what she considers to be a pointless drill — and she lays it all on the line every night.”
Becoming an all-county force in a third sport put Martin over the top as the recipient of the Tracy Connor Award that goes to the Rowan County Female Athlete of the Year.
There was stiff competition, including East Rowan graduate Brittany Small, who placed second in the high jump in the state indoor and outdoor track meets and was all-conference and all-county in volleyball. Small also helped the Mustangs immensely on the boards when she made a basketball comeback as a senior. North Rowan graduate Aliyah Farmer, a springy, two-sport athlete who was one of the county’s best in basketball and volleyball, was next in the voting by the Post sports staff.
“It’s an awesome feeling, a great honor to be recognized like this,” Martin said. “The only thing I’d do different would be to start playing volleyball sooner. I only played volleyball the last three years because I thought you had to be tall, but once I started playing, I loved it.”
West volleyball coach Jan Dowling watched Martin lead the South Piedmont Conference with 512 digs and also saw her blossom into a team leader as a senior.
“She wasn’t vocal at the start, but by the end of the season I was calling a timeout and I’d say, ‘Taylor, you take it.'” Dowling said. “She’d let her teammates know they were getting good passes and they needed to be putting the ball down. She’s got a real talent for volleyball. She can read exactly where the ball is going or needs to go, and I’ve never coached anyone who worked harder.”
While Martin is headed to Catawba as a scholarship player in softball, she also plans to be a volleyball walk-on. When both sports have workouts, practices or games at the same time, Martin will be on the softball diamond, but there will be some days when she can compete in both.
“I know it’s going to be hard to play two sports in college,” Martin said. “But I also know I want to try it.”
Martin played on conference championship teams in softball (2014-15) and basketball (2016).
She was a second baseman for the softball squad most of her career but she made a transition to center field as a senior and didn’t make an error all season. She produced 110 hits in her career and was the catalyst for the Falcons’ offense. As a senior, she led the team with 19 stole bases and 25 runs scored.
“If Taylor weighed 100 pounds, 99 was heart,” West softball coach Jimmy Greene said. “She grew up with my daughter (Peyton Greene), and I knew Taylor would be something special when she got to West. She’s got fire, she’s got grit, she’s got unbelievable athletic instincts. She naturally does things you can’t teach kids to do.”
Greene was coaching third base in a game this year when Martin suddenly came sliding into the bag. He hadn’t given a sign, but the ball had eluded the pitcher for an instant and Martin had reacted immediately.
“Everybody is yelling, ‘Way to go. Nice call.'” Greene said with a laugh. “I didn’t mind taking credit for it.”
Greene’s only concerns about Martin, who averaged 12.4 points per game as a senior, came when she was on the basketball floor. She poured in 922 points in three varsity seasons and is one of 15 girls in West history to top 900. She did it with a mix of 3-point bombs and layups that she tossed in over the trees she encountered in the lane.
“We needed her in softball, so I held my breath every time she hit the floor for the basketball team,” Greene said. “And she must have hit the floor at least five times a night.”
That will be the lasting image of Martin, hair flying and body crashing onto the gym floor at West Rowan, determined to get one more loose ball or one more dig, no matter what the score.
“You can’t do more than 100 percent, seven days a week, and that’s what she gave us,” Dowling said.