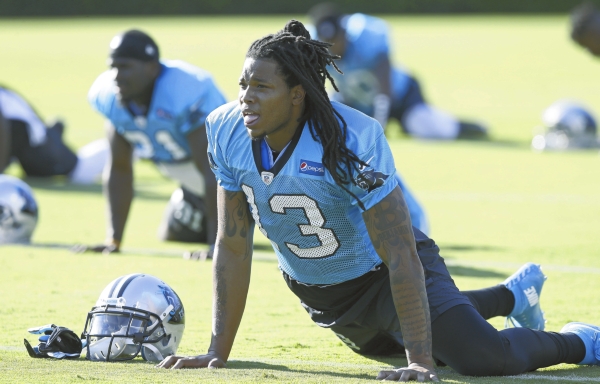 In his first practice since tearing the ACL in his left knee last August, Benjamin made four tough catches, reminding the more than 22,445 fans at Gibbs Stadium of just how valuable the 6-foot-5, 245-pound wide receiver is to the Panthers offense.

“I don’t want to say he was in top form, but he was in pretty doggone good form,” Rivera said.

Benjamin had 73 receptions for 1,008 yards and nine touchdowns as a rookie in 2014, but tore his ACL last August at training camp and missed the team’s run to the Super Bowl.

Benjamin ran swift, sharp routes and showed no ill effects from last year’s surgery. He leaped in the air to snag two passes and reached behind to grab another.

“I’m just happy for him,” Panthers wide receivers coach Ricky Proehl said. “It’s a confidence builder. You go out and perform like he did, make catches over the middle, make contested catches with somebody draped on him, it was huge. Anytime you get that first catch out of the way, it’s huge, especially coming off an injury.”

Benjamin was not made available for interviews.

The Panthers had the league’s top scoring offense last season and finished 17-2 despite losing Benjamin. The team is excited about adding him to the mix.

“Kelvin’s retention as far what we’re doing, he handled that really well by the way he ran the routes and attacked the football,” Rivera said. “There will be a lot of good things for us to see on tape.”

The 25-year-old Benjamin wasn’t the only wide receiver to have a solid night following a return from an injury.

Stephen Hill, who also tore an ACL in his knee last year in training camp, and Philly Brown, who is coming off shoulder surgery, also made big catches during practice.

Rivera said that starting defensive tackle Star Lotulelei was held out of practice as a precautionary measure after his hamstring tightened up in conditioning tests on Wednesday.

BELL APOLOGIZES FOR BEING A DISTRACTION AS STEELERS BEGIN

The wait will be considerably longer for the Pittsburgh Steelers running back, perhaps all the way until October if his appeal for violating the NFL’s substance abuse policy is denied.

While Bell apologized for being a distraction as the Steelers reported for training camp Thursday, he declined to get into specifics, saying only he was notified in March that he’d been suspended. ESPN.com reported Bell missed a drug test.

“It’s a little frustrating,” Bell said. “I’ve got to handle it for what it is and just keep moving forward.”

Bell expects the appeal to be heard sometime in August, giving the Steelers plenty of time to prepare should he be unavailable for the season opener on Sept. 12 against Washington.

This is the second time Bell has faced discipline from the league. He sat out the first two games of the 2015 season as punishment for his arrest in August 2014 on DUI and marijuana possession charges following a traffic stop. Bell was originally suspended three games before it was reduced on appeal.

ECU wants all to know it hopes to join…