‘Hands on a Hardbody’ — how to come out winning 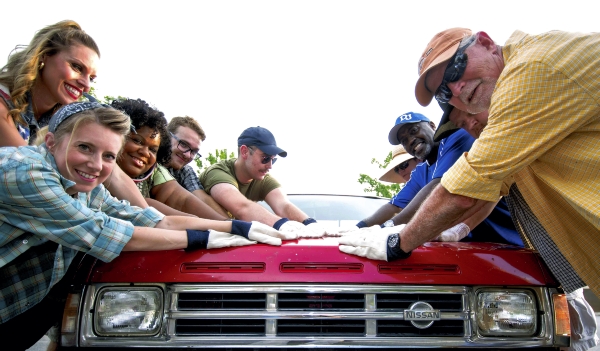 JON C. LAKEY / SALISBURY POST Piedmont Players Theatre production of the musical 'Hands on a Hardbody.' For 10 hard-luck Texans, a new lease on life is so close they can touch it. They will fight to keep at least one hand on a brand-new truck in order to win it.

“Hands on a Hardbody” is not what you may think. The Piedmont Players’ production of the musical is all about winning a truck by keeping a hand on it for however long it takes.

There’s the sort of shady dude who won a truck before. He figures he’s got it made, until some of his secrets start to come out. Dennis Welch plays the slightly despicable Benny Perkin, with a big hat and dark glasses — looks like he doesn’t want anyone to see too much of him, inside or out.

Welch was fine, although sometimes hard to understand. He needs to speak up and sing out his plans, plots and failings.

Barry Dyson is the low-key JD Drew, a man who fell off an oil rig and lost his job. His wife is there to support him, but he doesn’t want help. He just wants to be left alone. Robin Rogers was a surprise as Virginia Drew, with her strong, sweet voice, begging her husband to be “Alone with Me.”

Carrie Foster is pretty and perky in an annoying way as the cute girl in boots, Heather Stovall. She, too, has a sweet voice and conveys the jittery energy of the girl who makes a deal.

It’s good to see Walter “Snooky” James on stage again. His role of Ronald McCowan calls on him to be charming, a bit of a ladies man, and honest. He has a great song, “My Problem Right There,” and joins in near the end with a reprise of a song that Alexis Greer kills, “Joy of the Lord.”

Greer is Norma, a firm believer in the Lord, who has more than 3,000 people praying for her to win the truck so she can take her kids to school. It’s always a pleasure to see Greer, and even better when she sings. The “Joy of the Lord” song was the best, most enjoyable song of the night.

A strong runner-up is “Stronger,” in which Marine veteran Chris Alvaro, played with great heart by Anthony Cataldo, laments what he saw over there, and how hard normal life is now. It’s a tear-jerker and Cataldo makes the volatile Marine supremely human.

At the tailgate, you’ll find Greg Wilhote, played by Rusty Fisher, and Kelli Mangrum, played by Heather Love. Fisher and Love form a nice bond as two young people just trying to find their way in the world. They have another good song, “I’m Gone,” with Love’s notable vocals. They get a chance to prove that love is more important than winning, a good message.

Greer is the redneck Janis Curtis, a lady who speaks her mind and has a lot to say about how the others are behaving, Paired with Don, her husband, played by Christopher Barcroft, they get the funny song, “If She Don’t Sleep,” about sticking together and making it through.

Abraham Ayala plays Jesus Pena, who has to deal with the nasty prejudice of others, particularly the snotty finance officer, Cindy Barnes, played with appropriate shrillness by Amy Huffman. The dealership’s slimy owner is played by Josh Wainwright, who amps up the man’s worst side.

Ayala has a song, “Born in Laredo” that reminds everyone not to jump to conclusions.

Eric Slipp in the long-haired radio personality Frank Nugent, who sticks around to report on the contest.

What it all comes down to is learning about the personalities of the people holding on to that truck. We learn why they’re there and what their dreams are. You end up pulling for one or more of them, and hoping at least one drops off before the end.

Director Reid Leonard also choreographed the show and designed the set and lights. Figuring how to make a pickup spin around onstage must have been fun, but it works well.

Adrian Smith is the music director and plays multiple instruments. The orchestra is backstage, so we don’t get a glimpse of them. For a few of the actors, the music overwhelmed their voices at times. The songs tell the story, as well as the dialogue.

The play is told in two acts, with a 20-minute intermission, coming in at about two hours. It’s suitable for older children. Young ones may not be all that interested in who these people are.