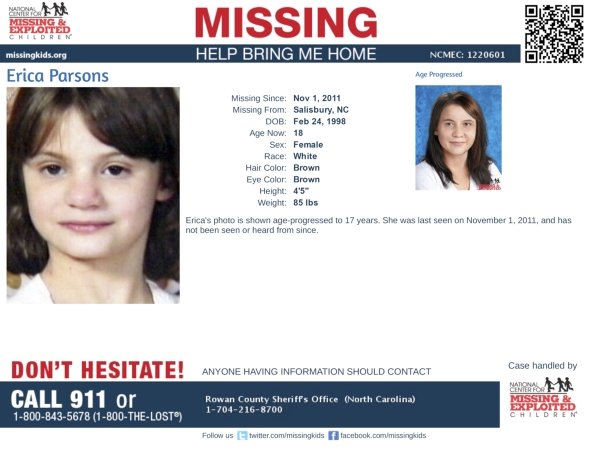 “We’ve faced many obstacles, but we will not stop looking for this little girl,” said Rowan County Sheriff Kevin Auten. “She deserves to be found, she deserves for someone to come forward and help us find her.”

Investigators are still actively following leads, according to a press release from Auten’s office.

The Sheriff’s Office and the FBI are offering a combined reward of up to $35,000 for information that leads directly to Erica, reported missing on July 30, 2013.

A relative — Erica’s adopted parents’ son — told investigators then that he had not seen Erica since November 2011 when she was 13 years old.

Adoptive parents Sandy and Casey Parsons said the girl went to stay with relatives in the Asheville area and they had not seen her since. Sheriff’s investigators determined their story was not true.

The Parsonses are serving federal prison sentences for fraud related to Erica’s  disappearance. Sandy Parsons was convicted of 43 fraud charges at federal trial in October 2014, and Casey Parsons pled guilty earlier that same month. Long after Erica was no longer in their household, the Parsonses continued to cash government checks intended for the girl’s care.

The FBI, Rowan County Sheriff’s Office and N.C. State Bureau of Investigations are following leads. The National Center for Missing and Exploited Children is also helping in the campaign to publicize Erica’s disappearance with updated missing posters.

“Erica had not been seen by family members for more than a year and a half before anyone notified law enforcement. For that reason, finding Erica has proven to be a challenge,” Auten said.