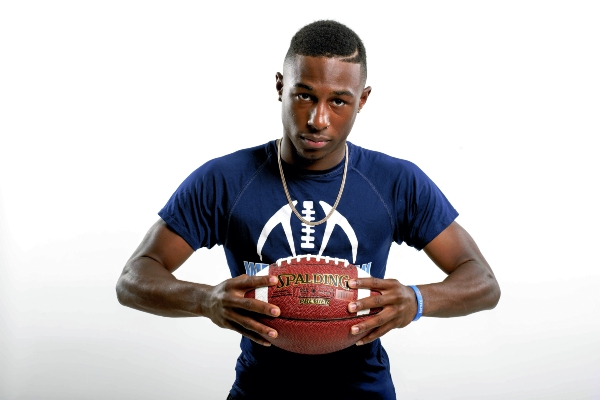 JON C. LAKEY / SALISBURY POST West Rowan High School standout athletes Taylor Martin and J.T. Sanders are the Salisbury Post’s Athletes of the Year for the school year 2015-16. Martin was voted All-Rowan County and All-South Piedmont Conference in three sports — volleyball, basketball and softball. Sanders was a state champion and record setter in indoor track and earned all-county honors in track and football. Martin plans to play softball at Catawba while Sanders has decided to play football at Winston-Salem State.

SALISBURY — West Rowan graduate J.T. Sanders is exciting in football and track, but dancing might be what he does best.
Sanders raised the enthusiasm level at the Falcons’ pep rallies with his flashing feet.
“I’m a pretty chill guy, laid-back,” Sanders said. “But you have to get amped up for football games, and I can dance.”
Sanders’ dancing skills weren’t considered, but his efforts in football, indoor track and outdoor track made him the Darrell Misenheimer Award winner as the top Rowan County male athlete for the 2015-16 school year.
The late Misenheimer, who starred in track, football and wrestling for East Rowan in the mid-1970s, is entering the Salisbury-Rowan Sports Hall of Fame in a few weeks, so it’s an auspicious year to win the award.
There were a host of exceptional, multi-sport athletes for the Post to consider, including four three-sport stars from Carson — graduates Zachary Marchinko and Ryan Bearden, rising senior Brenden Westbrook and rising junior Owen White.
Also high on the list were Sanders’ classmates Kacey Otto, Juwan Houston and Lee Poteat, East Rowan four-sport athlete Chance Brown, Salisbury’s D.J. Alexander and North Rowan’s Jake Pritchard.
“This award means a lot and it makes me feel like all the hard work paid off,” Sanders said. “It’s a surprise. I wasn’t expecting it.”
Sanders had a lot going for him, including competing for the county’s strongest track team and stoutest football squad.
An all-county cornerback and a dashing kick returner in football, Sanders was a two-event state champion in indoor track, taking the 300 and the 500. In the 500, he turned in a record 3A clocking — 1:05.84. He led West to a state runner-up finish.
In the outdoor track season, Sanders was dominant in the sprints, sweeping the 100, 200 and 400 in the county championships and running on the winning 4×400 team.
In the South Piedmont Conference Championships, Sanders won the 100 and 400 and placed second in the 200.
In the 3A Midwest Regional, he won the 400 in a personal-best 49.08 seconds that was the fastest 400 by a Falcon in 40 years. He took third in the 200 and helped the Falcons to first place in the 4×400 and third in the 4×200.
He capped his outdoor season with a third place in the 400 in the 3A State Championships.
Sanders tried youth baseball first, but he discovered quickly that he liked football better and his speed helped him stand out.
Sanders’ uncle, Ron Bost, a former West DB who finished sixth in the 200 in the 1999 3A State Championships, helped him get started.
“My uncle was very important to my career,” Sanders said.
Salisbury Speedsters AAU coach Tim Dunlap and West track coach Ralph Ellis refined Sanders’ sprinting technique. Sanders also got a boost from West volleyball coach Jan Dowling’s conditioning drills.
“Now those practices with Dowling are serious practices,” Sanders said. “When she finishes, you’re either lying on the track or you’re throwing up. She helped me get to where I am now.”
The next step for Sanders will be football at Winston-Salem State. While he’s small (5-foot-9, 160 pounds), he has a chance to be an impact return man. In high school, he always was the fastest person on the football field, and he’ll still be one of the fastest.
Sanders said his decision to go to Winston-Salem State came recently. He’d been expected to pursue track in college.
“Winston-Salem recruited me during football season, but I told them I’d be going somewhere for track,” Sanders said. “They told me to call them if I changed my mind, and so I did. I just couldn’t give football up. I’ve played it so long, and I love the contact.”
Sanders likes that Winston-Salem is close, and he already knows several Rams, including former A.L. Brown DB Daveon Perry. Statesville’s Travis Ramseur, an incoming freshman QB, is Sanders’ cousin.
Sanders’ football recruiting tape is breath-taking.
Lightning speed is obvious on all three of his dizzying, direction-changing interception returns as a senior.
On a kickoff return for a touchdown against Mooresville, Sanders grabs the ball at the 6, caroms off a tackler at the 20, and then wins a foot race to the end zone. A speedy Concord receiver has a 10-yard lead on him. No problem. Sanders runs him down.
There are also soaring pass breakups and physical hits on running plays. Finally, he scoops up a blocked punt and scores a touchdown against Cox Mill.
“J.T. had a big hand in our success,” West football coach Joe Nixon said. “He made a ton of big plays on the defensive side of the ball, and he was just as important in our kicking game. As a return guy, he’s very dangerous.”
Sanders will report for college football on Aug. 9, but it’s for sprinting that he’ll be remembered at West and he plans to continue to compete in AAU meets.
“J.T. is one of the best we’ve had at West in a long, long time,” Ellis said. “He’s got the God-given ability, but he also worked hard at track. His speed progressed every year. His freshman year, he was kind of a mediocre kid. He improved some as a sophomore, and he was a very decent runner as a junior. But his senior year, he was just exceptional.”
Ellis believes Sanders can make it in college football as a returner, but he won’t be shocked if Sanders becomes a track man at a Division I school down the road.
“He’s a very good football player,” Ellis said. “But in track, he might be phenomenal.”