Carolina Brotherhood cyclists find plenty of inspiration along their route 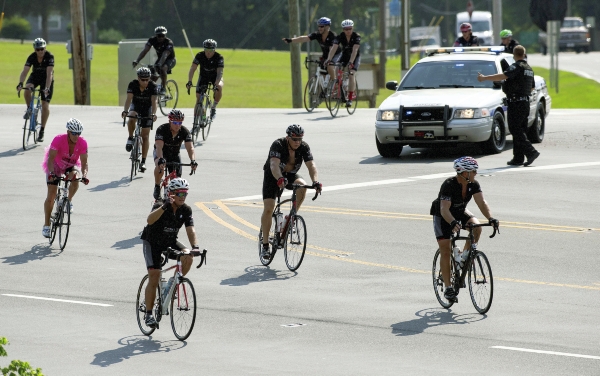 The Carolina Brotherhood Ride makes its way into Rowan County on Wednesday afternoon. The ride is a tribute to fire and police officials that have fallen in the line of duty. The funds raised during the ride will go to assist the family members of those who have died. The ride started in Columbia, S.C. on Sunday and is scheduled to end in Raleigh on Friday. The riders spent the night at the Salisbury Civic Center before departing this morning. Jon C. Lakey/Salisbury Post

SALISBURY —  When it’s close to 100 degrees and you’re riding a bicycle 90 miles from Rock Hill, S.C., to Salisbury, you need things to keep you going.

Salisbury Fire Department Division Chief Jay Baker and his fellow Carolina Brotherhood cyclists found plenty of things to give them extra energy Wednesday — surprises such as riding around the high-banked track at Charlotte Motor Speedway.

So were the warm receptions they received in Pineville and at Charlotte Fire Station No. 18 and Concord Station No. 9.

At the Mooresville Fire Station, they were serenaded by a bagpipes and drum band.

“That really motivated everybody,” Baker  said.

And the cyclists — there looked to be 26 in all Wednesday — couldn’t help but swell up with pride and pedal a little faster when they saw the U.S. flag flying in their trip’s honor at the Atwell Fire Station on N.C. 152 or when they received special escorts along their Rowan County route from local fire departments such as Bostian Heights, China Grove and Locke.

The whole purpose of the weeklong ride of 463 miles hits home when the cyclists reach a destination such as the 1944 Firefighters Memorial in Salisbury — the end point for Wednesday’s leg.

On the back of his left calf, Baker had written the date of March 7, 2008, and the initials of J.M. and V.I., standing for Justin Monroe and Vic Isler, the Salisbury firefighters lost in a millworks fire that morning.

Before the cyclists rode off to their overnight quarters at the Salisbury Civic Center and a barbecue feast prepared by Jack and Jeanie Moore, Baker also took a moment to show fellow riders Drew Lazarus of the Charlotte Fire Department and Landon Davis of the Asheville Fire Department the stone inscribed in memoriam to Baker’s father, Bill, a Spencer fireman who died in 2012.

The whole group posed for a photograph at the memorial site and gathered around the flagpole for a prayer, an “Amen” and a 1-2-3 shout ending with “Brotherhood!”

The annual rides try to build awareness, raise money and also provide emotional support for families of law enforcement officers, firefighters and emergency personnel who have lost their lives in the line of duty in the Carolinas.

One thing you can always count on, according to Baker, is that the rides will be plenty hot.

Wednesday marked the first time the Carolina Brotherhood Ride has come to Salisbury and stayed overnight, so Baker, who doubles as fire chief in Spencer, was especially excited for his fellow cyclists to be here.

Baker wasn’t sure how much of the town he and his Brotherhood friends might see Wednesday night.

The Brotherhood’s route in Rowan County Wednesday afternoon followed N.C. 152 out of Mooresville and all the way to China Grove. By 4:45 p.m., the cyclists hit U.S. 29 in China Grove and rode into the memorial site in Salisbury at 5:15 p.m.

Among those in the crowd to meet them were Salisbury Fire Chief Bob Parnell and City Manager Lane Bailey.

Parnell said it was sad that the Firefighters Memorial next to Station 5 (at the edge of Chestnut Hill Cemetery) had to be a destination on the Brotherhood’s map, because of the lives lost that it memorialized.

“We’re glad to honor them,” Parnell said, “but we’re certainly sad we have to.”

Parnell described the riders as heroes in their own right, and Bailey thanked the firefighters and law enforcement officers for the public serve they provide daily. Bailey told them to be safe and welcomed them to the city.

After their night’s stay at the Civic Center, the Carolina Brotherhood ride expected to resume about 7:45 a.m. today, go toward the downtown, take a right and head off toward Thursday’s destination of Swepsonville in Alamance County — another 90-mile leg.

On Monday, the ride took the cyclists on a route from Columbia to Greenville, S.C., that covered 110 miles. Tuesday’s Greenville-to-Rock Hill journey put an additional 108 miles behind the riders.

Friday’s leg from Swepsonville to Raleigh will be the shortest at 65 miles.

While the riders wore black shirts and biking shorts and looked like a team, one rider came into Salisbury wearing a frilly pink tutu over his regular attire.

“I kind of fell into it, literally,” said Jeff Plemmons of the Charlotte Fire Department.

Plemmons inherited the pink outfit Wednesday morning after he had a little spill on his bike and skinned up a leg. Whoever is the latest person to have a mishap during the ride must take over the pink from the previous wearer, so the honor then fell to Plemmons.

With the Brotherhood, even wearing pink gives you incentive to keep going.

Contact Mark Wineka at 704-797-4263, or mark.wineka@salisburypost.com. For more information on the Carolina Brotherhood Ride, Honoring the Fall and Their Families, and to donate to its mission, go to www.carolinabrotherhood.com.

Though nursing school building will be razed, its history,…