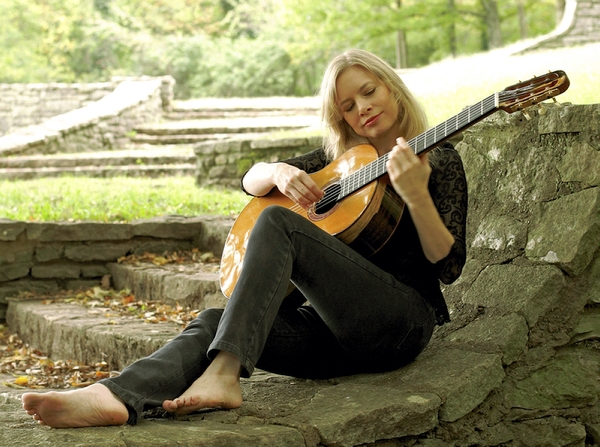 Muriel was personally taught by the talented classical guitarist Christopher Parkening, and mentored by the late great Chet Atkins. Her guitar playing has won numerous accolades worldwide, winning the 2015 Acoustic Instrumental Song of the Year award, and being named one of the top eight female guitarists by Guitar World magazine. She was recently presented the first-ever Play It Forward award by Guitar Player magazine for work with her non-profit Music for Life Alliance, which helps provide access to musical instruments and instruction for young people. Her music has appeared in a Woody Allen film, as well as accompanying NASA astronauts into space aboard the Discovery shuttle.

Muriel’s concert appearance will be at 7:30 p.m., and will feature the local debut of her brand new “Wonderlust” audio-visual show, designed by photojournalist Bryan Allen, which includes beautiful photo and video images of scenes from around the world playing on a 10’ x 10’ screen, complementing her musical performance.

The concert will be preceded by a special guitar workshop at 5 p.m. for guitarists of all skill levels from beginner to advanced, in which Muriel will teach and demonstrate fingerstyle guitar techniques. All participants in the workshop will receive two complimentary sets of GHS acoustic guitar strings (a $20 value). Guitar teachers may call 704-640-0279 for a special workshop discount for five or more students.

Tickets for the events are $18 (advance) and $20 (at the door). A special advance Combo Ticket for guitarists is available for $30, which is good for both events. Doors will open 30 minutes prior to each event. Capacity is limited to 100 seats. Advance tickets are available at Muriel’s website, www.murielanderson.com/tour