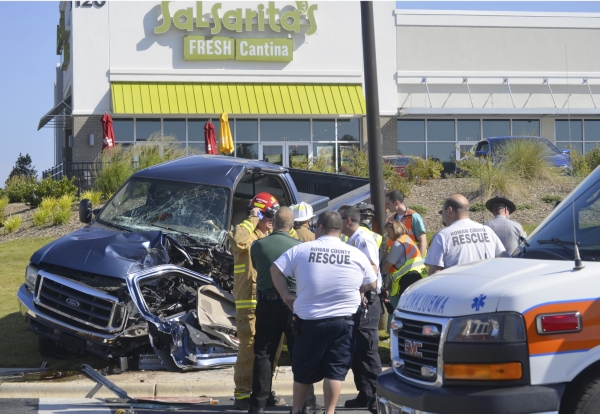 Emergency crews remove a man from this pickup after he crashed into this pole in front of Salsarita's at the Shoppes at the Summit Center. He left the roadway near the Julia Road exit ramp and told officials the last thing he remembered was hitting golf balls at a nearby driving range. Shavonne Walker/Salisbury Post

SALISBURY — Highway Patrol officials believe a possible medical condition led a 48-year-old man to leave the roadway and crash into a light pole in the Shoppes at Summit Center just after the Julian Road exit 74 off ramp.

The man, Steven Griffith, was traveling east in a Ford F-250 when something caused him to leave the road near the exit ramp. He went through a rock bed, drifted back onto Julian Road and turned in to the shopping center entrance. He ran onto the curbing and sidewalk, through the grass and hit a large light pole, said Trooper K.G. Barringer.

His truck bounced off the pole and came to rest a short distance beside it. He was pinned inside the truck and had to be removed using the Jaws of Life. Rowan Rescue Squad Chief Eddie Cress said it took them about five to six minutes to free him. The doors were bowed outward and had to be cut away.

His oil pan was about 600 feet away near the exit ramp, but the truck came to rest in front of Salsarita’s. No other vehicles were involved and he was the only person in the truck. He was conscious at the scene. It’s believed the heat may have caused him to black out.

South Salisbury Fire Department also responded, helped free the man from the truck and helped place him on a stretcher and into a waiting ambulance.

He’s believed to have minor injuries and was taken to Novant Health Rowan Medical Center to be treated. The air bags did deploy. The trooper said impairment is not a factor.

Rowan weather: Another heat advisory — up to 105