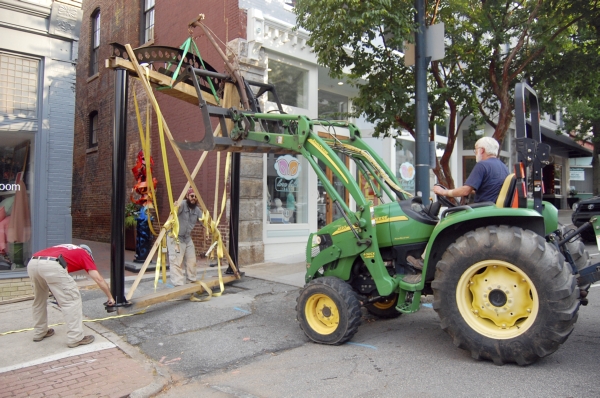 The 800- to 900-pound structure was set up at the entrance of the alley on North Main Street.

Josh Canup, local artist, architect and urban designer, created the archway. He also designed the planters for the alley.

Canup said he has some pieces in Charlotte, but this was his first big piece in Salisbury.

“Salisbury is where I live and my hometown,” he said. “It’s nice to have something here.”

The city approved the closing of the alley from the opening on North Main Street to the end of the building at 119 N. Main St. at a Salisbury City Council meeting earlier this year.

Fifty-five percent of private property owners in the area were in favor of the closing.

At the City Council meeting, Paula Bohland, executive director of Downtown Salisbury, Inc., showed the council conceptual drawings of what the alley could become, including adding public art along the walls, greenery and planters, bike racks and benches.

During that meeting, Canup said he wanted the archway to match the city.

“I’ve been trying to get something to fit Salisbury — the historic, industrial look of the railroad,” he said.

While installing his piece, Canup said he was excited to have his creation represent the alley.