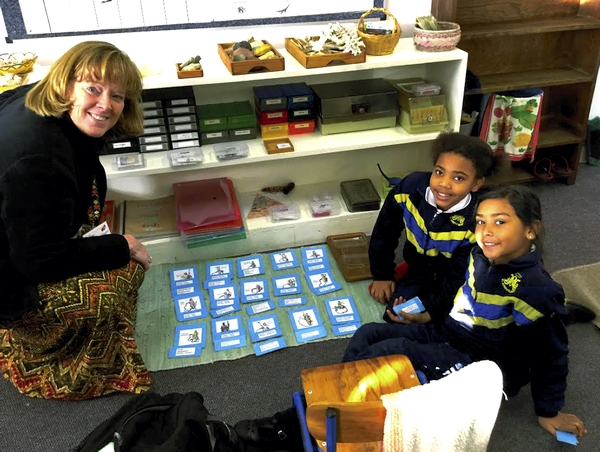 Submitted photo/ Nancy Goodnight poses with students as they play a card game.

SALISBURY — Nancy Goodnight knows education. After all, she is the current Rowan-Salisbury School System teacher of the year.

Still, a recent trip she took to South Africa with the 2016 Global Teachers program — the first time she’s traveled related to her teaching job — was eye-opening.

“I wish every teacher would get to experience something like this,” she said.

Goodnight, who previously taught fifth grade at Millbridge Elementary School and has recently taken a new position with the district, was one of 26 teachers from across the state selected for the June 18-28 trip, which included stops in Johannesburg, Cape Town, and Durban.

Hosted by Go Global NC (formerly the Center for International Understanding), the Global Teachers program selects participants through a competitive application process. Its goal, a press release said, is to help educators “bring the world to their classrooms.”

Go Global NC has been providing international education programs for North Carolina teachers since the late 1990s. Goodnight said the organization spends about a year planning the trips and that last year’s trip was to Singapore. She said South Africa was chosen this year because a travel agent Go Global worked with was a native of South Africa and told the organization about it.

There were differences between the school environments in South Africa and North Carolina. Goodnight said in South Africa, they put more focus on the “whole child,” by having all the children participate in arts, sports and academics.

She said a big difference she noticed was that the children she saw were much more globally aware than the kids she works with in schools.

“Our country could learn a lot from what they’re doing over there,” Goodnight said.

She said she used technology a lot while she was teaching at Millbridge and that another big difference she noticed in South Africa was a lack of technology. She said they seemed to have a “wait and see attitude” towards it, but still were interested to hear about it.

“It kind of felt like you were going back in time,” Goodnight said.

This trip was a once-in-a-lifetime experience for Goodnight, and she said it is one that she will always treasure.

Goodnight said a meeting will take place in October so all the teachers who went on the trip will be able to discuss it and share what they learned and how they will incorporate the experience it into their classrooms.

While on the trip, the group went shark diving, went on an African safari, visited the Apartheid Museum and spent time with students in different schools.

Goodnight said the more memorable parts of the trip for her were the shark diving and seeing the amount of respect students had for teachers and their elders.

Goodnight described her experience during one visit to a school. She said they walked into a large open courtyard area and as soon as the headmaster blew a whistle, the children lined up and immediately became quiet and still.

“Everywhere we went there was such respect and courtesy,” she said. Both private and public schools have a cost for attendance, she added, and the kids really understand why they are in school.

“We have got to put emphasis on education for a better future for all of us,” she said.

Allana Ansbro is a Salisbury Post intern and is a senior at UNC Asheville.

Though nursing school building will be razed, its history,…