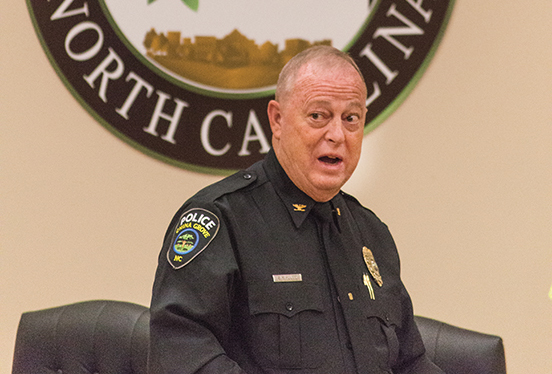 Josh Bergeron/Salisbury Post China Grove Police Chief Eddie Kluttz is leaving the police department and retiring from law enforcement work. The town held a ceremony to honor him on Thursday.

CHINA GROVE — From a lost dog to a major crime, law enforcement officers should treat every case the same, said Police Chief Eddie Kluttz on Thursday.

Kluttz’s comments came during a reception that attracted law enforcement and first responders from across Rowan and Kannapolis. After serving as China Grove’s police chief for more than six years, Kluttz is retiring. His last day is Monday, said Town Manager Ken Deal.

It’s the second time he’s retired. The first came in October 2009, when he left the Rowan County Sheriff’s Office. At the time, Kluttz said he had “no intention” of returning to law enforcement. A couple of months later, he was recruited to be police chief in China Grove — his hometown.

In his Thursday speech to first responders, law enforcement, family and friends, Kluttz talked about improvements during his time at the police department and the state of relations between the community and police.

“I’ve always told my officers that ‘from a lost or stolen license plate to a missing dog, you do the same reports, follow-ups and investigations as you would on a major case,'” he said during his reception on Thursday.

He noted that there’s been one homicide during his time as chief and that the city was recently ranked as one of the 20 safest cities in North Carolina.

Kluttz also said the China Grove Police Department has been more involved with the community since he became chief.

Although the community’s relationship with police can be tense at times, Kluttz said there’s still strong support for the work police officers do. As an example, he recalled an encounter on Wednesday, when his family offered to pay for the lunch of three police officers from another city. The waitress told Kluttz the lunch had already been paid for. His family was the third to ask.

During his retirement reception Kluttz received compliments from former and current colleagues about his time in law enforcement.

Deal, the town manager, said Kluttz has “done an outstanding job.” Deal said the department was “a mess” before Kluttz took the reigns as chief.

“His experience, knowledge and leadership has elevated the China Grove Police Department to a new standard,” Deal said before Thursday’s reception. “Eddie’s high expectations and safety of our police officers has always been two of his priorities. He has certainly made my job easier knowing he is always available to ensure the Police Department is operating professionally and effectively with trained staff.”

Just before presenting Kluttz with a plaque, Kannapolis Police Chief J.W. Chavis also talked about his history working with him.

“I’ve just got to say that law enforcement is losing a good one today,” Chavis said.

Rick Thibodeau, one of Kluttz’s supervisors when he worked for the sheriff’s office, said Kluttz “has always led by example.”

Although Kluttz says he won’t work full time in law enforcement, he plans to continue to work part time. He hasn’t quite decided yet what might come next.

Kluttz’s exit from the China Grove Police Department comes 38 years after he took his first job in law enforcement — the North Kannapolis Police Department. His first full-time job was in China Grove. Kluttz also served in the North Carolina National Guard and was deployed to the Middle East twice.