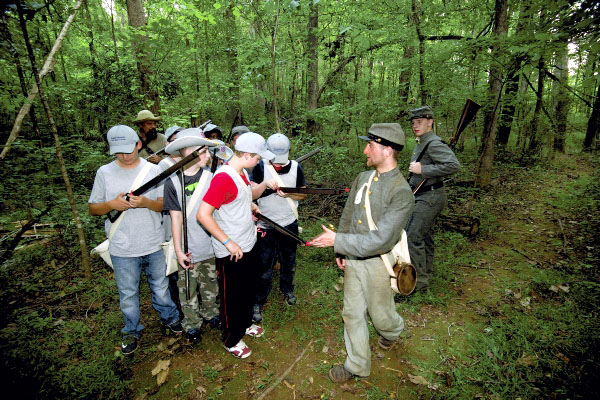 JON C. LAKEY / SALISBURY POST Simon Connolly (right) , a reenactor with the 53rd North Carolina, directs a group of Civil War campers that have been taking part in Rowan Museum's Civil War camp divided into two camps; Union and Confederate. On Wednesday, the campers took part in a mock battle under the guidence of civil war reenactors. Wednesday, July 27, 2016, in Granite Quarry, N.C.

GRANITE QUARRY — The trees behind the Old Stone House echo with the crack of musket fire and the pop of cap guns. Somewhere out in the green, green woods someone yells, “Give ‘em hell, boys!” While another voice calls a retreat.

It may just be a mock battle, but the students attending the Rowan Museum’s Civil War camp get into the role, screaming as they tear up the trail to higher ground, crouching and firing at the opposing side and gasping as they twist and fall to the ground, marked wounded or dead.

Bob Etzler, a Civil War re-enactor with the North Carolina 28th Regiment, crouches at a bend in the trail. Earlier, Etzler and his regiment went out into the woods to get the lay of the land and draw up battle plans for a show-down between Confederate and Union forces.

While the students carry harmless cap guns, Etzler and the other re-enactors have muskets that break the quiet of the woods and flash fire from the barrel. Etzler has been a Civil War re-enactor for more than 10 years, but said he finds real value in using the opportunity to share state history with students.

“We’re losing it,” he said, “You gotta know where you came from because you don’t want to repeat the mistakes of the past.”

After the battle, the wounded soldiers dragged themselves up to a Civil War-style field hospital, set up in the shade of a tree. There, Terry Holt, president of the museum’s board of directors, stands dressed in a bloody apron, waiting to teach campers about Civil War-style medicine.

“They get into it, they really do,” Tricia Creel, museum education coordinator, said.

The students, fully in character and wearing tan or navy jerseys, stagger under the tree, yelling for help, or cluster around the blood-stained cot and ask, “Is he gonna make it, Doc?”

As he works on each patient, Holt dabs makeup and paint on arms and foreheads to create bruises, bumps and bullet wounds, and talks about how common amputation was at the time.

Jude Smeltzer, waiting in line to be seen, said that there weren’t a lot of options if you were wounded during the Civil War. If you were shot in the arm, he said, “Then they just cut off your entire arm.”

Over the course of the week the students spend each day focusing on a year of the Civil War, ending with President Abraham Lincoln’s 1865 assassination, Creel said.

The kids spend the first half of the week drilling and marching, preparing for Wednesday’s battle. And camp highlights include a visit to the guardhouse of the infamous Salisbury Civil War-era prison, a study of diseases and Civil War medicine, munching on hardtack and a bean and pork hock mixture and a skirmish on the grounds of the Hall House. And during every lesson, the students study Salisbury’s role in the war.

“Whatever we do, we try to bring it to a local level,” Creel said.

This is the fifth year the museum has run the camp, designed for rising sixth through rising eighth-graders, and Creel said that every year it’s a little different. This year, 21 students attended the week-long camp.

“We’ve had a really good week so far,” she said.

The museum will host its final summer history camp, a colonial camp for rising third through rising fifth-graders, from Aug. 8 through Aug. 12. Call 704-633-5946 for more information.