See the Perseid meteors Aug. 12 with the LandTrust 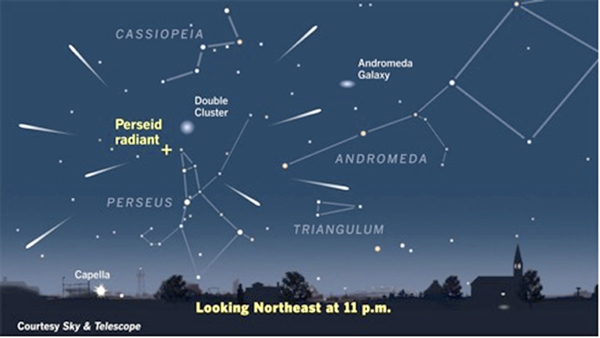 SALISBURY — The LandTrust for Central North Carolina is inviting people to join them Aug. 12 to watch the Perseid Meteor Shower. Beginning at 8 p.m., The LandTrust will be out on a conserved property in Montgomery County, 185 Old Thayer Mill Road, Troy, for a night of stargazing.

According to NASA meteor expert Bill Cooke, the Perseids are perhaps the most popular meteor shower of the year. There will be an “outburst” this year, meaning they will appear at double the usual rates. Instead of seeing 80 meteors per hour, the rate could be between 150 and 200 meteors per hour.

The meteors will seem to originate from the constellation Perseus, which appears on the horizon at approximately 10 p.m. The real show, however, will be after midnight when the moon sets and the most meteors will be visible. The meteors can appear all over the sky, but they will always look like they are streaking away from Perseus in the northeastern part of the sky.

This event is limited to 20 people on a first-come, first-served basis, but there will be a waiting list. Attendees must RSVP on the LandTrust website: http://landtrustcnc.org/2016/perseid-meteor-shower-watch/

For the watch, attendees will need a comfortable chair or blanket to sit on. Attendees have the option to camp overnight. No dogs are allowed except certified service dogs.

This event is free but there is a $10 suggested donation.