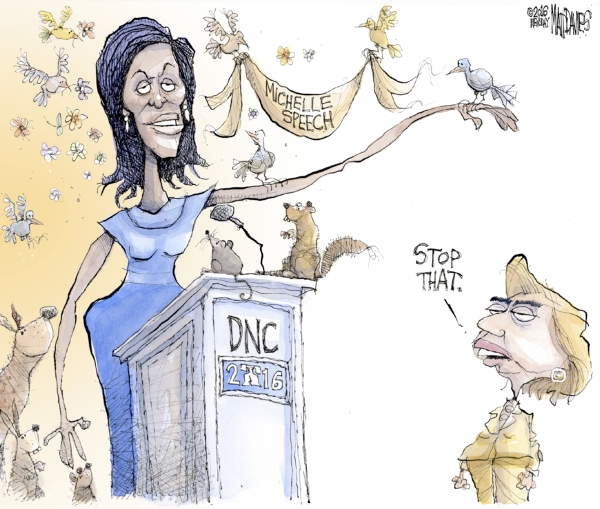 Her inspiring speech at the Democratic National Convention Monday night was one of the few times in this long chaotic political season that I actually felt hopeful that somehow, some way this country might actually rise above the hateful rhetoric and tragic pall we’ve been under.

Clearly, she was there to try to get Hillary Clinton elected. Yes, she spoke in support of protesters and police officers.

But in about 14 minutes, she eloquently got to the heart of what we all have in common: wanting the very best future for our children.

The words that resonated the most were about how she and President Barack Obama have had to teach their daughters not to listen to the hateful things people have said about their father’s citizenship and faith.

And boy have people said some vile and racist things about both their parents. Crazy disrespectful stuff people go to great lengths to try to shield their children from. It’s heartbreaking to imagine what those girls have probably heard and seen.

“Our motto is: ‘When they go low, we go high,’” Michelle Obama said. Let those words sink in a minute.

That’s the definition of grace and dignity. When people are cruel or negative, don’t wallow in the muck with them. This is the foundation on which many of us were raised. It’s a message we all needed to hear right here and right now.

Many political observers pointed out correctly that Michelle Obama stole the show on the DNC’s first night. It’s a given that people will throw partisan rocks and pick apart each word of her speech. Her candidate is not their candidate. That’s fair game.

But I urge people to carefully listen to that speech again no matter who you favor in November.

Michelle Obama spoke of a country of people who have overcome obstacles. Of the greatness of a country in which a black family has lived in the White House for eight years that was built by slaves. Of inclusiveness and accepting differences. Of listening to each other when crisis strikes. Of gender equality.

No wonder she’s so popular. Quite frankly, she’s an optimistic breath of fresh air. She’s been a steadfast advocate for women, children and veterans.

Democrat or Republican, she’s represented all of us well. Here’s hoping we’ll still hear lots from her _ even after she’s left 1600 Pennsylvania Ave.

Leona Allen is a columnist for the Dallas Morning News. Readers may email her at ldallen@dallasnews.com.

GOP is having its ‘come to Trump’ moment