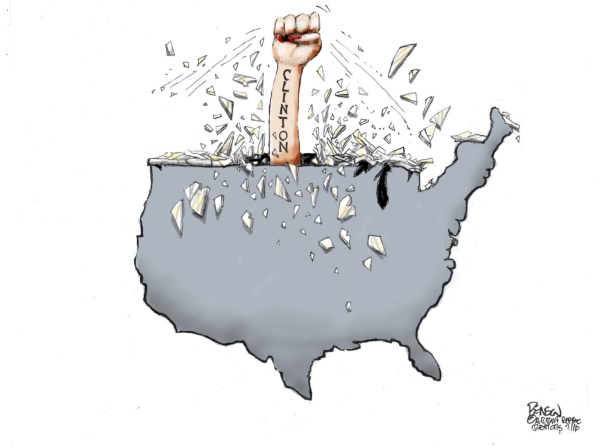 Excerpts from commentary on Hillary Clinton’s nomination for U.S. president:

In an act of amazing self-restraint, the man who relishes the word “I” managed to make the talk, as he prefers to call his folksy speeches, all about her. He was positively uxorious. …

It has been said that the essence of the Clinton marriage is coming to each other’s rescue in critical moments. Or maybe more precisely, their byzantine conjugal dynamic works like this: One of them creates chaos — usually Bill — and then they get out of it together. Or as a former aide described the Clinton pattern: “Hubris. Funk. Reintroduction.”

It is another example of the overcorrecting that marks Hillary’s career. In trying to feminize and maternalize Hillary, Bill almost went overboard about that “girl,” as he called her three times. He poured on the estrogen, presaging his role as helpmeet in the East Wing.

For all the tumult surrounding the Bernie Sanders diehards, (Hillary Clinton)  officially made history as the first woman to be nominated for president by a major American political party. When she appeared live via video, with a little girl at her side, and told America’s girls that she might be the first woman president, but “one of you is next,” well, that was a powerful moment. She was slamming the “woman card” down on the table – and it seemed like a fitting thing to do.

… The potential First Dude and former president gave a different kind of speech, an intensely personal narrative about their courtship and shared love of politics and public service. He went a bit long, but in the end he effectively parried the GOP convention’s “cartoon” portrait of his wife as “Crooked Hillary,” and reframed her as a proven “change maker” who can fix America’s problems. Odd phrasing, yes, but a smart thrust to boost her appeal to an electorate that’s desperate for change. If Team Hillary can make Bill’s image of her the dominant one in the electorate’s mind by November, she’s your next president.

Mrs. Clinton has made one promise over and over again throughout her campaign that is sweeping, idealistic and impossible to meet with detailed tax packages or government subsidies alone.

She vows to close the wage gap for women.

Talking about the gender wage gap is not foreign to Democratic candidates. For Mrs. Clinton, though, it’s been a consistent rallying cry. “It’s time to have wage equality once and for all,” she said in February 2015. “It will be great for the American economy when we finally close that gap,” she told a crowd in October.

… The problem stems from the lack of support in the United States for a parent who’s trying to balance work and child rearing, a job that still mostly falls to women. We don’t guarantee paid family leave, a benefit just 13 percent of private sector employees get, and child care costs remain high. But when women have paid leave and access to steady, reasonably priced child care, their wages benefit.

A week ago, the most Donald Trump and company could offer to viewers their first evening were Melania Trump, a single U.S. senator and several Trump advisers. Monday night, Democrats rolled out not just current First Lady Michelle Obama, but a half-dozen senators and other elected officials representing multiple wings of the party, including progressive heroes in Sanders and Sen. Elizabeth Warren, D-Mass.

The presence of these heavy hitters on the stage sent a powerful message to the attendees skeptical of Hillary Clinton, and held their attention when perhaps lesser lights would have been unable to. What were loud boos when the day began quickly became more and more scattered.

… The stark contrast in speakers at the two conventions is telling: Only one party is united. Only one party had large numbers of its elected officials and past luminaries stay away.