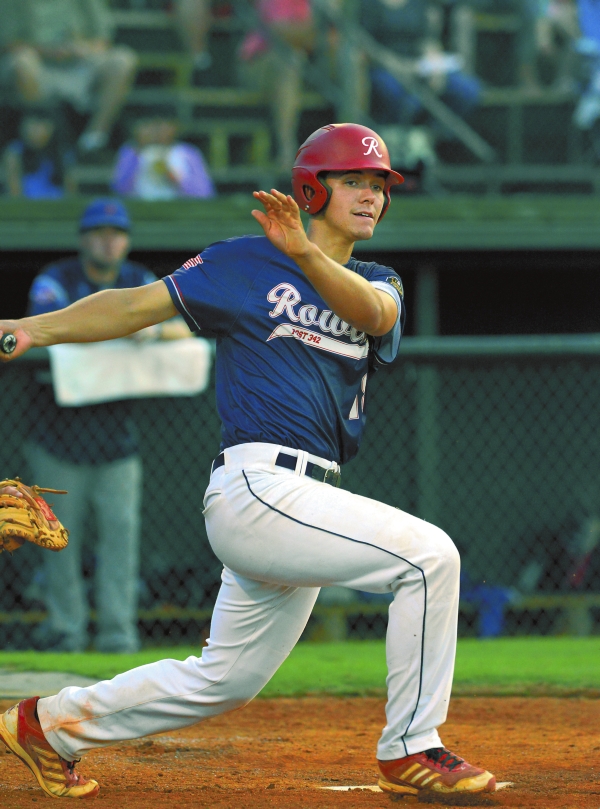 Wayne Hinshaw/for the Salisbury Post ... Hunter Shepherd, one of the stars for Rowan County’s state champion American Legion team, is one of 16 baseball recruits for Catawba College, it was announced by Jim Gantt, head coach of both teams.

SALISBURY — Five of the surnames jump right off the 16-man list of Catawba baseball signees turned in by coach Jim Gantt.
Acosta, Diaz, Lopez, Mendoza, Medina. Those names make it clear this is not a business-as-usual recruiting year.
While Catawba has been tremendously successful for a long time, including a national runner-up finish in 2015, there are new tricks still to be learned and new roads yet to be traveled. Catawba is expanding its recruiting reach and changing its culture.
“We’ve got some guys coming in that are going to give us a different dynamic,” Gantt said.
Catcher/outfielder Kevin Acosta, a switch-hitter and an all-area player in Daytona Beach, Fla., turned down a free-agent contract offer from the Los Angeles Angels following the June draft. Instead he’s coming to Catawba with the long-range goal of becoming a physical therapist. He could be an impact player for the Indians.
Lefty pitcher Abner Diaz and second baseman Alejandro Lopez were educated at the Puerto Rico Baseball Academy near San Juan. They’ve been in an accelerated learning environment for years and Gantt expects both to compete academically and athletically at a high level.
Lopez may be the guy who can feel the hole at second left by the departure of all-region player Dylan Richardson.
Luis Medina, a third baseman who also can catch, batted .400 with six homers for Tampa Prep. He’ll bring power.
“When we were playing down at Tampa this year, all we had to do was walk across the street to scout him,” Gantt said. “We believe he’s going to hit.”
Josh Mendoza, a right-handed pitcher from Bradenton, Fla., was recommended to Gantt by former Catawba catcher T.J. Wharton, who was working a camp when he spotted Mendoza.
People who follow Catawba baseball are aware that three locals — first baseman/pitcher Hunter Shepherd, lefty Bryan Ketchie and right-handed pitcher Sawyer Strickland — signed early with the Indians. They’ve been standouts for Gantt with the state champion Rowan County American Legion team all summer.
Gantt believes Shepherd, a hard-throwing left-hander, has a sky-is-the-limit future on the mound, but he’ll probably be a two-way player for the Indians. Catawba still has veteran star Chance Bowden to man first base, but Shepherd, who leads the Legion team in homers, doubles and RBIs, will compete for DH at-bats as a freshman. Strickland and Ketchie are strike-throwers and smart, pitch-to-contact hurlers who should be able to help the Indians as freshmen.
Strickland and Shepherd were homeschooled, while Ketchie graduated from West Rowan High.
A fourth member of the Rowan Legion team coming to Catawba is West Rowan outfielder/pitcher Caleb Link, who will focus on pitching in college.
“He’ll need to get stronger, but he’s got a good arm and a good slider,” Gantt said. “He’ll probably redshirt.”
Catawba, as is usually the case, landed a talented group from other area American Legion programs.
Hard-throwing right-hander Will Horsley won 17 games and had a 1.96 ERA in his prep career at Concord High.
Nick Borgen was one of the heroes of North Davidson High’s run to the 4A state championship and was the winning pitcher in the decisive game. Borgen also shined for the Davidson County Legion squad. The 6-foot-3 right-hander was planning to walk on with the Charlotte 49ers, but Gantt landed him with a late recruiting pitch.
“He got overshadowed some, playing on such a strong high school team,” Gantt said. “But he can help us.”
Catcher Cameron Morrison (North Moore High, Randolph County Legion) and second baseman JT Dunn (Parkwood High, Union County Legion) also were recruited during the summer. Jackson Raper (Concord Robinson) signed back in the fall, although elbow surgery hampered his 2016 baseball season. Raper, a third baseman, is a good athlete and was an important part of Robinson’s state-championship basketball team.
Cody Fitch, a right-handed pitcher, is transferring to Catawba from UNC Greensboro. Fitch was once the roommate of Catawba catcher/outfielder Zac Almond. Gantt had a chance to watch the former Shelby High star throw when the Rowan County Legion team traveled to Shelby, and Gantt liked what he saw.
“We got there at 8 a.m., and Fitch was waiting on us,” Gantt said.
Fitch, a right-hander with a mid-80s fastball, helped Shelby win the Legion World Series in 2014. As a freshman at UNCG in 2015, Fitch shut out N.C. State for three innings and made 13 pitching appearances for the Spartans, but he was hurt most of last season.
Finally, there’s Mike Manoogian, who hails from New Hampshire but is transferring to Catawba after playing for La Salle University in Philadelphia. Manoogian was highly recommended by Scott Searles, the former Catawba third baseman from New England who was known as “Boston” during his time in Salisbury.
“I haven’t seen Manoogian play, but Searles said he plays the game exactly the same way he did, and that means it’s the seventh game of the World Series every day,” Gantt said. “You need guys like that.”
Catawba will have only two seniors on its 2017 roster — slugging outfielder/DH Malachi Hanes and starting pitcher Russ Weiker — but there’s plenty of talent on the way.