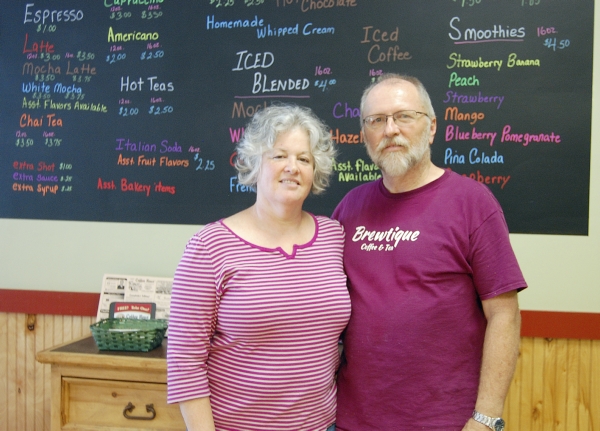 Amanda Raymond/Salisbury Post Terri and Jon Untiedt moved their shop Brewtique Coffee and Tea to 514 S. Salisbury Ave. The location includes an apartment above the business and 200 more square feet than the previous location.

SPENCER — The owners of Brewtique Coffee and Tea have moved their shop from a space in Spencer’s Park Plaza shopping center to 514 S. Salisbury Ave.

Previously at 410 S. Salisbury Ave., owners Terri and Jon Untiedt said they wanted to move to a new location that had apartment space above it.

“Our dream was to live over the business,” Jon said.

They have that at the new location, which they own, as well as 200 more square feet and proximity to Salisbury Avenue.

Jon said he and Terri have been talking about finding a new location for a while. Just as some issues began to arise with the previous location’s landlord, they found that the new location was up for sale.

The location was originally the company store for the Southern Railway Company.

The Untiedts closed Brewtique for three weeks to move into the new space. They reopened three weeks ago.

They have added a few decorative pieces, but other than that not much has changed in the new space. They still serve organic and free trade coffees, espresso, cappuccino, latte, tea and pastries.

Terri said customers have been excited about the new location. She said some customers told her they did not want to stop by the Plaza location because the area always looked empty. Now that the shop is on one of Spencer’s main streets, customers feel more comfortable coming by.

Both loyal customers and new ones have enjoyed drinks at the shop since they have reopened.

Brewtique has been open for about a year now. The Untiedts looked at other in locations in Salisbury and China Grove to possibly move into, but Terry said they preferred to stay in Spencer.

Meeting and conversing with the people of the town is the reason Brewtique does not have a drive-thru. Jon said he wants people to sit and talk.

In the near future, they plan to bring in live music.

The shop is open Monday through Saturday from 8 a.m. to 6 p.m.