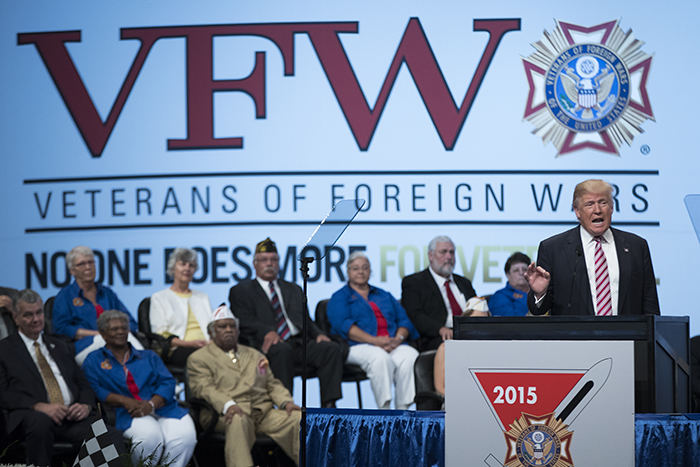 Just one day after Clinton spoke to the same crowd, Trump gave a speech to the 117th Veterans of Foreign Wars Convention in Charlotte. Republican vice presidential nominee Mike Pence also attended but spoke briefly. Like Clinton, Trump’s speech included specific proposals on veterans’ health care and national security. His speech also wandered into economic policy at the end. Unlike during Clinton’s appearance, however, the crowd of veterans repeatedly stood and cheered as Trump delivered a boisterous speech.

“Their message is that things can’t change,” he said about Democrats. “For these people it can’t change. These are the same special interests who have driven the economy into the ground and who’ve created one calamity after another overseas.”

Trump framed himself throughout the speech as a reformer — someone who can fix a “rigged system.”

Less than an hour earlier, for example, Department of Veterans Affairs Secretary Bob McDonald talked to the VFW convention about positive things occurring in VA hospitals. McDonald said 97 percent of appointments are completed within 30 days and 86 percent are completed within seven days. By comparison, Trump said, America’s politicians have failed to fulfill the country’s “most basic commitment” — to provide health care to veterans.

“The VA scandals are widespread and totally inexcusable,” Trump said. “Many have died waiting for care that never came.”

He called scandals over VA wait times a “permanent stain on our government.”

“The other candidate in this race — you know her name, crooked Hillary Clinton, and believe me folks she is crooked — has a much different view,” Trump said to a round of cheers. “She recently said of the VA scandal that it’s not as widespread as it’s been purported to be. It’s like she’s trying to sweep it under the rug.”

Trump’s message appeared to resonate strongly with those in attendance. VFW convention attendees cheered as if they were attending a Trump political rally. Before Trump spoke, in fact, VFW officials reminded attendees that political signs weren’t allowed at the convention.

Albert Brown, a veteran from Delaware, said Trump speaks about issues other politicians don’t. For that reason, Brown said he plans to vote for Trump.

“They just pass it over like it’s nothing, but it’s not nothing,” Brown said about politicians’ view of veterans’ health care. “It matters. And, if you miss your appointment you go back to the end of the line and have to start all over again.”

“I think all of us vets feel very strongly about what happened in Benghazi,” Thompson said.

The chant “lock her up” briefly broke out among the crowd at one point in the speech.

Clinton’s speech tossed implied insults at Trump for not talking about specific things he would do if elected. During his speech to the VFW on Tuesday, Trump talked about his 10-step plan on veterans’ issues.

“We are going to take care of our veterans like they’ve never been taken care of before,” he said.

Other items Trump mentioned during his speech include: appointing a commission to investigate wrongdoing at VA hospitals, asking Congress to pass a bill giving the VA secretary the ability to remove or discipline any employee “who risks the health, safety or well-being of a veteran,” and potentially appointing a new secretary of the VA. Trump didn’t specifically say whether he would fire McDonald.

He mentioned the possibility of establishing a 24-hour White House hotline for veterans to complain about service at VA hospitals. Trump said he’d answer calls if needed.

“This could keep me very busy at night, folks,” he said. “This could take the place of Twitter.”

“The truth is that Trump has a displayed a pattern of disrespect toward those who have served our country,” the joint statement said. “He has lied about his donations to veterans’ charities and shown contempt toward prisoners of war, claiming that Senator John McCain is ‘not a war hero’ because he spent five years in captivity.”

Pence only spoke briefly during the VFW convention on Tuesday. Pence touted his own work as governor of Indiana and said he and Trump, if elected, would “ensure veterans have the resources they need.”

When asked about Pence’s work as governor, Indiana veteran Ron Himsel said the “state is in good shape.” Himsel said Pence is frequently criticized for social issues but not for veterans’ issues.