Peachy keen: Make the most of summer fruit 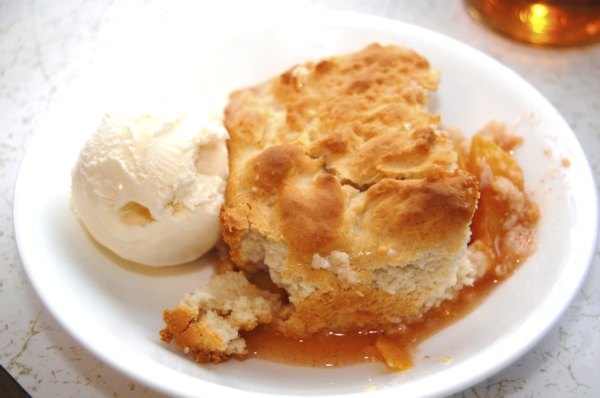 Deirdre Parker Smith/Salisbury Post The best thing to serve with peach cobbler is a scoop of vanilla ice cream.

SALISBURY — Perhaps you’ve noticed a lack of peaches at Farmer’s Markets and roadside stands this year.

Blame that late April freeze. It wiped out peaches at Huffman Farms, for example. An earlier freeze did a little damage, but the hard freeze after a relatively warm spring was devastating.

If you see peaches now, more than likely, they are from South Carolina, Georgia or the sandhills of North Carolina, says Laura Duncan, the horticulture agent with Cabarrus Cooperative Extension.

Other fruits, like blueberries, were not as hard hit, Duncan says. And blueberry growers stagger plantings for a longer harvest, which is why we’re seeing more blueberries this late in the summer.

The peaches in South Carolina were a little more protected, Duncan said. Just an hour and a half from here, 80-90 miles, and there was no late freeze.

The heat is now affecting some crops, such as tomatoes. “The reproductive parts of a tomato shut down in the heat, and all the energy goes to seeking water.”

Any day above 95 degrees, and the pollinators — the bees — are not as active. They’ve got to cool down the hive for the queen, so we’re not the only ones suffering.

California is the No. 1 peach producer, with South Carolina second and Georgia third.

So go out and hunt some peaches, but wear sunscreen, a hat and bring plenty of water. It’s brutal out there.

Cut pound cake into 1/2-inch slices. Place half of cake slices on bottom of a trifle dish or deep bowl; drizzle evenly with half of bourbon. Spoon half of peach mixture evenly over cake slices. Spread half of pudding over peaches. Repeat with remaining cake slices, bourbon, peach mixture, and pudding. Cover and chill at least 2 hours.

Here’s an easy, no cook peach ice cream recipe from allrecipes.com that got a number of rave reviews

Puree peaches with the sugar and half-and-half in batches in a blender or food processor. In a one gallon ice cream freezer container, mix peach mixture, sweetened condensed milk, evaporated milk and vanilla. Pour in enough milk to fill the container to the fill line, about 2 cups.

People who have made it suggest adding up to 1/2 cup sugar (or more) and more vanilla. Some said they did not need to add the extra plain milk. If you have a smaller ice cream maker, you can make a batch, keep the mix in the refrigerator for a day and make the second batch.

Mix Bisquick and milk, adding more milk if necessary, to thin mixture slightly. It should be a bit thinner than for biscuits.

Pour peach mixture into a 9-by-12-inch baking dish, distributing them evenly. Drop large spoonfuls of Bisquick mix on top of the cobbler, then spread as evenly as you can to cover peaches. You can also leave the spoonfuls where they are — the mixture will spread somewhat.

Bake for 40 minutes or so, covering the biscuit topping loosely with foil if it begins to get too brown.

This recipe omits butter and sugar in the biscuit mix and saves a few calories, enough for a scoop of ice cream on top when serving.

This breakfast or brunch casserole sounds just delicious and impressive enough for guests. It comes from The Peach Truck.com

2 Tbsp. butter, plus additional for pan

Salt and pepper to taste, about 1 tsp. each

Preheat oven to 325 degrees. Spread cubes of bread on a baking sheet and place on the center rack of oven to toast for 10 minutes. Remove and let cool.

In a skillet, melt 2 Tbsp. butter over medium high heat. Add onions and cook until they soften and brown, about 10-15 minutes. Set aside to cool.

In a large mixing bowl, add cubes of dried bread, ham and peaches. Toss lightly to combine. Whisk together in a separate bowl the eggs, milk, cream, mustard, sugar and seasoning until well combined.

Add sautéed onion and 1 1/2 cups cheese to the wet ingredients and stir to combine. Transfer wet ingredients to the bowl with the bread, ham and peaches. Toss together to lightly coat the bread.

Butter a 9-inch baking dish and transfer the mixture to the dish. Place in the center rack of oven. After 30 minutes, remove and top with remaining half-cup of cheese. Return and cook for about 30 minutes more, until cooked through and lightly browned on top. You’ll know it’s done when it puffs up and does not jiggle.

Remove from oven and let cool slightly before serving.

Combine sugar, vinegar and water in a large pot and bring to a boil. Boil for 5 minutes. Press one  clove into each peach half and place in boiling syrup. Boil for 20 minutes, or until tender.

Spoon peaches into sterile jars and top with liquid to 1/2 inch from the rim. Put one cinnamon stick in each jar. Wipe the rims with a clean, dry cloth and seal with lids and rings.Process in a hot water bath for 10 minutes to seal.