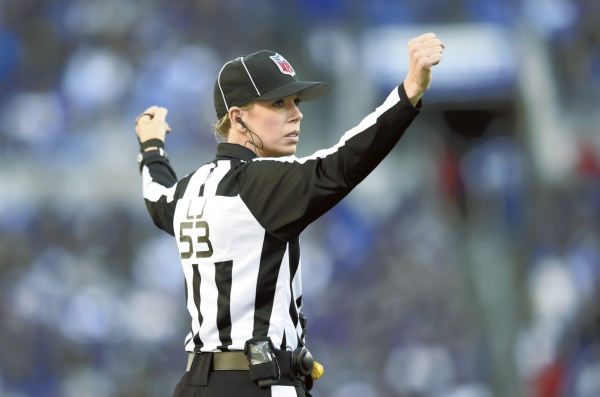 FILE - In this Nov. 15, 2015 file photo, NFL official Sarah Thomas signals in the second half of an NFL football game between the Baltimore Ravens and the Jacksonville Jaguars in Baltimore. Thomas, who was the first female to be a full-time game official in the NFL will again be the NFL's only female game official in 2016. (AP Photo/Gail Burton, file)

IRVING, Texas (AP) — Sarah Thomas was never hit by the pressure of being the first woman to be a full-time NFL game official until after her first season on the job.

It wasn’t until this past offseason that Thomas pondered what really happened after accomplishing her goal, which was to work full-time at football’s highest level and not necessarily being a trailblazer in doing so.

“When I first started all this last year, I said I don’t feel the pressure of it or anything like that, and I don’t feel as if I did during the season,” she said. “But once I reflected back, I knew that there was a lot of pressure. … When I reflected back on it, I thought if something major had happened with being a first, not that I recognize myself as that, but just being a first, that it could have gone one of two ways. So I’m glad that it was a very smooth, under-the-radar, first year.”

Thomas is now preparing for her second season as a side judge. While still the only woman on the field in the NFL, she considers it a compliment that there is much less fanfare this time around.

Dean Blandino, the NFL’s vice president of officiating, agrees and said Thomas “had the same bumps” as any first-year official.

“It was obviously big news last year, but she handled everything so well, and she had such a poise and grace about herself,” Blandino said this month at the NFL’s annual officiating clinic. “It’s a challenge for any first-year official. For a first-year official to also be the first female official, there were a lot of other challenges that came with that and she handled everything really well, and had a good season.”

All nine first-time officials from last season are back this season, and there are three rookies among the 124 officials hired for 2016.

When Pittsburgh’s Le’Veon Bell scored on a wildcat run as time expired for a victory at San Diego to wrap up Week 5 last season, Thomas was the line judge who signaled the touchdown. Bell initially appeared to be stopped, but pushed forward and reached the ball across the goal line just before his knee hit the ground. A replay review confirmed the call was right.

Imagine the uproar on social media and the general reaction had the NFL’s first female official blown that call. Most fans never even realized she was there.

“We just want to be officials, we want to go unseen,” Thomas said in general, and not about that particular play. “You’ve heard it for years and years and years, and it is the truth. If you don’t notice the officials then we’ve done a great job, and that’s what set out to do.”

NFL Commissioner Roger Goodell said during the first NFL Women’s Summit in San Francisco, which was part of Super Bowl 50, that Thomas in her first season “did a fantastic job, and we’re very proud of her.”

Thomas, the mother of three boys, was part of the NFL’s officiating development program in 2013 and 2014 and had worked at minicamps, training camps and exhibition games before getting hired full-time last year. She had officiated for Conference USA since 2007, with assignments including bowl game and two league championship games.

“I never set out to be the first, but when I did speak or I was encouraged with women’s groups, it’s good to hear them ask questions how did you approach it, and for me to be able to say the National Football League had the utmost respect for me as they did any other official,” she said.

Last March, Thomas’ hometown of Pascagoula, Mississippi, renamed its recreational gym in honor of the former high school basketball and softball standout who was also given a key to the city.

Blandino said there are more women in the development program.