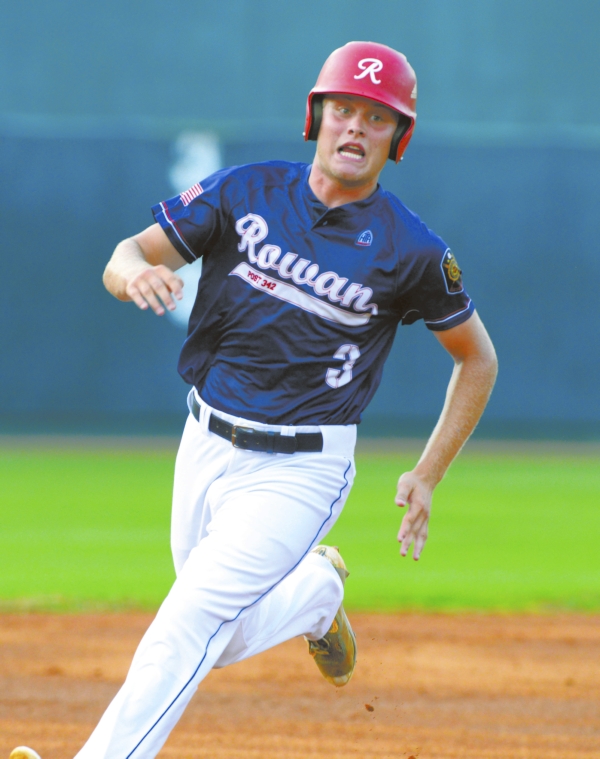 Wayne Hinshaw/for the Salisbury Post ... Rowan County’s Lee Poteat, shown during a game earlier this season, was last night’s hero in the N.C. American Legion Tournament at Wingate. Poteat’s eighth-inning triple lifted Rowan to an 8-5 victory over Caldwell County. Rowan plays for the state championship this afternoon against Union County.

Rowan County’s American Legion baseball program has accomplished a lot of things, including eight state titles, but never has it won state championships back-to-back.
Area III runner-up Rowan has a chance to accomplish that feat today as it takes on host and Area IV champion Union County at Wingate’s Ron Christopher Stadium.

Rowan (32-11) is undefeated in the double-elimination event while Union County (29-3) has been battling through backs-to-the-wall games since it sustained a first-round loss against Garner.
The teams will meet at 1 p.m. If Union County prevails, a second championship game will be required and will be played about an hour after the first game ends.
Lee Poteat’s two-out, two-run triple in the bottom of the eighth was the difference-maker late Monday night as Rowan came from behind to win, 8-5, and end Caldwell County’s season.
Rowan coach Jim Gantt felt a double steal by Tanner File and Brett Graham that occurred during Poteat’s at-bat was a major factor.
“Getting that runner to third — I think that’s probably why they threw Lee a fastball, and he hit it hard,” Gantt said.
Poteat has been Rowan’s leading hitter for average all season — he entered the game at .450 — but he was 0-for-4 with two strikeouts when he stepped into the box with the game on the line in the eighth. He got some encouraging words — unprintable words, Poteat said — from assistant coach Luke Setzer before he walked to the plate.
“The reliever (Jacob Raby) they’d brought in was throwing a lot of strikes, he was getting ahead of us, and he was getting us to chase a lot of curveballs,” Poteat said. “But I got a high fastball to hit. I felt like I hit it good and when I saw it go over the right fielder’s head, I couldn’t slow myself down. I almost ran right out of my shoes on the way to third.”
That clutch hit took the pressure off, and Juan Garcia followed with a booming triple to right-center for a 7-5 lead. Then Brandon Walton’s single plated Garcia for an 8-5 advantage.
“Juan hit a bomb to right-center,” Poteat said. “He just crushed it.”
Rowan’s eighth-inning rally made up for a lot of struggles at the plate and in the field in the early innings.
“We played about as bad as it’s possible to play early,” Gantt said. “We didn’t do the simple things and we made our starting pitcher (Sawyer Strickland) throw a lot of tough pitches in difficult situations. Sawyer actually did a great job because the game could easily have gotten away from us if he hadn’t limited the damage. And then we did a lot of good things late in the game.”
A flurry of gifts from Caldwell (walks, errors and HBPs) and Garcia’s run-scoring double in the third inning helped Rowan take a 4-2 lead, and Strickland held that lead until the fifth. That’s when Caldwell (21-12) scored three runs. Jackson Brown’s two-out, two-run double was the key blow and put Caldwell on top.
Strickland battled through the sixth with the help of 6-4-3 double play, but Rowan still trailed, 5-4.
Reliever Hayden Setzer walked two men but got out of a jam in the seventh to maintain the 5-4 deficit.
In the eighth, Noah Gonzalez, the winning pitcher, relieved Setzer with the bases loaded and one out. Poteat made a good catch on a line drive to right and then he tracked down a flyball to keep the deficit at 5-4.
File started Rowan’s decisive rally in the bottom of the inning with a walk. With one out, Graham, who got on base four times, walked. After Hunter Shepherd hit a flyball to left for the second out, it was all up to Poteat, and Gantt gambled with the important double steal before Poteat smashed his triple.
“And then other guys came through and we had a cushion for the ninth,” Poteat said.
Gonzalez got into a mess in the ninth, with a single, a walk and his own error when he over-ran a tapper near the mound. Gantt was determined not to use Walton or Shepherd in relief — he desperately wanted to save those two arms for today — and Gonzalez got the job done. He got a big strikeout and then he got Raby, the leadoff man, to rap into a game-ending 6-4-3 twin killing — Graham to File to Shepherd.
“Noah really came through,” Poteat said. “But we knew that he would.”
Caldwell left 14 men on base. Rowan stranded 12.
Gantt indicated John Owen, who won in the first round on Friday will get the start against Union County today. If Rowan is in position to win that first game, Walton and Shepherd might be called on to close it. If Rowan gets down in the first game, Shepherd most likely would be saved to start Game 2.
Poteat sounded a bit surprised that Rowan had never won back-to-back titles, but the St. Andrews signee wouldn’t mind being part of history.
“If we could do it back-to-back, that would be really cool,” Poteat said.