Yesterday: When Enola Gay crew members gathered in Mocksville in 1991 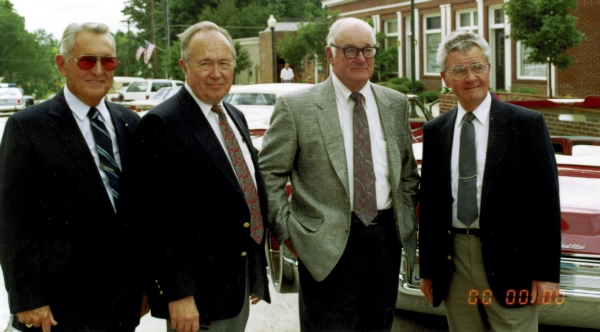 David Harrison submitted this photograph he took in Mocksville on May 27, 1991, when several hundred Davie Countians gathered in Mocksville to honor their native son Thomas Ferebee with a short parade at town square and the dedication of a historical marker on U.S. 64 marking his birthplace. Ferebee was the bombardier on the Enola Gay, the B-29 that dropped the atomic bomb on Hiroshima, Japan, Aug. 6, 1945. Joining him that day were three of his best friends, including two fellow members of the Enola Gay crew. From left, are Col. Harry Boothe; Maj. Theodore “Dutch” Van Kirk, navigator for the Enola Gay; Ferebee, who retired from the U.S. Air Force in 1970 as a colonel; and Brig. Gen. Paul W. Tibbets, the pilot of the Enola Gay. Ferebee died at age 81 on March 16, 2000, in Windermere, Fla. Tibbets once called Ferebee ‘the best bombardier who ever looked through the eyepiece of a Norden bomb sight.’ Harrison’s time stamp on his photo for when the film was developed was 1992, but Post files show the event to have occurred in 1991. He said he took the photograph knowing what an important event in history these men represented.