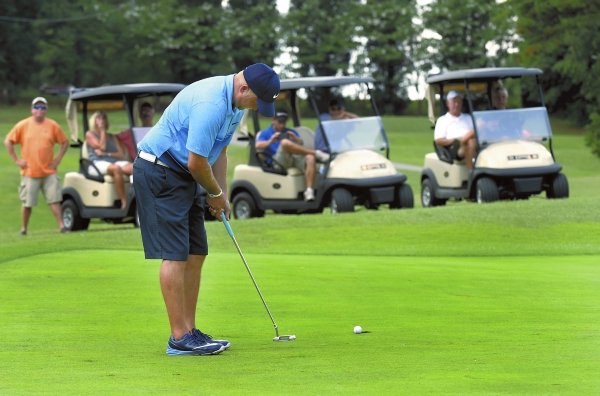 Keith Dorsett makes his putt for the win in the first playoff hole in the Horace Billings Rowan Amateur Golf Tournament at the Corbin Hills Golf Club. photo by Wayne Hinshaw, for the Salisbury Post

SALISBURY — Keith Dorsett refused to let his round go to the dogs on Sunday during the final match of the 38th Horace Billings Rowan Amateur at Corbin Hills Golf Club.

Dorsett defeated old friend Kevin Lentz, 1-up, in 19 holes, to claim his third title in this annual event.

A few minutes earlier, on the par-5 18th hole, both Lentz and Dorsett had eagle putts. Lentz’ putt had just missed, so Dorsett had a chance to close out the match with a 15 to 18 footer, including two feet of fringe.

As soon as Dorsett’s putter began moving towards the ball, a dog from a nearby home went on a loud barking tirade. Dorsett left the putt short.

“That dog got me, made me tense up a little bit,” Dorsett said later, able to joke about it in victory. “But it’s just one of those things. You have to put it behind you and move on.”

Lentz had no noise to deal with his putt nearly went in for eagle on No. 18.

“It was really close,” said Lentz. “At about six feet out, I thought it was in. It was breaking right towards the hole and just wiggled left. I had already started marching it in, then it slipped by.

“Then the dog barks on Keith’s back stroke on his putt,” continued Lentz. “I was joking with Keith on the way to the carts that I thrown that dog a bone.”

Both players made their birdie putts and moved on to No. 1, their 19th hole in the brutal afternoon heat.

Dorsett used a perfect drive to set up his 70-yard approach that got within six feet, although downhill a little. Lentz was also above the hole in regulation, but had 12 to 15 feet for birdie, a tough, downhill breaker.

Lentz ended up with a three-putt bogey and Dorsett settled for par to win the championship.

“Where that pin placement was, you didn’t want to be above the hole,”said Dorsett. “But I made a mental mistake of hitting above the hole, too, just not as far as Kevin did.

“I hate winning a match with my opponent three-putting, I’d rather win by making a birdie or something like that,” he continued. “But par was good enough this time. I was glad it was over and I’m sure he’d like to have that hole back.”

Dorsett, 37, and Lentz, 36, have been playing with and against each other since they were kids. They even saw each other in high school golf in the late 1990s, Dorsett at South Rowan and Lentz at East Rowan.

So there was no surprise that the final was very close throughout the match. Neither player was ever more than 1-up at any point during the round.

Lentz was 1-up for much of the front nine, but Dorsett won No. 7 and No. 8 to go up by one. Lentz then birdied No. 9 to square the match again.

Dorsett went back on top at No. 12, when Lentz’ second shot on the par-4 hole missed the green and he ended up with a bogey. However, Lentz immediately bounced back by sticking his tee shot on the par-3 13th to within two feet, winning the hole with a birdie.

Lentz then took another one-hole lead when he won No. 14 after Dorsett hit his tee shot out of bounds. But Dorsett promptly won No. 15 when his birdie evened the match once again.

“Kevin and I have played a lot of golf together and this afternoon was brutal,” said Dorsett. “For 16 holes, it seemed like we were just playing, to get to the last three and let’s go see who wins. He would throw a blow and I’d come right back with one.”

After the dog had his say on No. 18, Dorsett had the final blow on the first extra hole.

On Sunday morning, Dorsett defeated Derek Lipe, 6 and 5. “Luckily, I only had to play 13 holes this morning,” said Dorsett. “I played really good and Derek didn’t have his best day.”

“Hats off to Keith,” said Lentz. “I had six birdies and minimal errors and he still won, got me on the 19th hole.”

Lentz added that he takes pride in his ability to scramble. “That’s a spot-on description of my game. Like I’ve said before, I don’t always play from the fairway. I have so much passion for the game that I’ve always tried to stay in every shot on every hole. It’s a hard thing to do, but I try not to get too high or too low.”

A solid local golfer, Lentz said that this was the closest that he has come to winning the Billings Rowan Amateur in eight tries. In the annual Labor Day tournament at Salisbury Country Club, Lentz and Shane Benfield were runners-up a few years ago to Richard Cobb and Joey Boley.

Lentz has also been medalist at the Rowan Masters Tournament twice, and made it to the semifinals once in that event.

In addition to his third Billings Rowan Amateur, Dorsett has won the Rowan Masters event seven times. He has also won the Labor Day Tournament, playing with Eric Mulkey in 2004.

“Again, this was a brutal experience and I feel very fortunate to have won,” said Dorsett. “You win five matches in three days in this heat, it’s basically not who played the best golf maybe, but who outlasted the others, endurance-wise. It was maybe the hottest three-day stretch that I remember.”