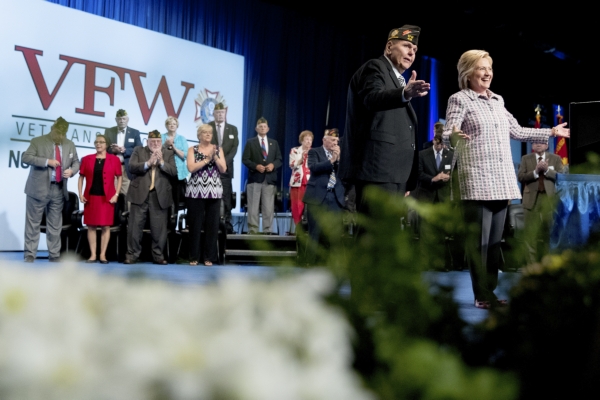 Never mentioning his name once, Clinton addressed a number of previous statements made by Republican presidential nominee Donald Trump. She also laid out specific national security and veteran-related proposals she would pursue if elected president.

“Americans aren’t just choosing a president. We’re also choosing a commander in chief — the person who decides questions of war and peace, life and death,” she said. “There’s no more solemn or serious a responsibility than that. So, you deserve to know what we candidates believe about national security and how we’d go about making life or death calls.”

An estimated 12,000 veterans from across America are in Charlotte for the convention. On Tuesday, Trump will give a speech to convention attendees.

If you want somebody who will scapegoat other people, peddle fear, and smear, I’m not your candidate,” Clinton said. “I’m interested in bringing everybody together, rolling up our sleeves, and getting to work to solve our problems.”

Clinton said it’s important to treat all soldiers with respect, including those who identify as lesbian, gay, bisexual or transgender. Roughly one year ago, Trump infamously said U.S. Sen. John McCain, R-Az., wasn’t a war hero because he had been a POW during the Vietnam War.

“Here’s what I want you to know: I will get up every single day in the White House and do everything I possibly can to protect our country and treat our men and women in uniform with the care and concern and respect they deserve,” she said.

Clinton added that she would ensure America honors its promises to veterans.

As she talked about veterans and foreign policy, Clinton touted an endorsement from Retired Marine General John Allen. In a news release about the endorsement, Allen said Clinton understands the complex issues involved in making military decisions. Clinton said she was “deeply honored” by the endorsement.

“Veterans know loose lips sink ships – there’s no doubt that someone who is so cavalier in their handling of state secrets could sink us all,” Rabin said in the news release, referencing Clinton’s use of a personal server to store emails during her time as secretary of state.

Clinton briefly talked about her experience in the U.S. Senate on foreign policy and national security issues. She also spoke about some of her specific policy ideas, including refraining from “privatizing” Department of Veterans Affairs hospitals. Republicans refer to “privatizing” the VA as increasing access to care for veterans who can’t get an appointment in a timely manner.

“We have got to have a 21st century Department of Veterans Affairs that delivers world-class care,” she said. “Like you, I was outraged by the VA scandals. People were waiting months — even years — for things like wheelchairs and basic medications, some even dying while languishing on a wait list for an appointment.”

Reforming the VA would be among her highest priorities, Clinton said.

“We are not going to privatize the VA,” she said. “We are going to reform it and make it work for every single veteran in America.”

“I don’t doubt that she supports veterans at all, but there are some other policy positions that I have an issue with,” Staehlin said.

For Wadesboro resident Eddie Little, the Monday speech only strengthened his support for Clinton.

“I’m going to vote for her regardless,” he said.

Clinton’s speech to veterans was unlike her rally earlier this month in Charlotte. Attendees politely applauded at regular intervals and added occasional cheers on Monday. There were also some attendees who dislike Clinton at Monday’s event. At one point, for example, a man shouted “What about Benghazi?”

Clinton’s Monday speech was open to the convention attendees — not the general public.

“I don’t see how you run for president of the United States if you spend all your time trash-talking the United States,” she said. “We’re going to have a convention this week that highlights success stories.”

As Clinton spoke, Democrats struggled with their own internal disputes after party chairwoman Debbie Wasserman Schultz resigned under pressure following the release of hacked Democratic National Committee emails. The emails seemed to show the party had favored Clinton over her rival, Vermont Sen. Bernie Sanders.