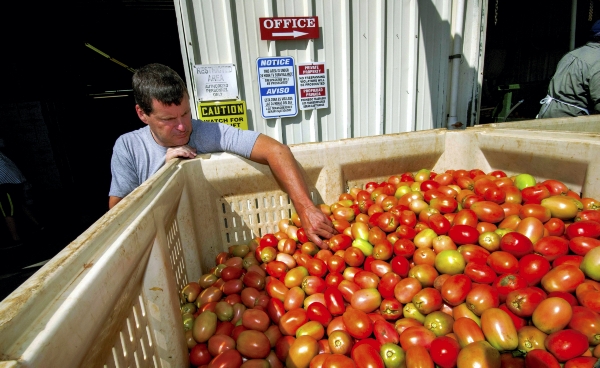 WOODLEAF — Tomato culture runs deep in the Woodleaf area. There’s the Tomato Festival, being celebrated for the 10th year in August, and a Tomato Drop to bring in the New Year.

“Tomatoes are very important for our farm,” he said.

Although the farm has diversified by growing other vegetables, it still relies on tomatoes for a big chunk of its income.

Correll’s father and uncle started Correll Farms in 1959, and he said some farms have been growing tomatoes for close to 90 years.

“It’s a tradition in the area,” he said.

Summer is tomato season for this part of the country, and Rowan County is no exception. Local farmers said this year’s tomato season has been a good one, despite the dry weather.

According to Danélle Cutting, N.C. Cooperative Extension agent who specializes in agriculture, specifically horticulture and local food, Rowan County has about 300 acres of tomatoes in production.

“Some are still being planted for a later crop, so that number could increase,” she said in an email.

Rowan County has the warm, sunny weather and good soil to grow all those tomatoes, Cutting wrote.

Correll tomatoes are also found at the Salisbury and Davidson farmers markets and delivered straight to homes through the farm’s home delivery program. The program delivers a variety of fresh, in-season fruits and vegetables to local homes.

David Correll said the farm’s tomatoes are picked when ripe and used for fresh markets.

The area has been in a bit of a dry spell, but Correll Farms and other local farms use irrigation to water the tomatoes.

“As long as we continue to have enough water in the ponds, we’re OK to keep the tomatoes wet,” Correll said.

Correll said they can actually grow a better crop in a dry year because they can dictate the amount of water the tomatoes get.

All the employees at Correll Farm are local residents, but other farms hire help from other countries to pick the large tomato crops.

Cutting wrote that migrant workers are employed at local farms though the H-2A program, a program that allows U.S. employers to bring in workers from other countries to work temporarily, according to the U.S. Citizenship and Immigration Services website.

The employer has to meet specific requirements to participate, including proving that there are not enough U.S. citizens who are “able, willing, qualified, and available” to do the work, according to the website. Employers also have to provide excellent housing.

“Without the program, many of the produce would go unpicked,” Cutting wrote.

Wetmore Farms and Patterson Farm both use migrant workers from Mexico to help pick their tomato crops while local employees work in the packinghouses.

Doug Patterson of Patterson Farm said they would not be able to find enough workers to get the picking done if it was not for the program. The farm provides housing and transportation for the migrant employees.

Woodleaf does have a monopoly on tomatoes, of course. Patterson Farm, at 3060 Millbridge Road in Mount Ulla, is one of the largest staked tomato producers in the state.

Doug Patterson, who is over packing and shipping operations and sales, said the farm started growing tomatoes in 1919. It has 220 acres of tomatoes this year.

Patterson said they use the area’s clay soil to their advantage.

“We know how to do it and it works well,” he said.

Patterson said the farm ships 12-15 tractor-trailer loads of vegetables a day —peppers and cucumbers as well as tomatoes — to places all over the eastern U.S., Canada and Puerto Rico.

Patterson said the farm has to deal with weeds, bugs and weather issues, but the biggest problem is competition from California and Mexico, which have longer growing seasons.

They sell tomatoes to grocery stores and small chains. Watson said the tomatoes are shipped to Virginia and then to places like Kentucky, West Virginia and Ohio.

Owner Arty Watson said this summer’s hot, dry weather has been good for tomatoes, but also a paradise for  spider mites. The mites feed on the tomato plant and cause the fruit to get sunburned.

Experience has taught Watson to employ the necessary actions to keep the mites from ruining the crop.

Like the other farms, Watson said Wetmore has had a good growing season this year.

Tomatoes are still an important crop for farms around the county, and it seems like they will continue to be for years to come.