The heat is on: A new champion will be crowned in this year’s Billings Amateur 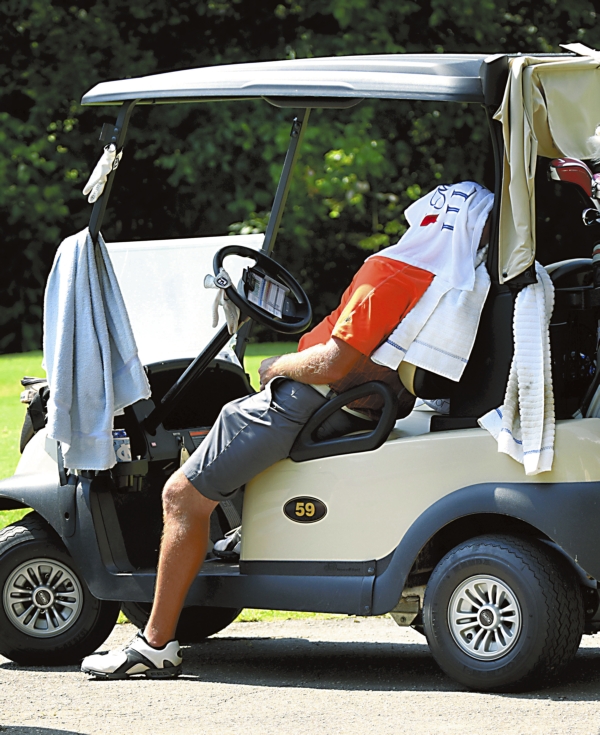 Wayne Hinshaw / for the Salisbury Post With temperature in the high 90s at the Corbin Hills Golf Course, Keith Dorsett reacts to heat with towels over his head in the shade in the Horace Billings Rowan Amateur Golf Tournament on Saturday.

SALISBURY — In the unique and dramatic world of match play golf, many times the best score does not win. It is all about winning each hole and beating your opponent.

Saturday in the 38th annual Horace Billings Rowan Amateur tournament at Corbin Hills Golf Club, the field was whittled down to the final four competitors, who will square off today for the championship. The special nature of match play golf was on full display.

Defending champion Nick Lyerly, 17, one of the top junior golfers in the state, posted 7 birdies and an eagle in his afternoon quarterfinal match yet the pinpoint accuracy and power of veteran golfer Brad Vinson, 45, prevailed 1-up in 19 holes. Kevin Lentz spent much of his quarterfinal match in the rough or the woods but posted 16 pars and won 1-up over Ross Brown. Derek Lipe needed an eagle 3 on the par 5 18th Saturday morning to get past Shane Benfield 1-up, then got his putter going in the afternoon with a 3 and 2 win over Sean Kramer.

“Playing one hole at a time and playing against your opponent…that is the adventure of match play,” said two time Amateur champion Keith Dorsett who advanced to the semi-finals for the first time since he won it all in 2012. Dorsett slipped past Abraham Post in the quarterfinals 2 and 1 by winning holes 16 and 17 with a par and birdie respectively. He is the only semi-finalist who has won the tournament in the past but says it is not necessarily an advantage to him.

It was significant that the eight golfers who advanced to the quarterfinals Saturday afternoon were also the top eight qualifying seeds, led by defending champion Lyerly and medalist Dorsett (71). Vinson’s win over Lyerly may be categorized as a surprise because Lyerly is the current NC Amateur champion and just finished in the top 16 of the US Junior Amateur last Thursday. But that again is the nature of match play golf.

“I drew one of the two or three best players in this county today,” Vinson said. “I just happened to catch him when he didn’t have his best stuff.” Despite his string of birdies, Lyerly was victimized by some errant drives including a crucial one hit out of bounds on the 15th hole to drop him one down. After both drained long putts on 17 to keep the match going, Vinson hit out of bounds on 18 to allow Lyerly to tie the match and force extra holes.

On the first extra hole, the par 4 first, Vinson crushed a drive to within 40 yards of the green. He then chipped to about sixth inches from the hole for a gimme birdie. Lyerly had a chance to extend the match with a 15-foot birdie putt but it lipped out to give Vinson the win.

“This is the farthest I have ever gone in this tournament,” Vinson said. “I am having a good time and I’m playing with guys I know. So win or lose tomorrow, I will have a good time.”

Lipe, who was a semi-finalist last year, had an impressive win over Sean Kramer in the quarterfinals with a hot putter. His birdie on the 10th put him 4-up and he ended up winning 3 and 2. “I hit the ball really solid and the putts were starting to go in finally.” Lipe said. “Hopefully I can keep that going Sunday.”

Like most the quarterfinalists, Lipe said the extreme heat (upper 90s) Saturday afternoon took its toll on him. “Fatigue for me set in on about my 27th hole today,” Lipe noted. “It was kind of hard for me to get around on the ball after that.”

Lentz, the fourth semi-finalist, proved again to be the most unorthodox match-play competitors because for him every hole is an adventure…but he keeps on winning. “I very seldom play from the fairways,” he said. “Since I have done it for 25 years playing a lot from the woods I have gotten pretty good at it.” His secret is to recover dramatically, make his chip shots and sink his putts.

Lentz was one down to Brown after 15 but hit a strong six iron to within 10 feet and evened the match. It stayed that way until 18 when Lentz hit his drive up against a tree. Brown, who had been hitting fairways all day, missed his chance to capitalize when his drive went out of bounds down the left side.

Lentz was able to recover as he has done so often. “I was able to rest my back on the tree and kind of swing at my feet,” he said. “I hit it 40 or 50 yards but at that point I realized that was all I needed.” He sank his par putt to win the hole and the match to advance to the final four.

The semi-finals tee off at 8 a.m. this morning with Lentz facing Vinson and Dorsett taking on Lipe. The two winners will battle for the Rowan Amateur title at approximately 1 p.m.