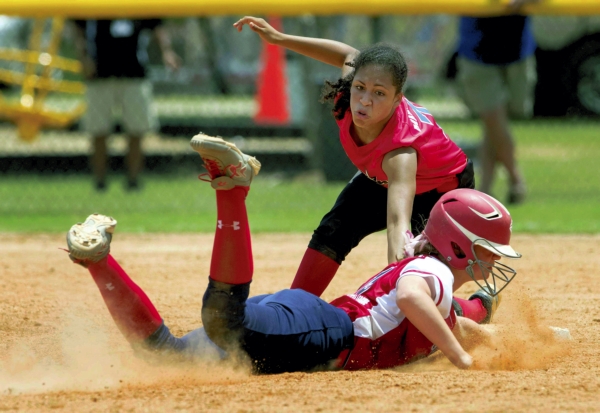 JON C. LAKEY / SALISBURY POST Rowan’s Olivia Marshall tags Virginia’s Ashley Perrey out at second base after she hit a rocket to the outfield fence but was unable to beat the throw from the center fielder to second.

SALISBURY — The challenge was serious on Saturday, but Rowan Little League’s 14U softball team responded and beat a stout Virginia squad, 6-1, to move into this afternoon’s Southeastern Regional championship game.
Rowan is scheduled to play at 1:30 p.m. today at Salisbury Community Park with a trip to the Junior League World series in Kirkland, Wash., at stake.
Aubrey Tuell pitched a complete game, Olivia Marshall ran wild on the bases, center fielder D’Nahjah Harrell made an astounding defensive play, and pinch-hitter Caitlin Mann provided the biggest hit of the day for Rowan.
If it sounds like a team effort, that’s because it was. Tall Virginia lefty Rilee Baughan brought nearly as much heat as Mother Nature, but Rowan’s blinding speed turned five walks and seven hits into six runs.
Rowan pitcher Kali Morton, hero of the run to the 12U World Series title last summer, is sidelined with a pulled muscle, but Tuell, an unflappable right-hander with a non-stop smile, got the job done smoothly in the circle for the second straight day.
“I didn’t know if I’d start today, but when Coach told me I was pitching, I was ready,” Tuell said. “I just didn’t want to walk anyone. This team makes amazing defensive plays, so I counted on my defense. It takes a lot of pressure off when you know you can just throw it down the middle if you have to, and someone is going to make a play.”
Tuell stifled a Virginia offense that had battered the Georgia and Tennessee state champs, allowing five hits and fanning eight. Behind her, teammates turned in a sharp performance that had manager Johnny Meadows smiling.
“Very good effort,” Meadows said. “Tuell only walked one, we had a very good defensive game, Mann had the huge hit, and we executed on a lot of at-bats against the best pitcher we’ve seen. We saw that girl’s other two games, and she pitched her best game against us.”
It was tenser than it sounds, as Rowan led only 3-0 before working for three little-ball insurance runs in the bottom of the sixth.
Rowan scratched out a run in the first inning when leadoff batter Marshall walked, stole second, moved to third on a wild pitch and was awarded home on an illegal pitch.
Virginia put two girls on base in the second and the third out of that inning was a little scary. It appeared shortstop Hailey Lane and center fielder Harrell might collide on a soaring popup, but Harrell, the taller of the two — by a lot— made the catch.
“Hailey was backing up and calling for it, but then I saw I could catch it and called her off,” Harrell said.
Mann had struck out as a pinch-hitter in the bottom of the first, but Meadows sent her to the plate as a pinch-hitter for Tuell again in the third with two out and two on. This time Mann came through with a run-scoring single to right for a 2-0 lead.
“When your role is pinch-hitter, it puts some pressure on every at-bat because if you make an out you don’t get a chance to redeem yourself in the field.” Mann said. “I’m glad I got a second opportunity today, and I was definitely thinking opposite field all the way.”
When Lucia Barbon’s grounder eluded Virginia’s third baseman, Rowan had another run and led 3-0.
Virginia slashed two rockets off Tuell in the fourth. Right fielder Rylie Warren chased down a long blast off Baughan’s bat and made the catch in deep right-center to start the inning.
The next batter was cleanup hitter Ashley Perrey, and she stroked a line drive to left-center. The ball bounced to the wall with Harrell in hot pursuit. Harrell not only got to the ball in a terrible hurry, she threw a strike to Marshall, who was covering second base. Marshall had the ball waiting for Perry as she slid in. Harrell dangled her right arm up in the air for a while like she’d just drilled a 3-pointer, and you couldn’t blame her.
“I took the right angle on that ball,” Harrell said. “That helped me make a good throw.”
Tuell owned the fifth with two strikeouts. There were two well-hit outs in the sixth, but left fielder Lauren Coughenour tracked a flyball and gloved a line drive smacked right at her.
Rowan’s three-run bottom of the sixth that put the game out of reach was a blur. It all happened with two out and no one on base.
Harrell beat out an infield hit, stole second and third, and scored on a single to right by Coughenour. Then all heck broke loose on a drag bunt by Warren. Coughenour scored from second, and Warren circled the bases as the Virginians made two errors.
Perrey singled to start the seventh for Virginia. That led to the run that spoiled the shutout when Tuell was called for an illegal pitch.
“They’re calling it very close,” Tuell said.
•••
NOTES: The format for the tournament is “modified double elimination,” which means the team that comes through the losers bracket to play Rowan today will only have to beat Rowan in the championship game. It won’t have to beat Rowan twice. “It’s a one-shot thing,” Meadows said. … Meadows said the news on Morton was pretty good. She has a pulled muscle, not a torn muscle. It’s highly unlikely she’ll pitch today, but she might be back in action if Rowan can reach the World Series. … Third baseman Lucia Barbon had a double for Rowan and made good plays on bunts. … First baseman Imara Harrell walked twice and scored a run. … Marshall was responsible for some excitement when she tried to sprint all the way home from first base on a passed ball that the catcher had trouble locating. She was called out, but it was bang-bang. … There was a delay in the third inning when an umpire was overcome by the heat.

The heat is on: A new champion will be…