No vacation for hunger: RSS feeds thousands of kids over summer 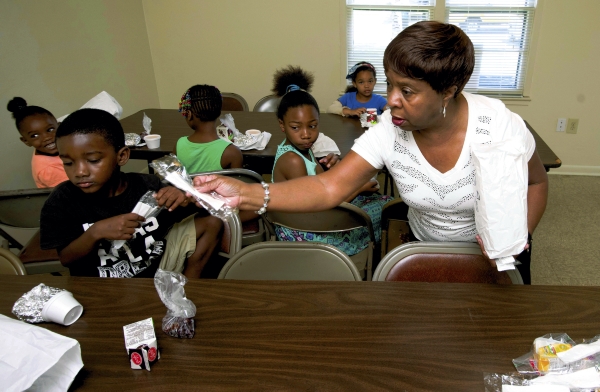 SALISBURY — Donnie Williams lays on the horn of his yellow Penske moving truck, and the children appear, tumbling out of apartments and running down the streets.

When he goes to open the back of the truck, they’re waiting for him, and he hands out free, bagged lunches with a smile and a high-five. Williams, lead employee at Knox Middle School, doesn’t let the July heat or the lack of air-conditioning in the back of the truck bother him — it’s the kids that are important.

By the end of the day, Williams will have passed paper bags containing chicken sandwiches, grapes and peach cups to several Knox students. Wendy Yates, William’s summer co-worker and lead employee at Isenberg, also sees kids she knows during her daily routes with Rowan-Salisbury’s Summer Feeding Program — kids who have confessed to her that they don’t want to go on summer break because they know food will be scarce.

“It rips your heart out,” she said.

But feeding students during the nine-week program eases an ache of worry, and Williams said it’s a pleasure to see them, “knowing that they’re eating, they’re smiling.”

Summer feeding programs are not a new idea. In fact, the national, USDA-sponsored Summer Food Service Program is just two years shy of its golden anniversary. Rowan-Salisbury’s program is under that federal umbrella. It’s been tweaked, here and there, and each school system runs it differently, but there’s one thing that hasn’t changed — every summer children rely on its trucks, buses and tents for their daily meals.

Williams himself depended on the program as a child. He used to spend long summer days at Long Street Park in Salisbury waiting for his mother to finish work, and would snag breakfast and lunch from the trucks that stopped there. But for nearly 20 years, he’s been the one handing out food.

Summer feeding programs “bridge the gap” between the end of one school year and the start of the next when families may struggle to put food on the table, said Meredith Honeycutt, a school nutrition administrative assistant with Rowan-Salisbury Schools.

“We have a huge need here,” she said.

According to the U.S. Census Bureau, 27.8 percent of Rowan County children were living in poverty in 2013, and Honeycutt said that in the 2015-2016 school year, 64 percent of all Rowan-Salisbury Schools students were on free and reduced lunch.

But program staff estimate that they’re reaching less than half of county children who need food this summer.

“It breaks your heart because you know they’re out there, they’re hungry and you want to feed them all,” said Wanda Pender, school nutrition manager at North Elementary.

Last year, the program grew by 20 percent, Honeycutt said. It takes a year of planning and a fleet of buses and rented trucks to pull off, but by the end of the summer Rowan-Salisbury Schools will have handed out free lunch, breakfast and snacks at 90 sites around the county.

Some routes, like Williams’, hand out hundreds of lunches each day, averaging more than 20 children at each site, while other sites have only a handful. But to the passionate people who run the program, numbers don’t matter.

While trucks and buses provide breakfast and lunch at nearly 50 summer camps, the program also hosts 21 “open sites” in neighborhoods around the county, where a trained, volunteer site supervisor provides shelter and seating to any child who shows up. All meals have to be eaten on site, unless there’s a heat advisory or severe weather on the way.

Lisa Altmann, child nutrition supervisor with Rowan-Salisbury Schools, said that staff never know how many children will come to an open site. But they’re determined to fight hunger, wherever they find it.

“It’s more than just not eating — it’s everything.” Altmann said.

Hunger can impact children’s sense of self worth and their ability to plan for the future, leaving them with feelings of hopelessness and helplessness, she said. According to a report from Children’s Health Watch, lack of access to regular, healthy food can impair brain development, causing a lag in cognitive and social skills, and can lead to increased risk of illness and disease. The USDA also notes that children who miss breakfast and lunch are more likely to be sick, disruptive, inattentive and may score lower on achievement tests.

But in rural areas with far-flung housing and no central area, setting up a food site can be challenging.

“It was easier for us to just go and be the site,” Altmann said.

Every summer a handful of activity buses divide their time between 19 of the more rural sites. The buses will pull up a street, honking, before coming to a stop. Any children nearby can climb aboard and eat their lunch on the bus.

“We are the site,” she said. “We are their restaurant.”

One activity bus, dubbed the “Yum Yum Bus,” was donated by the school system and has been outfitted with air-conditioning, diner-like counters and bench seating. Altmann said all it’s missing is a horn that plays “The Wheels on the Bus.”

But there are still gaps in the routes. Altmann said that drivers keep their eyes peeled for neighborhoods with swing sets, playgrounds or toys lying in the yard — or for “poverty pockets,” small areas with a concentrated poverty level that may not show up on maps or in data.

“Unless you’re right there, you’re not going to know they’re there,” she said.

And sometimes, it’s the kids themselves who come with a plea. Altmann and Honeycutt both told a story about a young girl who came to a mobile site at the Bull Hole in Coolemee. She told the driver that there was a street out in Woodleaf — her street — with lots of kids who weren’t able to make it to other sites, but they were hungry. Could the bus please come? Then, she pulled out a piece of mail, tore off the return address and handed it to the driver. The number of children was scribbled on the back.

But opening a new site with a federally funded program isn’t so easy, Honeycutt said. There are requirements. The site has to be located within Rowan County, and at least 50 percent of children living in the area have to qualify for free and reduced lunch.

Eligibility can also be judged by checking an address directly on the USDA’s website.

If they qualify, additional sites then need to be approved by the N.C. Department of Public Instruction, which parses out the federal funding for the program. Honeycutt said it takes about $275,000 to get it off the ground in Rowan County, with all monies provided by the USDA.

The new Woodleaf site — and four others — passed muster. And while Altmann said they can’t expand too much or too quickly without compromising effectiveness, they try to do what they can.

“It’s very humbling,” she said, “We cry, because, you know, these kids depend on us.”

Altmann has big plans for the program. She wants to set up televisions in the diner-like “Yum Yum bus” to play nutritional programming, to partner with community members to offer programs and games at sites, to be able to customize the rental trucks and to have something similar running all year round — in the evenings, during long breaks or any time that a child may need food.

Reality is a bit stickier. Still, Altman takes pride in how far the program has come, just in a single year: this year each truck has someone who can speak Spanish, the “Yum Yum” bus took its maiden voyage, the Rowan Public Library’s Bookmobile trundles along to seven of the sites, every Rowan-Salisbury student has a library card and the trucks hand out free books on Thursdays. Parents can even look up open site locations using an app called Nutrilice.

And no matter what happens, the team running the buses and manning the kitchens know that they’ve managed to dull the edge of child hunger in Rowan.

“You feel like you’ve done something important when you feed a child,” Pender said.

For more information, or to see how you can help with the program, contact Meredith Honeycutt at 704-630-6047. Books can be donated at the Wallace Educational Forum at 500 North Main St.