Riding Route 66: End of the road for another summer adventure 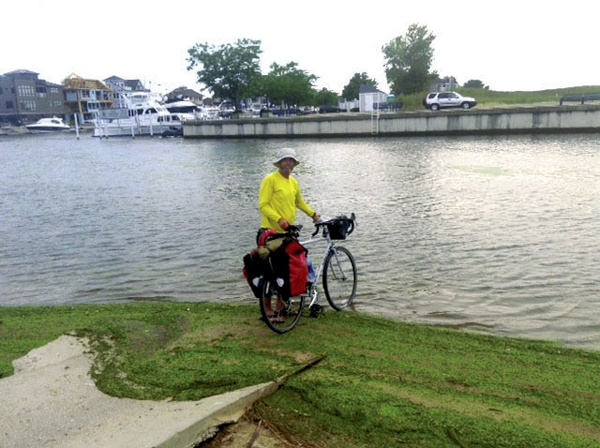 Photo by David Freeze Freeze dips his front tire in Lake Michigan at New Buffalo. This was on Thursday night ahead of returning to Indiana from Michigan. Though Route 66 had less to do with the water than some of his previous rides, it is still a tradition to ceremoniously close out the adventure.

After 38 days on the bike, another wonderful journey has come to an end this afternoon. My nephew picked me up in Walton, Ind., shortly before 2 p.m. I had left Bremen, Ind., early this morning as soon as it was light enough to see and looked forward to nearly a full day of riding through the Indiana farmland.

Last evening, I found a last-minute motel room in Bremen and decided to stay largely because a Dairy Queen was close by and my last pineapple milkshake was in sight. I got it and was surprised to see at least 30 Amish and Mennonites in the DQ. One of the farmers asked me where I was biking, and of course that started a nice conversation. His wife and daughter joined in for a very pleasant end of the day.
The farmland around this part of Indiana was perfect for today. I chose three roads to get to Walton that I hoped would be good roads with sparse traffic, and that is what I got. State Roads 331, 25 and 35 had lots of farm scenery and good shoulders, plus plenty of unhurried people who threw up their hands to wave as we met or I passed by.
One of the things that I noticed today as I rode south, my shadow was right beside me just pedaling away. The shadow seemed to be keeping up effortlessly, but maybe my own pedaling required less effort too on such a day filled with retrospective thought.
I passed through a few notable towns that included Bourbon, Rochester and Logansport. All of them were beautiful in their own way as mid-America towns. Lots of older homes, some spectacular in how well restored they were, along with historic looking downtowns that were just what I wanted to see. I passed some little towns too, Tippecanoe and Talma included. Talma had a historical marker that said it was the only town of that name in the United States, a real claim to fame.
Another historical marker also caught my eye. The Potawatomie Indian Tribe was sent on its own Trail of Tears in 1838. The marker recognized the site of the first Indian child’s death. The tribe was forced to march from Indiana to Kansas and many didn’t survive.
I reached Walton just a couple of minutes before my nephew Sammy and decided to meet him at the Marathon convenience store. I pulled to a stop and checked my distance reading for the day. Amazingly, the last day of my Route 66 ride ended with exactly 66 miles!
It was an amazing day to cap an incredible adventure. The bike and I are both fine and I’m sure it won’t be long until we both are ready for more. Tomorrow will be the last post on this journey. I will share some of those retrospective thoughts and maybe something about the next ride.
Let’s meet back for those final and future thoughts tomorrow. See you then!