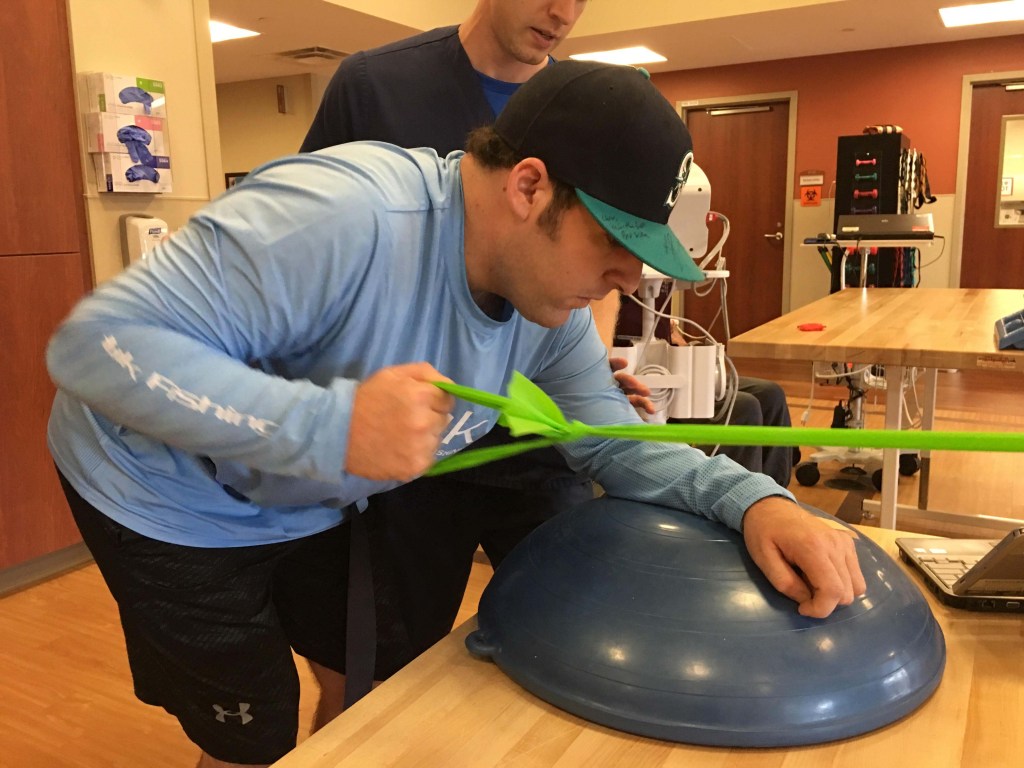 CONCORD — Chase Deal sits in a wheelchair in the middle of his expansive room — a suite, really — at Northeast Rehabilitation. He’s just completed a demanding morning of physical therapy, but his piercing blue eyes are bright.

Would you turn him down?

June 15 was a normal Wednesday for Chase. He got up and went to work at UPS, where he delivers to the Mooresville, Kannapolis, and China Grove areas. Late in the day, a kidney stone started bothering him. It had cropped up the week before, so he didn’t think too much of it. He only had 10 stops to go, but he told his boss he had to leave.

He and his wife, Annie, and his mom, Julie, went to the emergency room at Lane Street in Kannapolis.

He received IVs for pain, and that’s the last thing he remembers. Four days later, he woke up in ICU. Late in the night — doctors still don’t know why — Chase, 28, went into cardiac arrest four times, and sometime during that harrowing night suffered a stroke.

“That’s the scariest thing I’ve ever been through,” he says.

When he finally came to, he heard voices around him, but he couldn’t open his eyes.

A crowd gathered to support Chase. He’s close to his parents, Ronnie and Julie, and to his two older sisters and brothers-in-law, April and Jason Smith and Stacy and Brandon DeRhodes. He’s especially close to his cousin Greg Deal. He’s just one of those guys who has a lot of friends. He played football and baseball at South Rowan — he graduated in 2006 — and remains close to former teammates. Church friends from First Reformed in Landis. School friends. Family friends. Fishing buddies. Co-workers. They were all there. At one time, Julie said, more than 90 people spilled from the waiting room.

On that fourth day, Chris Wagner was standing by Chase’s bedside. He was talking to him, and holding his hand. Chase could hear him.

“C’mon buddy, you got this,” Chris said.

“I could hear him,” Chase says. “But I didn’t know what was going on.”

Then Chris said something that got Chase’s attention. “We still got a lot of fishing to do.”

“When I heard the word ‘fishing,’ I opened my eyes and looked at him,” Chase says. “To know you have friends like that is just amazing.”

Friends and family continued to visit Chase during three weeks of rehabilitation. Chase transferred to NorthEast Rehabilitation after six days in the Acute Coronary Care Unit and five days on the neuroscience floor.

On this particular Friday morning, he’s looping around the courtyard. It’s bright and sunny, but for the moment, the courtyard is mostly in the shade. It’s a pleasant time for Chase to take a stroll with Dave Hysell, one of his physical therapists.

The stroke has caused weakness on his left side, so he’s working on walking and balance. Chase, who is left-handed, has developed a great rapport with all of the therapists. After all, they’re peers.

“His therapists are amazed at how much he’s progressed,” his mom says. Because Chase was a fall risk, she and Annie, a cosmetologist, took turns spending the night. Julie, who works for Dr. David King at King Eye Center in China Grove, stayed Thursday and Friday nights. Annie’s mom, Traci Anderson, stayed on other nights.

His dad, a brick mason, visited during evenings, but did not spend the night.

The plan was for Chase to go home this past Tuesday, his mom’s 59th birthday — which he did.

“It’s the best birthday present ever,” his mom says.

In his job with UPS, Chase walks up to 12 miles a day — an advantage in his quick recovery.

“He had a strong body to begin with,” Julie says.

Chase woke up talking, she adds. “When he came off the ventilator, he said, ‘Mom what happened?’”

Julie experienced a weird sense of deja-vu as she’s watched her son learn to eat and walk again. “Except now he’s big and I can’t pick him up and carry him.”

Although she probably wants to.

Chase has done everything asked of him during physical therapy. There have been times Julie has put a sign on the door for no visitors — Chase was simply wiped out.

This morning, Brent Donahue has stopped in. He and Chase play golf together most Sundays, Brent says. “Shoot, we were playing golf the week before this happened.”

They’ve spent time over the years at sports events and family gatherings.

“If you need something, give him a call, and he’s gonna be there,” Brent says.

Brittany Cunningham, a friend of Chase and Annie’s, has put together a fundraiser set for Saturday, July 30, at 3340 N.C. 152 — the site of the former Hog Heaven antiques store — from 11 a.m. to 3 p.m. The property belongs to Walker Snow’s family. Walker and Chase are longtime friends, Julie says.

Although Chase has good insurance through UPS, the fundraiser will help Chase and Annie with out-of-pocket medical expenses and other non-medical expenses. Annie’s work schedule will also be reduced, as Chase will have to have someone with him all the time for awhile.

Local vendors will donate a portion of proceeds to the family. They include: Lula Roe, It Works, Scentsy, The Lettered Lily, Thirty-One, Tupperware and Mary Kay. Food and drinks will be available for purchase from Rolling Smoke BBQ, and there will be a raffle of $20 per ticket to win a 45-quart Yeti cooler.

Lauren Lowe has also started a page on Go Fund Me, and Amanda Eller has started a You Caring page.

Nearly all of the 50 UPS drivers who work out of Kannapolis have been by to see Chase.

“My supervisors came and visited, and they said, you put on the browns when you can and get back to work. Your job will be waiting,” Chase says.

He may not wear that brown uniform for a year, he says. “Right now, it’s day by day. I know what it’s gonna take. Right now, if I’ve got to go out and get on a UPS truck, I can’t do it. So therapy is my focus right now.”

Back in his room, Chase wraps up his morning session with Dave, and they talk about Chase’s outpatient rehab schedule.

“He works really hard,” Dave says. “He gives more than 100 percent at every session, and he has a great support system. It motivates us to keep thinking of new ways to challenge him.

“Thanks, dude,” Chase tells Dave when he leaves. “I really appreciate it.”

“We need to let everybody know how grateful we are,” Julie says. “It’s just been overwhelming. You don’t realize how much this kind of support matters. God’s been good, and he continues to bless us.”

Each day in rehab, Annie asked Chase to name three things he’s grateful for, and she wrote the answers on a small dry-erase board. Today’s words: I can walk, no memory loss, I keep trusting in the Lord.

“I didn’t really want to do therapy,” Chase admits. “I thought it would be a waste of time, but I am so glad that I came over here. Three weeks has been a long time. That first night in ICU, I couldn’t feel anything, and I laid there and cried all night. I prayed. I thought I might be in a wheelchair the rest of my life. But three weeks later, I’m walking around the courtyard.”

These weren’t the first tears Chase shed over the past couple of years. He and Annie have endured miscarriages, and the delivery of a stillborn son, Hutch, on March 23, 2015.

Through it all, Chase says, “We’re just keeping our faith in God. As hard as it is to keep the faith, you have to.”

About that heaven story. Listen to Chase.

“I’m walking through this field. I knew it was heaven. There are flowers, and streams and creeks, and people everywhere, little kids everywhere.

“Suddenly, I hear ‘Daddy! Daddy! Daddy!’ I turned around and knew it was Hutch. He was running right to me. I hugged him and I said, ‘Son, Daddy’s home. I’m here.’ He said, ‘Daddy, you can’t stay. Mommy needs you. You’ve got to go back home.’

“He was just a little ol’ thing when he was born, and when I saw him, he was like a 6-year-old. He was just running around and playing and having the best time.

“I used to be afraid to die. If I die right now, I’m definitely going to heaven. I’m not afraid now.”