Beat the heat: How to survive when it feels like 100-plus 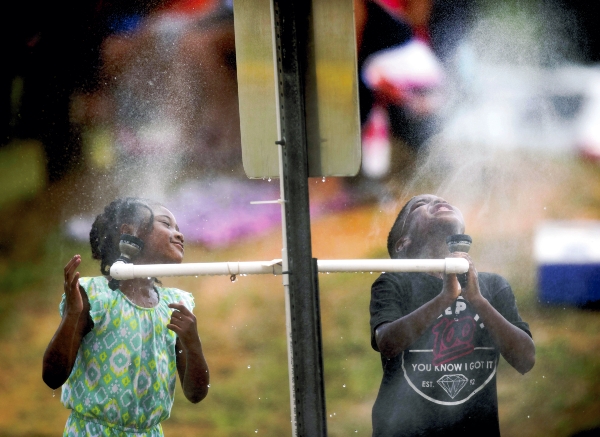 SALISBURY — With temperatures near 100 degrees expected, staying hydrated will be key this weekend.

Heat values in the Piedmont region, including Rowan, could reach 105 degrees over the sunny weekend.

To beat the heat, the city’s Parks and Recreation department set up misters at Salisbury Community Park so fans attending the Junior Little League Regionals could cool off. Drinking water was also available.

And fire departments are protecting crews battling blazes in this heat by giving them frequent breaks, medical monitoring and plenty of fluids.

To recover from heat exhaustion, use fans, cold cloths or even a cold bath, she said. Fluids are best replaced with a sports drink, water with 2 teaspoons of salt added for every 8 ounces, or an electrolyte solution, she said.

“Heat exhaustion can progress to a serious condition called heat stroke, so it should be treated right away,” she said in an email.

Egbe-Tanyi added that heat stroke is an extreme medical emergency. Symptoms can include: confusion, fainting, a body temperature of 104 degrees or higher, hot and dry skin, nausea and vomiting, rapid heartbeat, quick and shallow breathing and loss of balance. She said people should call 911 right away in an instance of heat stroke.

Another suggestion mentioned by Cooper includes staying in a place where air is circulating and seeking shade if possible. People can also take their shade with them by using an umbrella, he said.

Using an umbrella make look strange during sunny weather, but he said it’s useful to take a break from bright sun.

“You’re carrying your shade with you,” he said.

Although temperatures could reach the high 90s this weekend, things aren’t projected to cool off much into next week. High temperatures are expected to remain in the 90s.