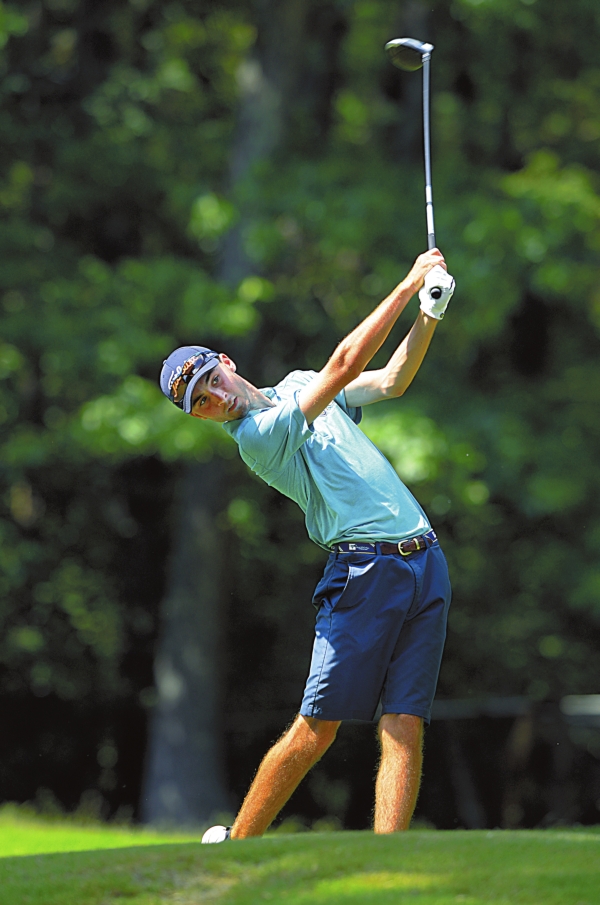 Nick Lyerly teeing off in the Horace Billings Rowan Amateur Golf Tournament at the Corbin Hills Golf Club. photo by Wayne Hinshaw, for the Salisbury Post

Lyerly made a mad dash from Tennessee on Thursday night and opened defense of his Rowan Amateur title with a 6 and 5 win over Pete Kuld. Dorsett, a two time champion, led qualifying with a one-under 71 last week and stayed hot with a solid 7 and 6 victory over Matt Brittain. Neither were adversely affected by a one hour and 20 minute thunderstorm delay midway through the opening round.

A total of 32 golfers squared off in match play competition to open the event that dates back to 1979 and is now named in honor of Billings, the late long-time sports editor of the Salisbury Post. Of note, six time champion Gary Miller played in the original tournament 38 years ago and most of the others that followed including this year. Miller was a first round victim of 6th seed Derek Lipe, 6 and 5.

Much of the interest and intrigue this year centered on Lyerly, who was the automatic qualifier due to his 2015 Rowan Amateur championship. But on Thursday the 17-year-old rising senior at East Rowan was locked in a competitive battle in the US Junior Amateur tournament at the Honors Course near Chattanooga, Tenn. When he knocked off Joaquin Niemann of Chile, the ninth ranked junior in the world, on Thursday morning it looked like his title defense back might be in jeopardy. Unfortunately, he lost to top U.S. junior golfer Noah Goodwin in the afternoon 3 and 2, in the round of 16.

Lyerly made it clear he intended to play back home if at all possible. “I was definitely going to play unless I was still in Tennessee,” Lyerly said. So he and his mom drove home Thursday night, arriving around midnight. “It was a little tiring but if I do happen to make it to Sunday matches again this year, I will take a couple of days off”

Other than a couple of errant drives during his front nine, Lyerly showed no ill effects of his hectic travel schedule. He notched five birdies enroute to his 6 and 5 win over Kuld.

If Lyerly does make it to Sunday competition, he may well face Keith Dorsett who last won the tournament in 2012 and is playing extremely well of late. In dispatching Brittain, 7 and 6, Dorsett logged four birdies plus an eagle on the par five 6th to pull out to a big lead by the 10th hole.

“I wasn’t real pleased with the way I hit the ball but I putted a lot better than I have been lately, ” he said. “And that is what made my score as good as it was today. ”

The other top qualifiers in the tournament also got off to great starts on Friday. Third seed Sean Kramer rolled past Ben Gragg 6 and 5, noting that it was a good round “…except for that four putt on number eight to halve the hole.”

The fifth seed Kevin Lentz overcame some close encounters with the trees to win 5 and 4 over David May while fourth seed Ross Brown had little trouble with Matt Miller 7 and 6.

Playing in opposite brackets, father and son, Jon Post and Abraham Post both were winners. Jon defeated Michael Dorsett 4 and 2 while Abraham, a student at UNC-Chapel Hill, topped Alex Safrit 7 and 5. “My match was close until the rain delay then I came out pretty hot to pull away,” Abraham Post said. “I was hitting fairways and greens, fairways and greens.”

For his victory, Jon Post now gets the task of facing the defending champion Lyerly this morning at 8 a.m. “You know what, I am really looking forward to it,” Post said. “I have followed him in the newspaper all summer and his accomplishments are unbelievable (including the N.C. Amateur title a few weeks back). I am just going to have fun and do my best.”

Another intriguing first round match-up featured two oldest competitors as George Benfield slipped past three-time Amateur champ Ronnie Eidson 1-up. “They put us together for entertainment,” Benfield said with a laugh. “But we both played well for our age. I think we were both three or four over.”

Because of the rain delay one of the first round matches was suspended due to darkness. East Rowan grad Christopher Queen is one — up on Mitch Swaringen with four holes to play. The two will have to tee off at about 7:30 a.m. today to finish the match and see who advances to second.

By the end of the day Saturday, the field will be down to the final four. Semi-finals will then follow early Sunday morning with the championship finals on Sunday afternoon about 1 p.m.

• Christopher Queen 1-up over Mitch Swaringen through 14 (susp. by darkness)