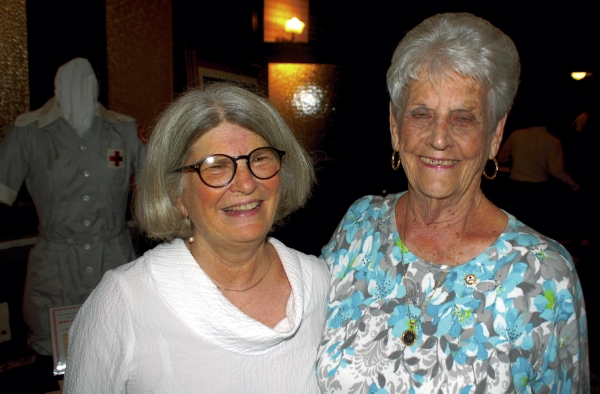 It was fitting to recognize Faggart’s half-century accomplishment during an evening that celebrated the Red Cross’ 100th anniversary year in Salisbury and Rowan County.

“She is a bright and shining volunteer,” said Sheila Crunkleton, executive director of the Southern Piedmont Chapter, a six-county region that now includes Rowan County.

The Red Cross presented Faggart with a 50-year pin and an engraved award plaque. Through the years, Faggart regularly has volunteered at Red Cross blood drives in both Salisbury and her adopted New Orleans.

An organizational meeting for the first Salisbury chapter of the American Red Cross was held June 30, 1916. Thursday night’s dinner, with entertainment by the Salisbury Swing Band, marked the 100th birthday to the day of the recording of the chapter’s charter July 21, 1916.

Through the years, the local American Red Cross chapter has been on the front lines as a service organization during World War I and World War II. It provided valuable nursing care here during the Spanish flu epidemic after World War I, as well as assistance during the years of the Great Depression.

On hand for the 100th-year celebration was Angela Broome, chief executive officer of the 47-county Western North Carolina Region of the American Red Cross.

“We have deep roots in this community and an extraordinary history,” Broome said.

Some notable figures stand out in the Red Cross’ local history, including longtime board member and chairman Reid Leonard, who was in attendance; former Executive Directors Judy Banish and Evelyn McMahon, also at the dinner; the late Evelyn “Pat’ Wellman, who served as local director from 1937 to 1982; and the late Beverly Jones, who was the Salisbury office assistant for 50 years.

Elizabeth Hanford Dole, a Salisbury native, served as the national American Red Cross president from 1990-99, and the Hanford Dole Center, from which the local office has operated since 1997, recognizes the donations Dole and her late brother, John Hanford, made toward the building.

Broome said Salisbury’s local office was the first of several in her region which will be having centennial celebrations in coming months. Salisbury’s chapter is considered the third oldest in North Carolina behind Wilmington and Asheville.

Dari Caldwell, president of Novant Health Rowan Medical Center, said an American Red Cross local chapter was the first volunteer board she ever served on.

She also was the disaster nurse on call, and Caldwell said she learned from her Red Cross work that it is an organization that spends every dollar it receives to the best of its ability in helping others. The organization and what it does to replenish the blood supply through its many drives also is of vast importance to the hospital, Caldwell said.

Paul Fisher, chairman emeritus of F&M Bank, said he can remember as a 6-year-old the Red Cross putting out a call to local families for their help in meeting a troop train coming through Salisbury during World War II.

At the Red Cross’ direction, Fisher recalled, his family traveled to Salisbury and “crammed” as many soldiers into their car. They took the soldiers back home, fed them and found a place for them to sleep, before driving them back at the station early the next morning for a connecting train.

Speakers during the evening included Sgt. Matt Cooke, who was shot five times during the November 2009 shooting at Fort Hood, Texas, in which 13 died and Cooke was among the 30 wounded. Blood supplied by the Red Cross was important in his survival and recovery, Cooke said.

Cooke’s family is heavily involved in working for Red Cross.

For 11 years, Jerry has worked on 26 large disaster responses across the country. In addition, both Jerry and Diane volunteer with their local disaster team, helping to respond to home fires in their community and teaching as disaster instructors.

Mike and Tammy Mallimo also were on hand for Thursday’s dinner, representing a local family who had received assistance from the Red Cross after a fire damaged their home.

Their youngest daughter, Chloe, had just turned 5, and she lost all of her birthday gifts in the fire. The Mallimos all stood outside in the November cold without jackets or shoes, and Mike Mallimo said the sight of Red Cross volunteer Bruce Rider, who also is a member of their church, brought them a great deal of comfort that night.

The Red Cross has two big local blood drives coming up, celebrating its 100 years in Salsbury:

• From 8 a.m.-5 p.m. Tuesday, a blood drive will be offered at the Salisbury Civic Center, 315 S. Martin Luther King Jr. Ave. For appointments, donors can call Perri Coltrane at 336-403-4301, or go online at www.redcrossblood.org. The sponsor code for online registrations is “Salisbury Civic Center.”