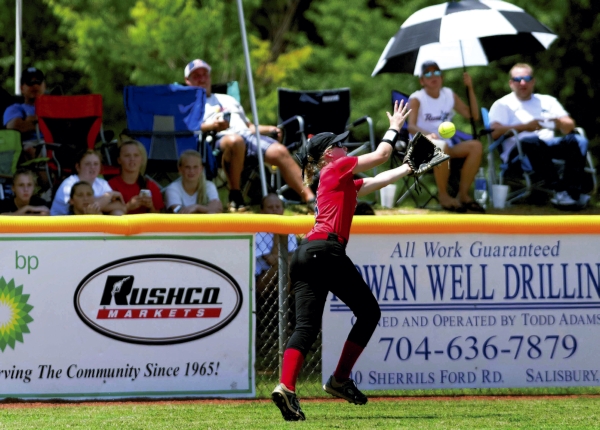 SALISBURY — An outstanding catch by right fielder Rylie Warren woke up a Rowan Little League team that was off to a shaky start, and the Rowan 14U team went on to pound the Florida state champs, 12-1, on the first day of the Southeast Regional.
“Sometimes the turning point in a game comes on defense,” Rowan manager Johnny Meadows said. “This was one of those times.”
Florida’s No. 9 hitter Julia Barlow squared one up in the top of the second and the ball seemed certain to sail past Warren, but she fought the sun and wind and made a spinning catch deep in right field.
“I started back, and I was thinking, ‘Oh, no, it’s over me, and I’m not going to get there,'” Warren said. “But then I pivoted around at the last second and the ball just popped in my glove.”
Even though it was a five-inning, mercy-rule game, it took a while. Scheduled for a 12:30 p.m. start, the game ended after 6 p.m., mostly due to a lightning delay, followed by a rainstorm.
Nothing went right for Rowan in the top of the first inning, as Florida took a 1-0 lead on Stephanie Brennan’s hot grounder that nearly knocked the glove off the hand of Rowan’s diminutive shortstop Hailey Lane.
Lane has a cannon attached to her right shoulder and she’d already whizzed a fastball over the head of Rowan first baseman Imara Harrell that banged off a fence, so Rowan was fortunate to get out of that mess with one run.
“By my count, we made five errors in the top of the first,” Rowan manager Johnny Meadows said. “Two plays at shortstop, a catcher’s interference, an obstruction call, and an 0-2 pitch that wasn’t in the right location.”
Few official scorers would’ve given Lane an error on the ball Brennan smoked, but Meadows has high expectations.
There also was a reason Rowan starting pitcher Kali Morton missed a spot on that 0-2 pitch. She was struggling with discomfort in the collarbone/shoulder area and left the circle for X-rays after one inning.
Morton rejoined her teammates at Salisbury Community Park after the long rain delay. She gave a thumb’s-up gesture, so it’s hoped that her injury isn’t serious.
“She’s a competitor, and you know if Kali comes out of a game, she’s hurting,” Meadows said. “I knew something was wrong. She wasn’t throwing hard. Her velocity was down at least 5 mph today.”
Aubrey Tuell took over for Morton in the circle for the second inning with Rowan down a run and fans getting a little antsy.
“I had some time to warm up, but I was a little nervous,” Tuell said. “But I was more excited than nervous.”
Warren’s catch that ended the second inning helped Tuell settle in, and Rowan’s eight-run bottom of the second took all the pressure off the relief pitcher.
That eight-run inning started innocently enough with an infield hit by Harrell, who sped around the bases and scored on passed ball for a 1-all tie. Tuell walked and courtesy runner Ally Young scored when Lucia Barbon bounced a go-ahead single up the middle.
An error on Olivia Marshall’s two-out groundball to third made it 3-1 and opened the gates for a huge inning. Lane got a run home by beating out a bunt. Jentri Meadows sent a two-run double whistling into the left-center gap to make it 6-1, Harrell’s hustle double made it 7-1, and Young’s single made it 8-1.
“We put balls in play, and we capitalized on some mistakes,” Meadow said.
Tuell made short work of Florida in the top of the third — three groundballs to Lane, who gobbled them up and made accurate throws for routine outs.
“Tuell stays around the plate, and with that big lead, that’s exactly what we needed,” Meadows said.
Rowan tacked on another run in the third and three more in the fourth to extend the lead to 12-1.
Rowan needed only three more outs for the mercy rule, but lightning was spotted, somewhere off to the west, and play stopped.
And then it stayed stopped, as lightning delays were followed by a torrential downpour.
Annisten Christensen pitched the fifth when play resumed. Meadows said she’s the team’s hardest thrower, but control can be an issue.
Christensen did fine, and Harrell, who had moved to third base, ended the game by gloving a soft liner and turning it into a double play.
“It was a really long day for us,” Warren said. “But you don’t mind long days when you’re having fun with your friends.”
Rowan stayed in the winner’s bracket and will play today at 12:30 p.m.
•••
NOTES: The regional winner will head to Kirkland, Wash., for the World Series. … Rowan dressed 14 players, and by the rules used in this age division, all are required to play. That didn’t pose a problem, as Meadows kept a constant stream of courtesy runners, pinch-runners and pinch-hitters going into the game. Florida brought only nine players… Imara Harrell’s twin sister D’Nahjah started in center field and snagged the first out of the game. … The Florida representative won the Southeast Regional and the World Series in this division (Juniors) last year, so Friday’s result was encouraging for Rowan. … Meadows said Rowan has at least seven girls capable of hitting the ball out of the park. … Former West Rowan coach Scott Young, on the mend from a heart transplant, attended the game.