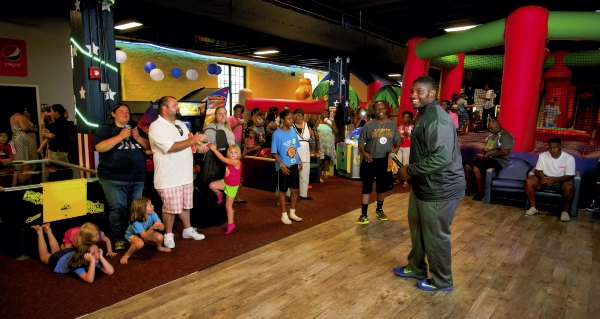 Javon Hargrave arrives at the Bounce City for a free event called "Come in Unity with the Community" on Friday. Parents and children were given the opportunity to enjoy a free hot dog and play on the inflatables, as well as meet Hargrave, a former North Rowan football player and current NFL Pittsburgh Steeler. Jon C. Lakey/Salisbury Post

SALISBURY — Around 300 people attended Bounce City’s Come in Unity with the Community event in the first hour and a half on Friday.

Bounce City hosted the event to celebrate local youth and provide them with activities to keep them occupied during the summer.

Jehan Davis, co-owner of Bounce City along with husband Guanah Davis, organized the event to help decrease crime in the city.

Children from 1 to 16 years old were welcomed with free admission to enjoy food and beverages, music and plenty of bouncing.

Parents and other adult family members were able to sit in chairs nearby, keeping a watchful eye on their children while finding a bit of relaxation.

Rowan Student Leaders volunteered during the event. Dancers from the Triple Threat Studio performed and 2 Girls & a Mic provided music that had the children doing everything from the Chicken Dance to the Wobble to the Nae Nae.

There was also a station where people could register to vote with the Rev. Anthony Smith and Geoffrey Hoy, chairperson of the Rowan County Democrats.

Hoy said he was reminding people to make sure their registration matched their identification and was up to date with their current address.

Jehan Davis said she was happy to see the different ethnicities of the people who attended the event.

“I’m so proud of it because it’s such a melting pot,” she said.

Brenda Miller-Clifton, whose two great grandchildren attended, agreed. She said along with being a great event for the children, it was good that a diverse group of people attended.

“It’s just a good thing to come together,” she said.

Sarah Erickson brought her two kids to Bounce City for the first time on Friday. She said she hopes the events will continue.

“It gives kids something to look forward to,” she said.

Larry Suber’s son is only a month old, but he brought him along to the event. He said the event could keep kids occupied. “It’s good for the kids — something to do to keep them out of trouble,” he said.

One of the main events of the night was an appearance by Javon Hargrave, a Salisbury native who now plays for the Pittsburgh Steelers.

“Don’t let nobody tell you what you can’t do,” he said to the crowd before sitting down to sign autographs and take pictures.

Hargrave said it wasn’t easy getting to the National Football League and encouraged the kids to work hard to achieve their dreams.

“I just want to tell y’all to keep pushing and keep praying,” he said.

Before attendees could get their autographs and pictures with Hargrave, they had to fill out a community survey.

The children’s survey asked questions like when and where did they feel the most loved and respected in the community and what was one thing adults could to help and support them and their friends.

The adults’ survey asked attendees about the missing elements in the community project and what challenges could arise as they continued the program.

Jehan Davis said she did not want to be an event that just told children what they should and shouldn’t do. She wanted to be sure to get input from the youth and community to use for developing the next event.

Candace Hawkins and her two children got a picture and autograph with Hargrave. She said her son Jerimiah Miller, Hargrave’s cousin, was crying from excitement before Hargrave arrived.

“It’s a big deal, especially for kids in Salisbury, to see someone that made it,” she said. She also brought her daughter Ja’Lia Miller to enjoy the event.

Mandy Tew and her son also got an autograph and picture with Hargrave.

“It meant a lot for him to have a positive role model, especially this close to home,” she said.

Naeousha Ramseur and Keshyiah Miller stood in line waiting to get to Hargrave.

“It’s a good opportunity because usually you don’t get to do that,” Ramseur said about meeting Hargrave.

Ramseur and Miller said they had a good time in the bounce houses and enjoyed the food.

Jeffrey Steele said a coach for a basketball camp he is attending brought some of the players to the event.

“Me and my friends are up there dancing to the songs we do know,” he said.

He said he was having a good time.

Guanah Davis said the community has done a lot to help their business, so the event was a way of returning the favor.

“We’re a business that gives back,” he said.